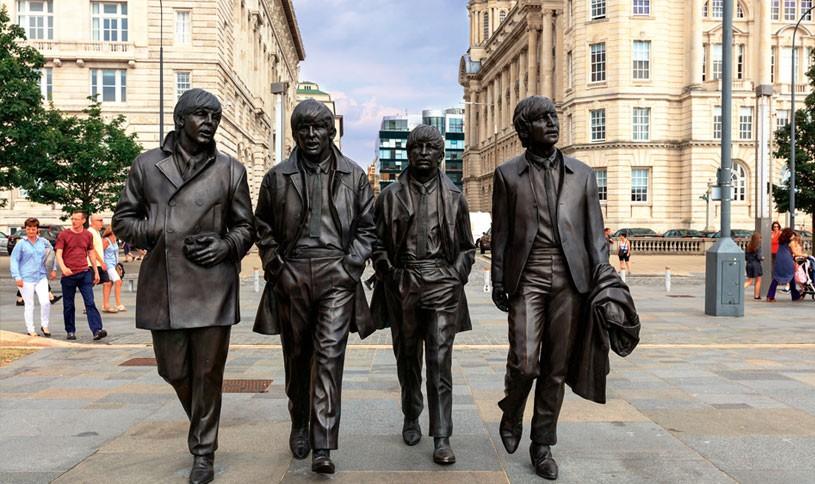 Despite that only two are still with us, signs of the Fab Four are everywhere – including the occasional statue.

You can still stroll down Penny Lane and pass a barbershop (though the fire station never existed – it was perhaps poetic licence) and John Lennon’s home is a shrine. But fab though they doubtless were, there’s more to this city than The Beatles and the 1960s Mersey sound.

When the pre-fame Beatles were playing the Cavern cellar club their city was known more for its docks than anything else. British merchant seamen could be heard on trains and buses heading for “the Pool” to find work on the ships coming and going to all ports on the planet.

While Liverpool moves more freight today than ever it did, it comes and goes from a high-tech container port upriver from the city’s docks. Those docks stand silent now, their heavy cast iron rings that once fastened great ships to the quay, set empty and forlorn in the cold stone.

Much like their London counterparts, Liverpool’s docklands are in a process of rebirth as apartment blocks for a new age of inner city dwellers. One can but wonder what the old dockers might have thought.

But the ferry across the Mersey is still there (more than one in fact) functioning now as a pleasure trip more than a means of public transport – the ubiquitous tunnel industry has seen to that – but still well worth a ride that affords a glorious view of the twin Liver Birds that dominate the waterfront.

The aptly named Dazzle ferry boats (a single glance will explain the name) took us on a round trip on a very affordable ticket. On a cold November day with the boat pitching in what could only have been Cape Horn-style, the round trip challenged the sailor in all of us. The swell even in the river was, well, dramatic.

What could it be like out at sea? (Hardy travellers can find out on the ferries’ annual jaunt up the coast to Blackpool). Back on terra firma, a street stroll tells of a city reinvented where trendy shops and eateries sit comfortably among older edifices steam-cleaned of their smoggy grime. Like the Lennon-McCartney fire engine, it’s a clean machine.

On Hope Street, not far from those docks stand the Philharmonic Dining Rooms. Actually, it’s a pub, a spectacular Victorian pile built by, and for, one of the city’s 19th century brewers.

Named for the concert hall opposite, it has what can only be described as an atmosphere, enhanced by the sign enjoining lady tourists and sightseers to consult a member of staff before entering the gents’ toilet.  Not because of any unseemly sights they might encounter but to ensure the privacy of the male users of the facility where resplendent roseate marble urinals have become an international tourist attraction.

The building itself is Grade 2 listed – while the gents loo gets a Grade 1. A short (ish) walk from the Philharmonic stands the ruined St Luke’s Anglican Church at the corner of Berry and Leece streets.

Built between 1811 and 1832 it is now colloquially known as the “Bombed Out Church” and it’s easy to see why.

Like all of Britain’s (and Germany’s) major cities, Liverpool took a fearful aerial pounding in World War II and St Luke’s has been allowed to stand as a roofless reminder and memorial. But like the city that surrounds it, it’s not a sad place.

Home to exhibitions, activities and curiosities it has an unadorned frankness that reflects Liverpool itself.  Bombed out it may be, but St Luke’s has a future as well as a past. As the song In my Liverpool Home has it: “If you want a cathedral we’ve got one to spare” – and they do.

Opened in 1967 after more than a century of planning and false starts, the Catholic cathedral is a stunning modern circular design giving rise to a central tower that suggests (but isn’t) a steeple. “The Mersey Funnel” it has sometimes been fondly termed.

Never far from controversy, the building has been the subject of a million-pound lawsuit when it was found that the roof leaked and the stunning mosaics were falling apart. But, repaired and refurbished, this bravest of buildings lives on.

The crypt was designed by Sir Edwin Lutyens in the 1920s and work commenced on what was to be the great Cathedral but stopped after the crypt was completed in 1930.

Some reports say the project ran out of money and others that it just ran out of commitment. Whatever the truth – probably a bit of both – what is left today beneath the Catholic cathedral is one of Britain’s great achievements.

A sense of awe is only compounded by a walk through these halls where it’s possible to feel small but not insignificant. It’s just one of the myriad attributes of this special and treasured place that is also home to concerts, exhibitions, private functions and – again only in Liverpool – an annual beer festival.

And as in most of England’s great northern cities the people aren’t so hard to meet. The woman beside me on the bus gave me her life story in 14 stops.

Continue Reading
You may also like...
Related Topics: russell hunter, the beatles