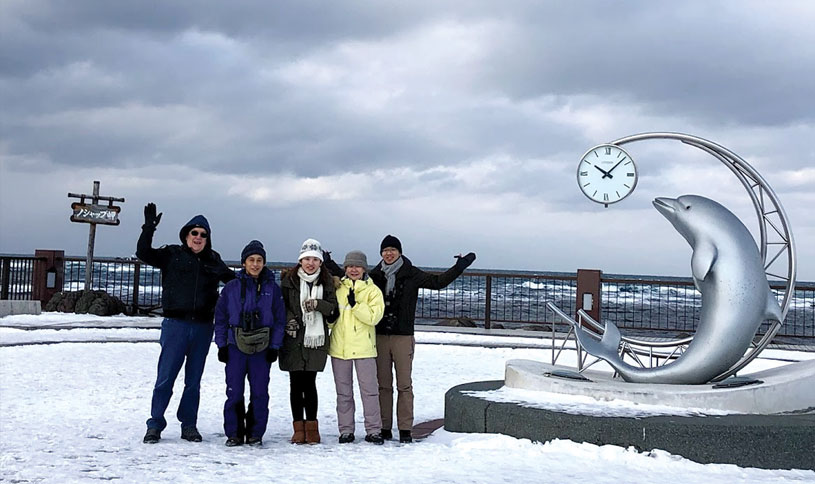 Hokkaido is the big island to the north and the home of Sapporo beer. It’s rich in history and sensational natural beauty with an abundance of wildlife including the Tancho crane, Japan’s avian figurehead.

It’s an auspicious bird once thought to be extinct. With distinctive white and black plumage and a red crest, the Tancho crane has been called Surround Kambui (deity of the wetlands) by the Ainu people since ancient times.

It is also revered as a symbol of a good marriage because the birds stay together in mating pairs for their entire life. The depth of this devotion is evident in the anecdote about a wounded male who could not fly so carried food from a feed site to his family faraway on foot.

The original habitants are the Ainu people, who have been here for thousands of years, many of them still observing ancient customs and beliefs. Using bird feathers for clothing, gathering food for winter and following traditional song and dance is part of their lifestyle.

But firstly, let’s talk about the weather. I travelled in early January when the temperatures ranged from around 0C to -20C. This creates huge amounts of the finest powder snow that skiers love.

The island is dotted with ski fields and resorts. The best, they claim, is Niseko “the prince of powder” which has many resorts and about 1000ha of skiable snow. Most resorts also feature the Onsen or hot springs, said to be so relaxing you can hear the snowflakes falling.

For those wanting to go at a warmer time, agriculture is the mainstay of the island.

The freshest of products combined with Japanese methods of preparing food creates a gourmet heaven. In winter, the Ramen style was an ideal warmer to prepare for the outdoor challenges.

Everyone tends to have a personal flavour preference with their noodles, but why not try them all before you make up your mind.

In spring and summer, the weather is mild with little humidity, making it ideal to explore the wonderful listed national parks and wildlife reserves.

A two-hour flight from Tokyo lands at Wakkanai, the northernmost town and capital of the Soya Sub prefecture of Hokkaido. In the Ainu language, Wakkani means “cold water river”.

Cape Soya is as far north as you can go, and they say that on a clear day you can see the Russian island of Sakalin. We were lucky to see more than a few hundred metres courtesy of a snow storm.

Heading South we arrive at Toyotomi, gateway to the sensational Sarobetsu Wetlands and wilderness area.

A visit to the centre is a must, and it’s here that you can watch a video of the year-long changes to the 20,000ha of nature at its best.

Nearby is Lake Saroma, the largest brackish lake in Japan and year-round home to a huge selection of wildlife. It’s where I see my first Tancho crane. The lake is separated from the ocean by a 25km sand spit which protects some special flora and fauna.

Furano is a more laid-back destination famous for rolling fields of lavender and other summer flowers. In winter, top-class skiing and snowboarding opportunities are on offer in this scenic rural area.

Abashiri City is on the ocean and is noted for the drift ice in the Sea of Okhotsk as well as its museums, national parks and wildflower reserves.

As it was -20C in January, I really appreciated the heated footpaths when checking out the city.

Liverpool more than a Beatles tribute