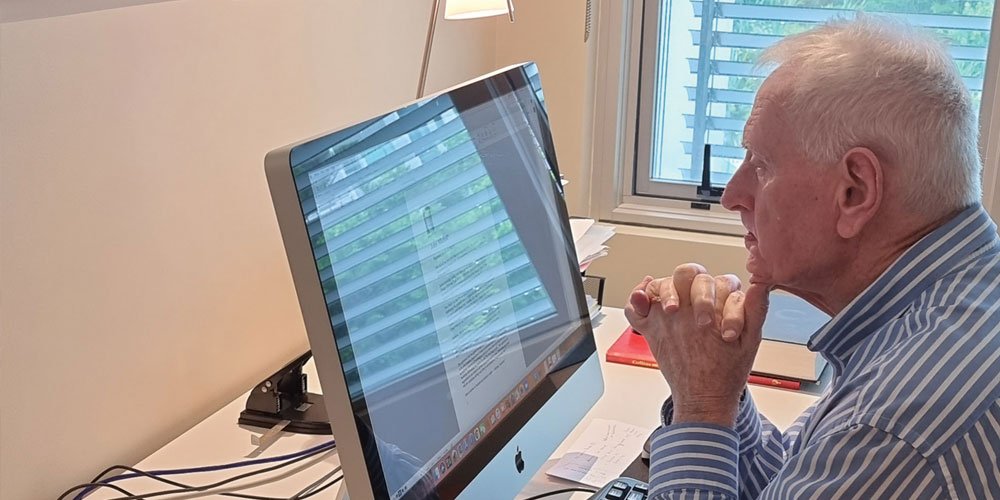 Many of us, when we finally stop working, take things a bit more slowly. We spend time in the garden, the kitchen, with the grandkids.

Some travel and others prefer to stay home. While ignoring none of these, former lawyer-diplomat John Michell has become a writer.

The author of two books, John, who recently turned 71, is an avid reader who is still learning from the best, none of whom he ever expects to even closely equal.

Both books, Dublin Zoo and The Far Grass are heavily influenced by his professional experiences — his 33 years in the diplomatic service in particular, and especially the aggregated 21 years he spent abroad.

His long-term overseas assignments included Moscow, where he witnessed first-hand the collapse of the Soviet Union, London, Washington DC, Port Moresby, New Delhi, Honiara, and Trinidad and Tobago where he was Australia’s ambassador to the Caribbean.

John served as chief negotiator for the Australian-led Peace Monitoring Group on Bougainville, Papua New Guinea. He was political adviser to the Solomon Islands Ceasefire Monitoring Council and deputy head of the Australian mission in Dili, East Timor, where he headed the mission’s political section during East Timor’s bloody struggle for independence.

So why did he choose to write?

His career had always involved writing, so “in 2017 I made a snap decision to write full time.”

The diplomatic corps had always insisted that reports must be a certain length.

“They had to be succinct and readable,” he says. “I decided to write longer than they wanted and then had to go over it and cut it back without losing the meaning, a bit like a sculptor with a block of stone.”

Now, however, before he gets to that stage, John Michell the novelist – as opposed to Mr Michell the lawyer or diplomat – has to find and mould his characters.

“I usually arrive at a fairly clear idea of who the main characters will be and what they’ll do,” he said.

“That largely comes as a result of gaining knowledge of events and times.”

But that’s something readers can decide for themselves ­— whether or not it works.

Dublin Zoo, a thriller set in Europe’s inter-war years, was published in February last year and The Far Grass (the title references those lonely cricketers posted to faraway outfield positions) last November.  Both are works of fiction.

He wrote the draft of The Far Grass first but set it aside “until I sorted out in my mind some possible legal complications that might arise from my previous work.”

He returned to the draft only after Dublin Zoo was published.

“My writing takes an internationalist perspective given I was a diplomat for 33 years, 21 of those spent abroad from Australia,” John says.

“Added to this I have a keen interest in history and as a result both my books are set in frameworks incorporating historical international events.”

But, as with all authors, readers can be hard to come by. In fact, for most writers, getting published – getting past the gatekeepers who decide what will and will not see the light of day – is much more gruelling than the effort of crafting a book.

Today’s relative ease of self-publication has come as a welcome bypass.

“Given the nature of my books, they’re most likely to appeal to older readers who can recall the historical events of which I write, or at least enjoy the nostalgia of those earlier times – the type of person who typically would read Your Time,” he says.

“There’s also the fact that I’m an older bloke who continues to rage against the dying of the light as I now embark on my third novel.  Indeed, one of my key tenets is that age is an aid to writing rather than an impediment – after all it’s the garnering of experience and not laying bricks.”

But like most “emerging” writers gaining profile is a constant struggle.

“I can say, though, the feedback I’ve had from the small pool of strangers who have read the books, that is, neglecting the unconscious bias of family/friends, has been very strong.”

John – like probably the majority of those who write today – self publishes.

But there are still mountains to climb. For without the marketing muscle of a mainstream publisher it can be hard to reach those elusive readers.

“It can be difficult to get your book in front of people,” he says. “Apart from social media which I don’t especially enjoy using, there’s the traditional media, contacts who have contacts and so on. But it’s not at all easy.

A firm believer in quality – quality of writing and quality of content – John aims his books at the over 50s based on his own knowledge of history and international affairs.

“They’re more likely to have a knowledge of modern history,” he says. “Yes, there is some nostalgia there and I think if I can write with clarity, that this group will understand and respond. Age is an aid to writing.”

His books can be found at fishpond.com.au and inhousebookstore.com.au

Continue Reading
You may also like...
Related Topics: our people, russell hunter