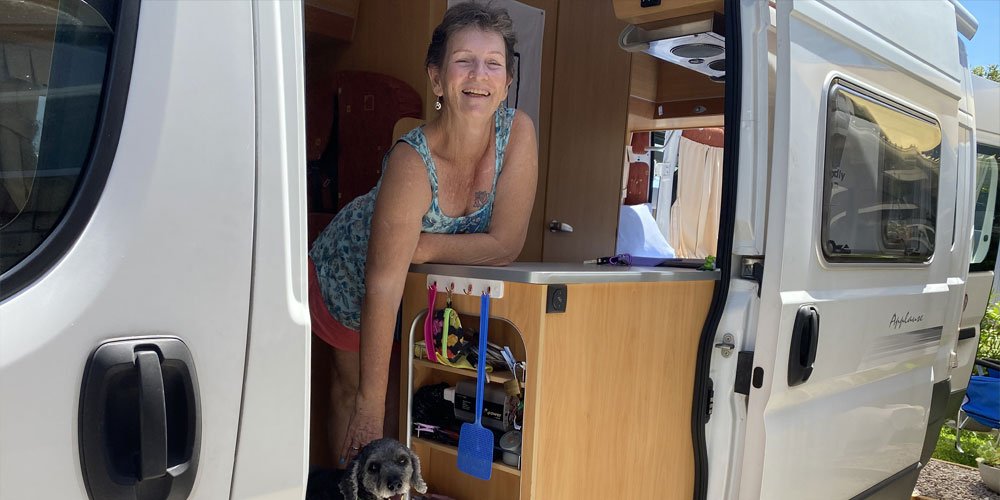 Married for 40 years and raising three sons and a daughter, Sally came to the conclusion that after turning 60 she should have her “me” time.

So, two years ago, she divorced her boat-loving husband, bought herself that long-lusted after motorhome and took to the road.

And she hasn’t looked back.

Along with her pampered poodle Lewis, she’s already driven most of the length of Australia’s east coast – on her own – and regularly ducks off for weekends away at destinations that take her fancy.

But it was her sister’s chance sighting of an advertisement that really took her wanderings to a different level. It was a plug for Rolling Solo, a women’s camping, adventure and road tripping group.

Sally, now 63,  signed herself up two years ago and found herself part of a happy group of like-minded mostly single women. Calling themselves Rollers, they love driving motorhomes, towing caravans or just camping solo around Australia.

While Covid-19 and state border closures stymied some of her planned adventures, things are winding up and she can embark again on her sojourns with as many or as few of the new Rollers friends she has now made, along the way.

Through smartphone apps and links, Rollers post where they would like to go and other members see whether they want to join up on the latest adventure or stay put.

The app details the cost of destinations, things to see, camping facilities and whether it is dog-friendly and for Sally, it’s just a matter of throwing some supplies and clothes into her 2008 A Van Applause 500, popping Lewis in his preferred seat, and driving off. While her daughter sadly died of leukaemia at the age of 10, the youngest of Sally’s sons, Jeffrey, 24 (the other two are 28 and 35) is handy enough to give the mechanics a once over and water the plants while she’s gone.

She originally began her travels in a 23-foot van, but found it too big for just her and Lewis, so she recently downsized to her current automatic, 19-footer.

With comfy swivel seats in the cockpit, a dining table, kitchen, bed, shower and toilet, it’s perfect for either camping grounds or free camping.

“It’s fantastic. I’d been wanting to do this for years but my ex was into boats and he wanted to spend the next 20 year on boats going up and down the coast. I wanted a motorhome, that was my dream,” she says.

Sally had worked most of her life in the family business doing the bookwork and logistics for the fishing trawlers her husband operated.

“The day after you fall in the same hole but get back out. On the fourth day you walk around the hole. On the fifth day you simply go down a different road.”

“I just decided to can’t live like this any more and within a week I had left my husband,” she says.

Now Sally’s road stretches ahead as near or as far as the mood takes her and she couldn’t be happier, enjoying either her solitude or the company of fellow Rollers.

One of her big adventures this year will be attending the fifth annual Rolling Solo Stuck in the Middle at Alice Springs, a seven-night stay which warns of plenty of red dirt everywhere.

“Going out west is just gorgeous and we do a lot of free camping. People seem to be a lot friendlier,” Sally says.

“I’ve never felt unsafe. I just don’t think about it (security) too much. If you did, you’d just sit here and do nothing.”

Sally says most of the Rollers are single women: “We are all in the same boat – divorced, widowed or husbands that don’t want to come – although some men do join their wives or partners sometimes.”

She estimates she spends about four months of the year rolling solo and says the support and friends she makes from her $46 a year Rollers membership is well and truly worth it.

She travelled 4000km last year, even with Covid-19, and so far this year has notched up 2000km, which included meeting up with Rollers at a music festival in Agnes Water.

And trips don’t have to be long ones.

The other week she fancied a weekend at Pomona and put her plans out to other Rollers to see if anyone else wanted to join her – and it wasn’t long before new friends came rolling in.