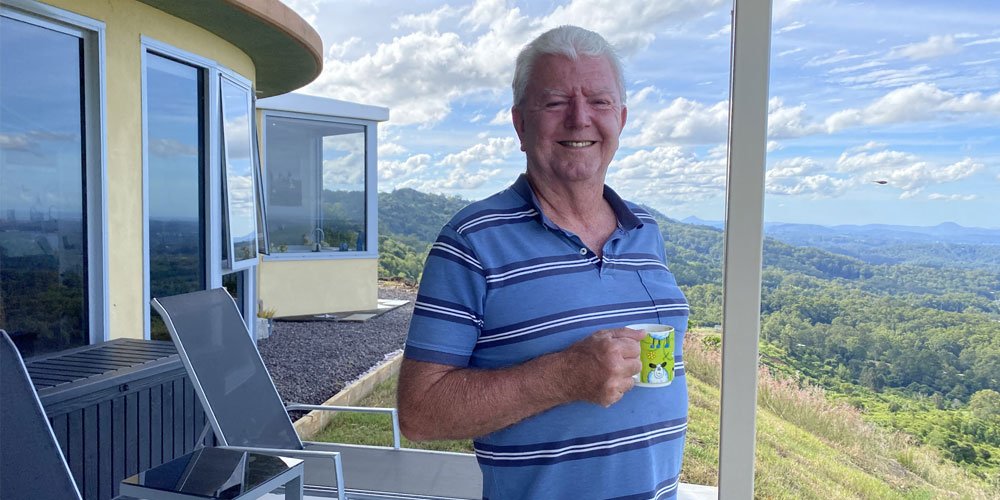 As a child, Peter Buch’s ultimate dream was to jump off the nearest hill clutching a sheet at both ends and simply glide away with the wind.

So it was natural that as a young man his fancy turned to hang gliding, which he took up with enormous enthusiasm at age 18 as the ultimate escape from his land-bound job as a carpenter.

But not long after learning to fly, an accident at work damaged his knee, an infection set in, and he faced the grim reality that the days of wrangling a heavy hang glider and its associated gear were out of his reach.

But disappointment soon became excitement as he tried a switch to a much lighter paraglider – basically his childhood dream of a sheet – but with a harness and manoeuvrable strings which enable the flyer to catch the wind and silently glide over often enormous distances.

“My knee was bad but I could do it. It was like deja vu from when I dreamed I could fly by throwing a sheet in the air and taking off,” he said.

Peter was hooked. But the trouble with paragliding is that takeoff and landing sites were few and far between around his Sunshine Coast home, so his new dream became one of actually owning his own paragliding site.

With his knee injury putting paid to a lot of his building work, Peter took over from his father running the family macadamia farm at Peachester for around 15 years and also did a stint as a taxi driver in Brisbane.

He and his wife Sue, a school teacher, also caught the travel bug and travelled overseas extensively and went paragliding in exotic locations – before Covid-19 hit.

Sue was also a keen paraglider until she hurt her back during a rough landing.

Peter always thought his dream of owning a paragliding site was out of reach until they heard of about 12ha of land for sale directly below Gerrards Lookout along Balmoral Ridge between Montville and Maleny.

Sue had just sold the family home she had inherited at Caloundra, and Mrs Gerrard who had inherited the steep acreage, had had it on the market for some time.

The stars aligned and the Buchs bought the land, and engaged retired engineer Peter Parnell to solve the problem of building a home on the almost perpendicular site.

The solution was an earth covered home tucked into the side of the hill, with the perfect paragliding site just above the roof and multiple landing sites accessed by a track in the valley.

Fast forward 12 years and Peter, now 64 and fully retired, has realised the dream of a lifetime. He can walk out his front door any time the wind is right and simply jump off his roof and sail off to wherever the breeze takes him.

“I’m on top of the world. I feel like I’m standing on the rail like they did in the Titanic movie.”

If he’s feeling lazy, he can simply sit with a coffee on his front patio and watch his mates in the Sunshine Coast Sports Aviators Club whirl and twirl above him.

The club has almost 900 members – some aged in their 70s and 80s – who glide at sites from Gympie to Redcliffe.

On a good day there can be between 12 and 20 people taking off from Peter’s roof – sometimes flying as far as 250km west.

“You’re flying and looking for thermals … looking at the sky for what is happening ahead of you. Thermals generate clouds and you follow the birds and the grass seeds as you see them go up and fly from thermal to thermal.

“It’s just terrific, any time the wind is on.”

While Peter Parnell did the engineering, Peter himself did most of the building on his unusual two-bedroom home, working away gradually as time, health and funds permitted. Only the tiling and plastering was too much.

With an outlook from every room that embraces the Sunshine Coast from Caloundra to Noosa, living on top of the world is never dull and Peter says he has to pinch himself every day that his dream is now a reality.

While he has power connected, Peter hopes to eventually go off grid and use solar and a windmill to generate their electricity.

He says the hardest part of building the home was underestimating just how long it would take – with huge boulder retaining walls, a massive steep driveway using hundreds of cubic metres of concrete and giant concrete skylights (pictured) which flood the home with natural light.

A bonus when he was building – and had a temporary bedroom setup in the garage – was that he could lie in bed and look up through the skylights to see cows grazing just above his head.

Now he and Sue can sit in bed and watch the sun rise over the Sunshine Coast or marvel as storms roll over the hills.

They still have a hankering to travel again when restrictions lift, but Peter says that when they returned from their last overseas trip in 2019, they walked into their earth home with the magnificent view and realised there was nothing to beat it. 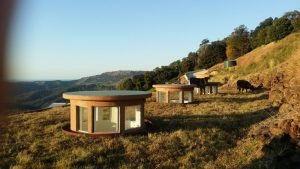