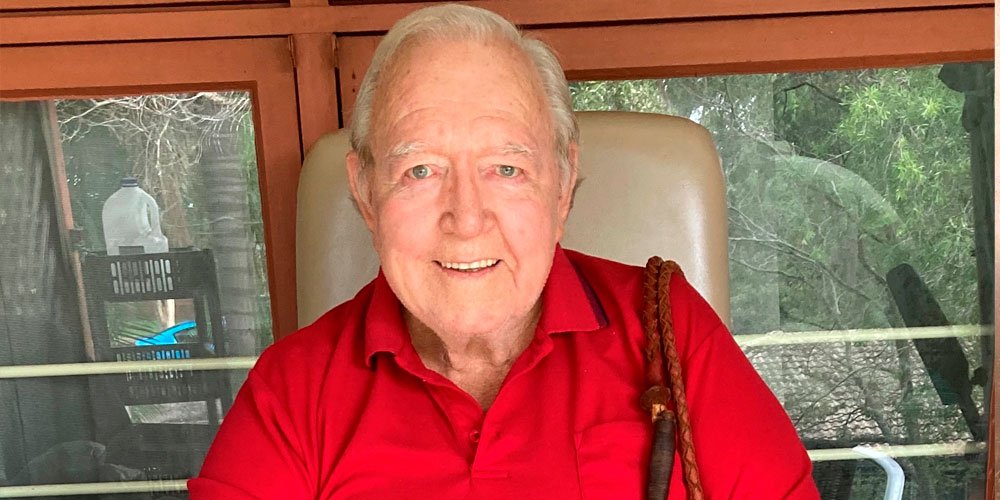 Why do people write poetry? Not for the fame and certainly not for the money – but that doesn’t put so many people off.

Certainly not Peter Tyler, now nearing his 80th birthday, who has been writing poetry for most of his life. He writes because he likes to.

“It’s for my own enjoyment and sometimes that of others. There’s no fiscal reason,” he says.

Peter’ passion for poetry began at a young age. Attending a country town school and through wandering the paddocks whenever he could, he avidly absorbed the life and legends of Banjo Paterson.

“I loved horses and I would go off to the paddocks to pat them. There was a big paddock in town that fairs, and rodeos used to use,” he says. “Once a year there was a rodeo, so I went down to see the horses.

“I remember there were men sitting on logs around a fire. One asked if I like horses. I told him I did so he said I could go over to where they had the horses and tell the men there that Banjo Paterson said I could pat the horses.

“So, I did. At school, I soon learnt all about Banjo Paterson and his poems and could not get enough.”

While at Marist Brothers Lidcombe in Sydney, Peter wrote a poem to enter into a competition at school.

“I read it to my friend Ronnie Williams. He liked it so much he wanted me to write one for him. His won the competition and mine came second.”

A love of poetry – and competitions – was born.

“I have won four Queensland championship trophies. When I was 50, I joined the Beaudesert Bush Bards”.

Throughout a life of letters, Banjo Paterson’s work has never been far from Peter’s mind. That and some of Rudyard Kipling’s output has been his inspiration.

“Banjo is my all-time favourite,” he says. “But the best poem for me has been Rudyard Kipling’s If and also Desiderata. I find them to be a good guide in life.”

Peter’s a bushman through and through. His love of horses and dogs shines through in his verse as does his sheer joy at the outdoor life.

“I’ve always been a horse and dog lover,” he says. “It’s impossible, of course, to keep either here where I am now, but I well remember the last dog I had. He was a blue heeler, the finest creature God ever put on His earth.”

Peter recited a poem on Valentine’s Day for fellow residents at his aged care home. It’s something he saves for special occasions.

Throughout his life the Australian bush has been his muse – as reflected by his admiration for Banjo Paterson.

“Bush poetry is my passion,” he says. “Occasionally people comment that there is a similarity between my work and that of Banjo Paterson.”

And he’s had an impressive range of occupations that have all contributed to his abiding passion for bush verse.

“Most memorably, while in New Zealand I was a guide and took people on trail rides through mountains. I love horses,” he says.

There’s a plaque in a Sydney golf clubhouse where his son was a pro. Peter has recited a specially written poem for the Care Flight Annual Dinner. He has written special poems for the bush fires – The Gallant Fight and Bush Fire Heroes.

But his own favourite is Old Blue – a poem dedicated to man’s best friend. Of course.

Peter’s getting on now, but he still has the will to write.

“The tremors affect me now,” he says. “They thought I had Parkinson’s but the tests said otherwise.”

Then they told him it was something called essential tremors.

“But I reckon that’s bullshit,” says Peter. “There’s nothing essential about them for a start.”

Nevertheless, those tremors have seriously restricted his poetic output.

“Yes, they’ve made it difficult,” he says. “In my mind the poetry still flows but it’s hard to get it down – and I’d find dictating difficult.”

That said, it’s hard to imagine Peter won’t find a way to add to his repertoire of many hundreds of poems.

We had watched him asleep after mustering sheep when you’d
swear the old bugger was dreaming with his farts and his
twitches he would have us in stitches,
we’d laugh till our eyes would be streaming

But the way bluey shook made me think he was
crook and I thought of that bloody distemper.
Now that’s something I’d hate
`cause Blue was me mate, we’d lost
one that way in December

As I stood up to check on just what the heck
was making him act up this way, he leapt straight at me,
he could jump like a flea
and he knocked me clear out of the way

As I fell, I could see what my mate did for me
the taipan strike just missed my face but the fangs struck instead
behind old blueys’ head he saved my life, but took my place