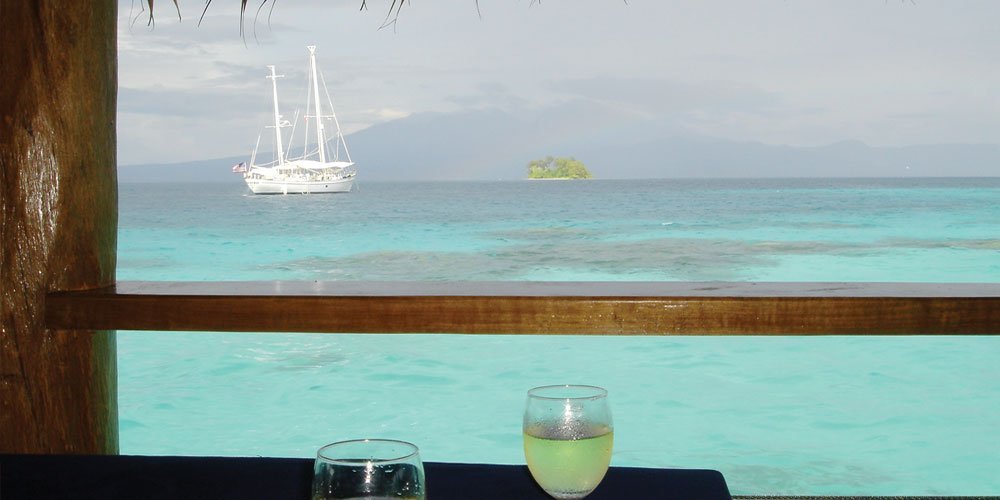 An idyllic tropical experience sitting on the verandah at Fatboys in the lagoon.

I keep returning to the Solomon Islands, in particular the Western Province, because frankly, I’ve not found another South Pacific island group which hasn’t been westernised.

Having said that, I do not include Honiara on the main island Guadalcanal as this is where island culture meets western; shell money meets credit cards, which works for some, as the culture is real and parts of the island stunningly beautiful.

But there are 922 islands/islets in the Solomon chain, and Ghizo in the Western Province is the second largest.

Here is where you can experience natural beauty and island culture with just enough western trappings to make the experience comfortable, but still enjoy a tropical marine paradise. The coral reefs are easy to access and the food quite literally fresh from the vine or the ocean. 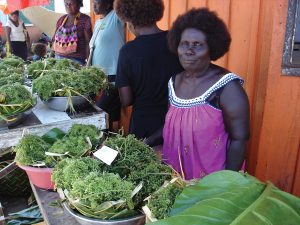 Seaweed for sale in the local marketplace.

And you can drink the water that comes direct from the clouds.

American-born Danny Kennedy and his Australian-born wife Kerrie have spent the past 30 plus years building up Dive Gizo to be one of the top tour and dive operations in the South Pacific.

Danny is now a citizen and a retired elected minister of the Solomon Island Western Provincial government.

As well as their PADI licenced dive operation, Danny and Kerrie have extended into all aspects of tourism which includes accommodation across the region, butterfly/bird watching, mountain climbing, or organising the unique experience of spending a few days in the guest house of a local village.

A favourite of mine is an island lunch following a boat ride out to a deserted tropical islet.

You take one dolphin fish (mahi mahi), chop into cubes, cook over an open fire on an old metal plate, add a touch of oil, and soy sauce and serve on the large, flat kerosene tree leaf.

As one Irish medical student commented, “I couldn’t afford a meal like this in the United Kingdom.”

Nor would you get the view.

Pristine golden beaches, turquoise waters lapping over coral, and the glorious and luxurious sounds of silence.

For Yumi Endo, a Japanese tour guide, who spends her working life in major cities of the world, the glittering starry night sky was an event in itself.

“It is the first time in my life I have ever really seen the stars,” she said.

I’m a scuba diver and Danny first took me diving on the Japanese wreck Toa Maru in 1986.

He has ear-marked many more stunning dive sites over the last two decades.

They range from coral walls to a Hell Cat fighter aircraft which crashed in these waters during World War II.

For divers and snorkelers, the greatest (in my humble view) addition to the Western Province has been the construction of Fatboys on the island of Mbabanga, an easy canoe ride from Gizo and the recently-sealed Nusatupe airport.

Constructed on piles well out into the lagoon and connected by a long jetty to the island and accommodation cabins, this is a popular pull-in spot for cruising yachties, and those who want a true tropical island experience. 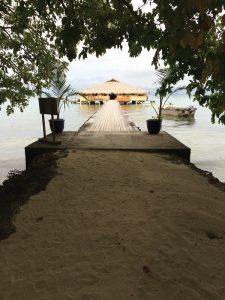 Fatboys is the meeting and eating place.

Fatboys famously had a waste disposal system which utilised a dingy parked under the lavatory.

Today a modern home sewerage treatment plant does the job.

Tucked under the trees overlooking the lagoon, there is a well-tended vegetable and herb garden. This is a culture of subsistence farming.

Thus, when we sat down to an entrée of king fish sashimi with wasabi, the spring onions came with a tangy just-picked, fresh flavour.

As did the bush lime drink.

Further down the lagoon and closer to the major village of Munda is the island of Lola, home of the well-known Zipolo Habu Resort.

Joe and Lisa Entrikan established this originally as a fishing resort back in the early 1980s, and it still attracts professional and amateur line-throwers.

They have also embraced some modern technology with a satellite dish and a large and effective hot water system.

Water on this island comes from a spring.

Back in downtown Gizo, a notable difference since my first few visits, is the invasion of mobile phones and that western habit adopted by young people, of walking around with a vacant look and ear plugs connected to a music machine. 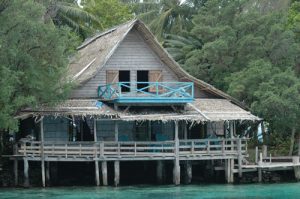 Water views don’t get much better than at Orovae guesthouse on the lagoon.

Even with the advent of satellite communication (one channel television, chocolate ice cream and canned chilli tuna, the Solomon Islands is still a third world nation, constantly under threat from northern nations anxious to expand or extend fishing and logging rights.

Locals know full well, the power supply is unreliable at best and because they are expert at subsistence farming, fishing, hut and boat building, their lives aren’t seriously affected if they cannot get the internet.

A trip here is one with a difference – Solomon time. What can’t be done tomorrow, maybe can be done the day after?

You don’t need hot showers, as it is hot in both summer and winter.

The ocean waters are a comfortable 28C to 30C; the rain when it falls is heavy, but the storm clouds move fast, and blue sky appears again within minutes.

The vines are heavy with richly perfumed flowers.

The food is fresh. Frozen storage is virtually unheard of in these parts.

A couple of bars, a couple of little eateries, but other than that, the daily Gizo street market is the hub off life here.

Is there a downside? Yes – western culture, introduced rubbish.

But even then, it is hard to mar the absolute tropical beauty of these islands.

And it doesn’t diminish the friendship of the islanders.

Continue Reading
You may also like...
Related Topics: the Solomons, travel