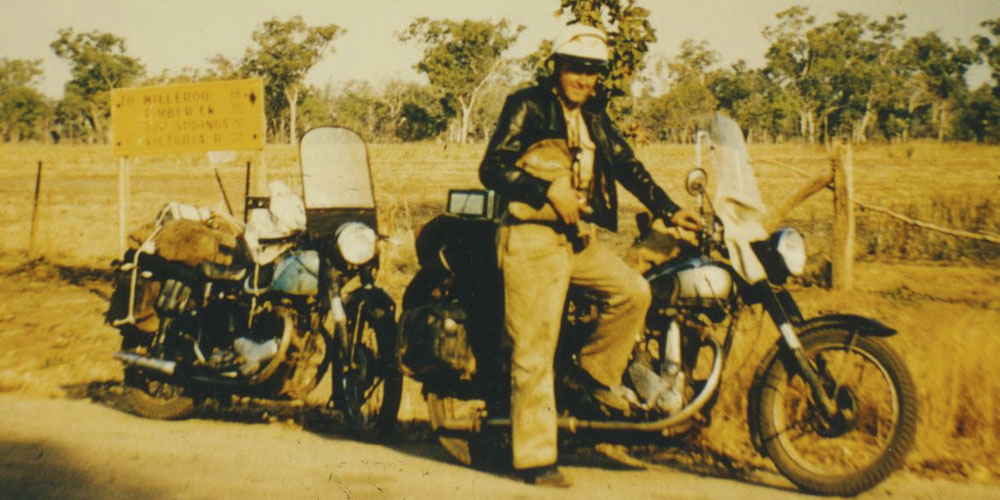 John Sharp on his Australian motorbike adventure in 1957.

My friend Tirrell Brown and I were enjoying the freedom of motorcycling far from home in Australia’s north-west in 1957, but daytime temperatures were quickly increasing. It was burning hot.

The main road was marked on our map and looked the same as any other main road. It was normally a dusty dirt track meandering its way west but had copped a hammering during The Wet.

It had turned into soggy clay, the consistency of wet cement, and low boggy spots had suffered badly as locals ducked their way through and around them.

The result now, was a myriad of tracks going every which way. At times we had no option but to navigate by the sun, and were thankful when we happened on the track again.

Once, we dead-ended at a station windmill and had to back-track for miles.

The wide, open plains were full of surprises. A kangaroo, startled by the noise of our engines, hopped out of nowhere and hurdled over us.  A willy willy developed as we watched, sucking dust and debris into its vortex as it wandered every which way across a landscape devoid of vegetation.

Above this performance, ever circling, were wedge tailed eagles, whistling kites and assorted raptors that joined the circus hoping for gifts of food from the wind god.

One morning, a pair of emus streaked across our bows, their heads sideways, taking in the strange vision of a couple of slightly mad motorcyclists. Unknowingly, they were on a doomsday course with a barbed wire fence, and within the blink of an eye, the dynamic duo had been transformed into a noisy collection of feather dusters and long, skinny legs wildly kicking the air.

Not another soul had approached us in two days, then a vision floated into view, trailing a massive tail of dust. It was a battered Land Rover camper.

We slowed to a stop and they pulled in beside us, wound their window down, and we were rewarded by the sight of a smiling young couple. We exchanged G’days, and the girl held up, unbelievably, a bottle of clean water. “How about a nice cold drink?”

We were gobsmacked. Imagine having a kerosene refrigerator in a camper! 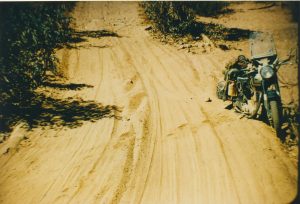 Battling the bulldust in Cloncurry.

For weeks we had nothing but artesian water from station bores and windmills. We’d imbibed more salts and minerals than a pharmacy stocks.

On rare clear days, the landscape shimmered from early heat, then mirages appeared in the distance, making the scrubby bush appear to float as if on an ocean. About midday, some substantial trees floated before us, and close by, a corrugated iron shed.

A door opened and a striking young woman appeared with a baby in her arms. A blue heeler stood guard beside her. She reached down and scratched behind his ear. Was this tableau a reality, or had the heat sent us troppo?

We cut our engines and her big smile lifted our travel-weary spirits. Two young children appeared and clung to her skirt. We talked for a short time, and she almost begged us to come inside out the sun.

Laura and her husband Peter owned the massive property we were riding through. The children soon forgot we existed and carried on with their play on the hard dirt floor of their simple home.

To one side were beds made from bush timber with mattresses from feed bags wired in place. A kerosene refrigerator struggled with the heat.

Laura sat at a table of rough-hewn timber, and we made ourselves at home. She was obviously lonely, and her words flowed like a long-dammed torrent.

A Southern Cross windmill was turning over lazily, sending a trickle of water into a high tank supplying the house and horse trough.

As darkness approached, Laura went outside and started the diesel generator. Light flooded from the openings of the building and the air became alive with flying insects.  Shortly, we heard the sound of horses approaching and Peter arrived, leading a small team of Aboriginal stockmen, their sweat-stained clothing caked with dust from the day’s mustering.

The stockmen walked to their camp and we retired inside, where two young Aboriginal girls had prepared a meal of a great slab of steak and boiled vegetables.

Graciously, we were invited to share the food.  Above the table, a solitary bulb hung on its wiring from a roof beam, and Peter brought out a bottle of rum. We talked for hours. Suddenly, the diesel noise stopped, and the room became pitch black. The generator had run out of fuel.

It put a blanket over the evening, but was the latest night we’d had since leaving home. We lay our swags on their dirt floor and slept like logs. Peter left early, and we were saying farewell when an Aboriginal Elder came up. He lowered his eyes, and said softly, “Missus. Our people have something for the travellers.”

He handed Tirrell an emu egg, but not an ordinary egg. This was very special, with wonderful renditions of native animal life painstakingly carved through the dark green texture to reveal paler colours beneath.

How could we ever thank someone whose ancestors have been on this land for over 70,000 years for such a precious gift.

Have a whale of a time in Hervey Bay