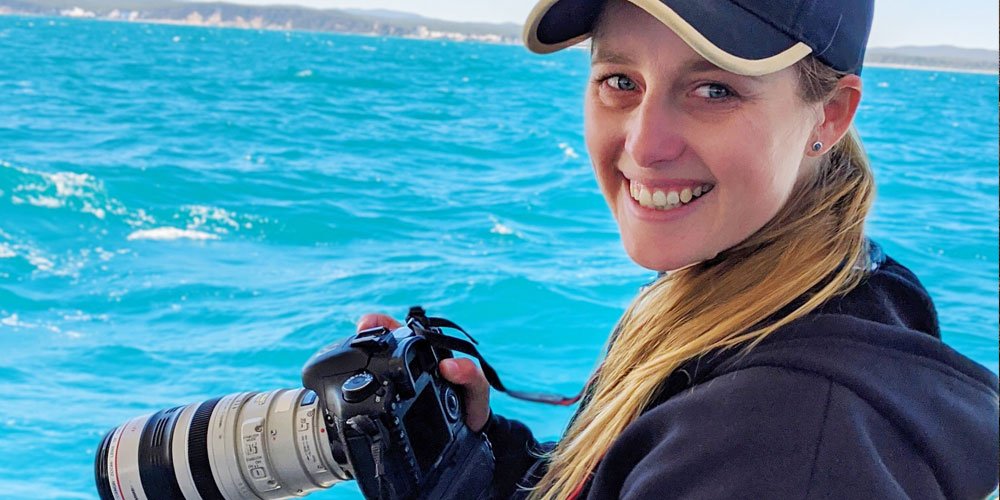 Hervey Bay, a beautiful spot, 280km north of Brisbane, is the equal of any coastal town in Australia.

Considering that about 30 per cent of the 23,000 humpback whales that migrate along Australia’s eastern coast between mid-July and early November each year stop here to rest and play, this is definitely the place to be.

We arrived early for our 2.30pm departure and were told that the strong northerly winds would make the trip out to see these amazing creatures a bumpy ride. It’s a credit to Pacific Whale Foundation that they give you the option of rescheduling the tour or obtaining a full refund if anyone in your party is prone to sea sickness.

After my Gold Coast trip, I felt some trepidation, but we took the risk and it was certainly worth it. Thankfully, no one was sick and many laughed gleefully as the boat crashed into the waves.

It was about 45 minutes before we sighted our first humpback but because it was close to a sandbank, the captain opted to not disturb the exquisite mammal and kept going. A few minutes later we saw our first pod but they were shy and not coming up to play.

You need a fair slice of luck with whale watching but patience and persistence are definitely rewarded. Some chatter on the two-way radio between boat captains in the bay and we were off again.

Finally the magical moment arrived when we spotted a mother and her calf playfully breaching.

It’s an awe-inspiring sight as these magnificent animals, weighing up to 40 tonnes and around 15m long, propel themselves out of the water, twisting and throwing out a pectoral fin before re-entering the water.

This is where the dilemma between enjoying the experience and trying to capture that killer photo comes into play. I would suggest focusing on the former because unless the whales are close to the boat or you have a telephoto lens, you’re probably not going to capture an award-winning shot.

The no-approach zone by law is 100m so this is a show you’ll likely experience from a distance. But you may get lucky, especially if you take the tour in the early stages of the season, which starts in July.

“Every day is always different,” says Dr Kate Sprogis, a marine biologist and researcher for Pacific Whale Foundation, who was on board to help spot the humpbacks.

“Sometimes at the start of the season (July) you’ve got the sub-adults, or teenagers, and they definitely come around the boat.  They’re very curious and don’t have a lot going on in terms of being reproductively active, whereas the adults aren’t interested in the boat as much because they’ve got other things on their mind.

“The mothers and calves are busy with their own lives as well. The mother has to save a lot of energy because she’s giving all her energy to the calves with her milk.

“You never know what you’re going to get and it all depends on the weather.”

Sally and Alan Dennison, from Maryborough, who took their nine-year-old grandson Isaac from Brisbane on the trip certainly loved the natural spectacle.

“I thought it was great. I’ve actually never seen so many breaches and we’ve been twice before,” Sally said.

Young Isaac actually enjoyed the rough seas in Platypus Bay off the world heritage-listed Fraser Island. And for grandparents wondering what their grandkids are most likely to ask Dr Sprogis about the whales, it’s their bowel movements. 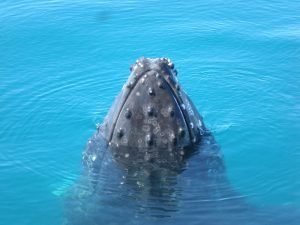 “When they find out it’s 12 months and the mothers give birth to a calf the size of a ute, they’re like ‘woah’.”

For the record, whale poo is usually a pinky-red colour and is a key nutrient for the ocean environment, creating “pastures” for small fish and krill to feed on.

Local celebrity Nala, a female humpback who has returned to Hervey Bay every year since 1992, is the inspiration for a sculpture in the town built in 2012.

But those hoping to catch a glimpse of the famous white humpback Migaloo will be disappointed.

“I would love to see Migaloo,” Dr Sprogis said. “He hasn’t been seen here in Hervey Bay for several years. They say he goes on the east side of Fraser Island. You have to stay 300m away from him because all the boats go out and he gets harassed.”

As for Hervey Bay, it’s the perfect spot to relax and unwind. Enjoy some fish and chips on the Esplanade and you never know, you might spot a pod of humpback whales playing in the distance.

Daniel Pace toured as a guest of the Pacific Whale Foundation. Visit pacificwhale.com.au