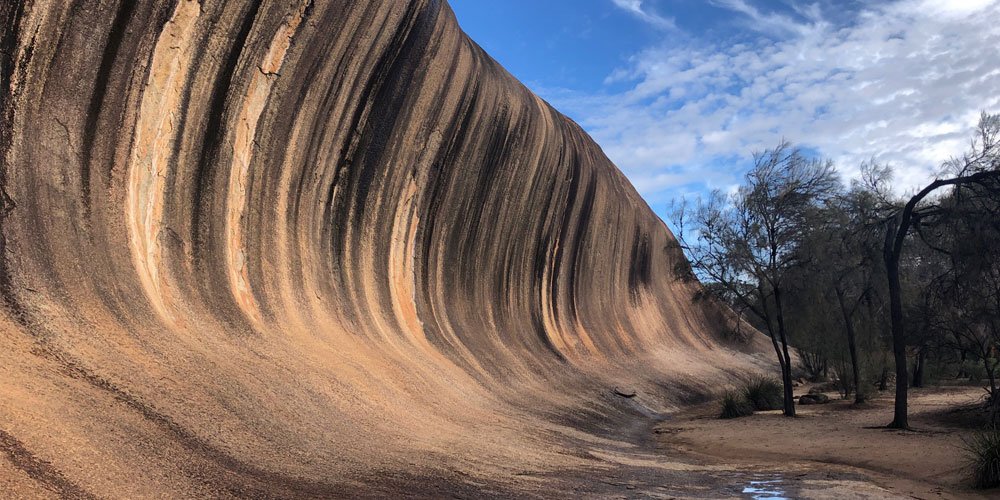 Wave Rock was popularised after a winning photo was regularly used on calendars.

Standing at the top of Mount Clarence overlooking King George Sound it’s easy to imagine the anxiety and awe of the people of Albany as ships filled their harbour and more than 20,000 men descended on their town in late 1914.

This pretty little port town in Western Australia was the gathering point for 37 troop transports from around Australia and New Zealand that would make their way in a convoy under escort across the Indian Ocean.

They sailed for Egypt on November 1, 1914, a journey that would ultimately end on the beaches of Gallipoli on April 25, 1915. For many, Albany would be their last view of Australian soil.

Today their story is told at the National Anzac Centre on a 260ha site which includes the Princess Royal Fortress, memorials, lookouts and nature trails close to the heart of Albany. Wide views of the coastline and harbour are at every turn.

Unlike many war museums, it is about the people rather than the events and the battles. Visitors are given a card with the name of one of 32 servicemen or women – Turks included – to follow their experience of the Great War, from recruitment to the battlefront and the difficulties on return, if they did return.

Of the 136,000 horses used by the Australian armed forces, only one, Sandy, made it home. It is such details and the interactive and multimedia displays telling individual stories that set it apart.

It’s a good idea to set aside a few hours at the site. Climb the Desert Mounted Corps commemorative staircase to Padre White Lookout, where it is claimed the first ever Anzac dawn service was held against the background of the harbour.

Albany was just one of the highlights of a whirlwind seven-day road trip covering almost 1500km in south-west Western Australia, which unearthed the quirky, history, and natural wonders.

As someone who was expecting miles of boring red roads, I couldn’t have been more wrong, with remote cemeteries and quaint little churches telling their stories along every route. 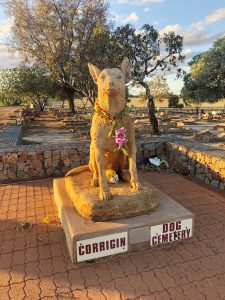 The statue was added in 1992, 18 years after the cemetery opened

The Corrigin Dog Cemetery in the wheatbelt is marked by a large statue of a dog sitting on the side of the Brookton Highway. Behind it, are rows of graves of more than 200 dogs, some marked with elaborate headstones and sculptures honouring man’s best friend.

Equally quirky is the 15km Tin Horse Highway linking the little farming community of Kulin with its bush racetrack. Scattered along the route are more than 70 tin horses put together by the locals – some impressive works of art and many others cobbled together by enthusiastic locals with a sense of humour.

Easily missed is a roadside shelter to see part of the rabbit proof fence, once the longest fence in the world. An information board tells its story.

At the same spot is the story of the Stacey Lamb Train which ran from 1942-73, delivering lambs to Fremantle for the UK market: “A massive 183,635 lambs were transported by the Stacey Lamb Train during its operation without a single loss of life – enough to provide 11 million meals to Europe.”

Apart from broad and remote landscapes, there’s the natural wonder of Wave Rock, near Hyden. Made famous by a photograph that won the 1963-64 Kodak International Colour Picture Competition in New York, it became a favourite on many Australian calendars.

Wave Rock has a pleasant walk up to the top and another through the bush across to the Hippo’s Yawn, another stunning rock formation.

Nature also delivers at the Natural Bridge outside of Albany, where a bridge has been created by the Great Southern Ocean smashing into granite. The coastline is equally dramatic a few metres away at The Gap where a suspended viewing point above the thundering waves is not for the faint-hearted or if you suffer vertigo.

Follow the coast west from Albany to the Valley of the Giants at Walpole where a 600m tree top walk ventures up through the canopy for a bird’s eye view of the magnificent tingle trees. Some of the giant eucalypts are more than 400 years old and this is the only place you’ll find them.

Margaret River is a handy base to see not just its famous wineries, but also to venture out to some of the west’s great man-made attractions.

Cape Leeuwin Lighthouse, where the Indian Ocean meets the Southern Ocean, and the 1.84km long Busselton Jetty, are both packed with historical interest.

And it wasn’t even wildflower season.

If you’re not a grey nomad, it’s still entirely possible and affordable to fly into Perth, hire a car, and follow your nose, staying at some of the many delightful cottages and cabins along the way.

Just be sure to allow more than a week. 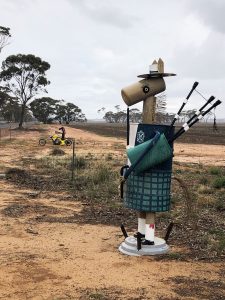 One of the characters of the Tin Horse Highway