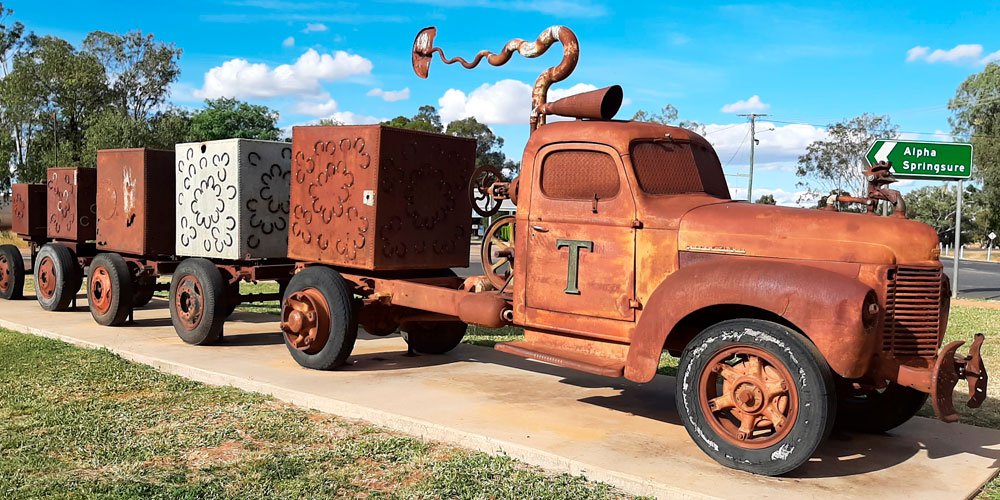 The Tambo Wool Truck artwork in the main street gives a nod to the region’s heritage.

Tambo is on the Barcoo Way which also includes Blackall, Yaraka and Windorah.

New settlers and selectors who moved to the Great Western Downs began camping in what would become the township from 1862.

It is recorded that in the early 1870s about 200,000 sheep and 50,000 cattle watered at the holes on the mighty Barcoo River near the town.  The first pub was built in 1863 as even then, travellers were keen to quench their thirst after a long, hard, dusty day on the road.

At first glance Tambo could seem to have little to offer the visitor, although the sign at its entrance proudly announces a variety of attractions in the oldest town in central west Queensland.

After obtaining brochures and mud map from the Info Centre we realised Tambo is full of history and tales of old.  Well-maintained heritage buildings have descriptive interpretive signage.

It’s the site of a deadly Qantas plane crash almost a century ago, has the now-famous Tambo Teddies workshop, a Grassland Art Gallery, Ben’s chicken races at the Royal Carrangarra Hotel and a heritage precinct.

It also has a friendly and welcoming atmosphere as you stroll the wide streets.

At last count Tambo had a population of under 400 in town. It has limited access to the facilities that are taken for granted in bigger towns and cities, but it does very well for a small population.

This slow-paced tidy town is awakened only by locals doing their day-to-day activities, the constant passing of travellers of all ages, and cattle road trains.

Temperatures in summer can exceed 35C and in winter drop below zero in the early morning.  We travelled in May and found the days comfortable and the nights mild.  The knee-high Mitchell grass had a recent drenching which replenished the pastures for winter.

Tambo has earnt its reputation as the Outback Teddy capital of Australia. During the past 25 years around 500,000 plus teddies have been sold and can be found in homes all over the world.  Each bear is individually named and outfitted giving each teddy its individual appeal. 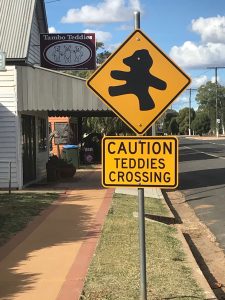 Around 5pm during tourist season (seven nights a week May-September) visitors head to the Royal Carrangarra Hotel to bid or just be a spectator of the crazy Chicken Races.

Publican Ben’s lovely hens need very little encouragement other than a mobile buggy filled with chook seed, which they chase to race several times around a track.

The owner of the winning chook takes half the proceeds with the other half going to the Royal Flying Doctors Service (RFDS).

The Qantas crash memorial site along the Coolabah Walk commemorates the spot where a biplane crashed on the claypan landing strip on March 24, 1927, while on a regular run from Charleville to Cloncurry.  The pilot and two others are buried in the Tambo cemetery.

Take a self-guided walk along the banks of the Barcoo and past the town’s historic buildings or try Morse code at the Post and Telegraph building.

Day trips are common to the Salvator Rosa national park or relax at the Tambo Dam where there’s an abundance of bird life – a comprehensive list of local birds is available at the Information Centre.

The Barcoo was not flowing but a series of billabongs were deep enough to hold Yellow Belly.  The dam was short on water, but surrounded by shady trees, irrigated green lawns and picnic tables with barbecues.

Among the annual events that draw visitors from all over, are the Tambo Stock Show in April, and the Tambo Races in August.  September sees the town overflowing for the rodeo.

A memorial has been erected at the site of the 1927 air crash.

When travelling it is always a good idea to check the calendar of Outback towns so you don’t miss anything.

There are currently a lot of travellers on the road as this is the best time of year to head west, so it’s likely you’ll need to book ahead for accommodation or a spot in the caravan park.

I recommend spending at least two nights to allow time for a full experience.  Like all small western Queensland towns, you may need to wait till after 10am when the paper and bread are delivered.  It’s not really an inconvenience, so stay a while and soak up its atmosphere.