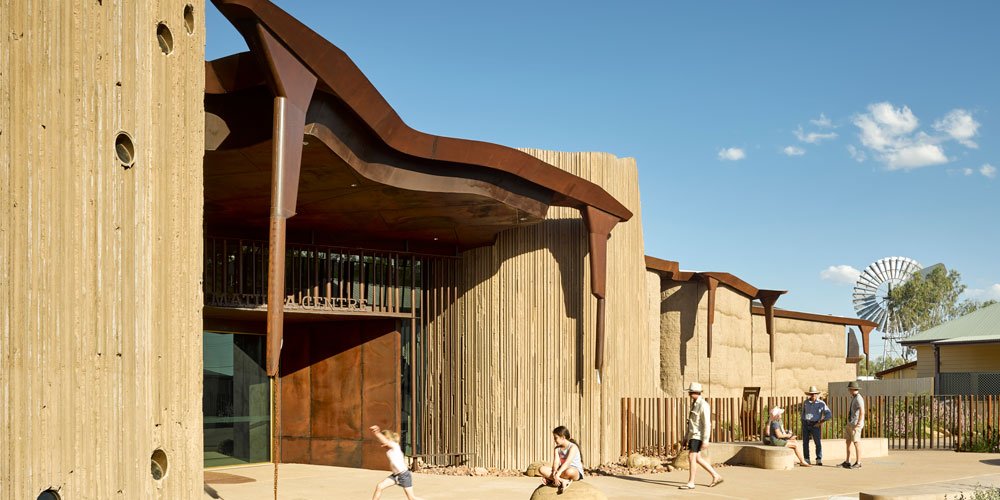 Striking contemporary architecture is not the first thing that springs to mind when planning a trip to the Queensland Outback, yet a series of tourist attractions has become an unlikely architectural trail that’s making a difference to the economic prosperity of Barcaldine, Longreach and Winton.

From a tiny museum that seems to rise from the earth to a whimsical, pink interior that nods to the Sydney Opera House, each project is worth a visit for the architecture alone.

Beyond aesthetics, however, good design is making a significant contribution to the region’s future.

Architect Michael Lavery is a director of m3architecture, a Brisbane-based practice that has built a strong relationship with Barcaldine, 12 hours north-west of Brisbane.

“‘The Barcaldine Regional Council has demonstrated courage and leadership by investing in design,” he says.

Working in collaboration with Brian Hooper Architect, m3architecture was first commissioned to work on Barcaldine’s Tree of Knowledge, the birthplace of the Australian Labor Party. At the same time, the council had purchased the Globe Hotel, a decrepit pub that was slated for demolition.

‘’While working on the Tree of Knowledge, we saw the potential to encourage passing tourists to spend more time in town,” Michael says. “The architects convinced the council to invest in a master plan and retain the Globe.”

After being saved from the wrecker’s ball it was reinterpreted as a contemporary visitor centre.

Barcaldine Council estimates there has been at least a 300 per cent increase in visitors stopping in the town since the Tree of Knowledge and The Globe were completed – a welcome boost for the drought-ravaged community.

The projects have received a string of local and national awards for urban design, architecture and heritage.

A lookout designed by m3architecture and Brian Hooper Architect is currently under construction alongside the Globe, offering a connection to surrounding landscape and birdlife, and the master plan includes a future performing arts centre and gallery.

The Australian Stockman’s Hall of Fame and Outback Heritage Centre in Longreach was affectionately dubbed the Opera House of the Outback when it opened in 1988, a reference to its distinctive curved form by Feiko Bouman Architect.

The museum, which pays homage to Australia’s bush pioneers, had been in slow decline. Exhibits and amenity no longer met contemporary standards, and with no master plan, 30-plus years of disjointed works had gradually made the entire operation dysfunctional.

The Globe Hotel in Barcaldine was saved from the wrecker’s ball and became a showpiece. Image: Christopher Frederick Jones

The transformative redesign has reinstated the museum as a top-ranking tourist destination. Respecting its original architecture, the design team rethought the museum from the inside out.

Information, ticketing, retail, food and entry to the attractions were united in a light-filled entry hub and connected to new external landscaping.

“We oversaw funding applications, commissioned and managed curatorial and exhibition services and filmmakers, and worked with the client and the team to diversify the European, male-dominated, narrative of ‘The Stockman’,” Michael says.

Cheeky references to the Opera House and new, technology-rich exhibits have captivated audiences and the museum can now look to a self-funded future.

Visitors can explore the aircraft up close from viewing platforms.

The aircraft and soaring roof provide the canvas for “Luminescent Longreach”, a state-of-the-art light show designed by Buchan that explores aviation history.

The immersive light and sound experience extends museum visits into the evening and encourages visitors to stay in Longreach overnight.

Last stop Winton, population 945. An hour from Longreach, Winton is a speck on the map of Australia’s vast interior, yet within its boundaries sit two awarded architectural works by national practice COX, which together have helped stabilise the town’s fragile economy.

The relationship began in 2012 with the Australian Age of Dinosaurs Museum, a tiny jewel located 24km south-east of the town and completed pro-bono over several years.

Sitting atop a remote mesa, the museum provides visitors with an insight into one of the world’s most significant and cohesive dinosaur fossil collections, which local farmer-turned-palaeontologist John Elliot stumbled upon in 1999. 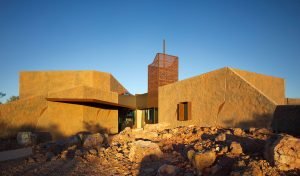 Receiving the State’s top award for public architecture in 2013, it is now one of Winton’s largest employers during the winter months.

Visitation has increased by an average of 18 per cent a year since opening and with new stages of the Dinosaur Museum currently under construction, the benefits to the local economy will continue to grow.

Back in town, COX was engaged to re-design the Waltzing Matilda Centre, which burnt to the ground in 2015. The only museum in the world dedicated to a song, it houses an extensive collection of historical artefacts, memorabilia and collateral related to Banjo Paterson’s iconic 1895 ballad.

Multiple national awards for architecture and interiors are testament to the museum’s design merit.

There is one other regional treasure for the intrepid design tourist. A side trip to Muttaburra – officially Queensland’s geographic centre – reveals Brian Hooper’s Muttaburrasaurus Interpretation Centre, a sculptural insertion into the landscape that tells the story of a dinosaur fossil found near Muttaburra in 1963.

For Queensland’s Central West, investment in quality design has delivered on the adage that the whole is greater than the sum of its parts.

With strategically planned and beautifully executed design across four connected towns, the reward for visitors and locals alike is exponential.

Tourists on the long journey west are treated to a series of rich, engaging experiences that amplify history and culture and leave a lasting impression – 50 per cent of visitors to the Outback return a second time.

“Prior to the Barcaldine master plan strategies and the Tree of Knowledge project being completed, no pubs hired external cooks or chefs for meals. No pub had an international backpacker as a bartender, and none of the businesses in town had done work on their commercial facades for some years,” Michael says.

“Providing even the smallest of communities with the highest quality design bestows respect on people and their stories, and on the places they call home.” 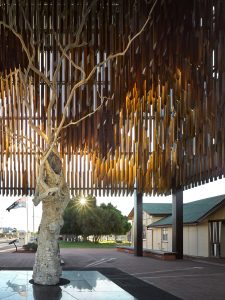