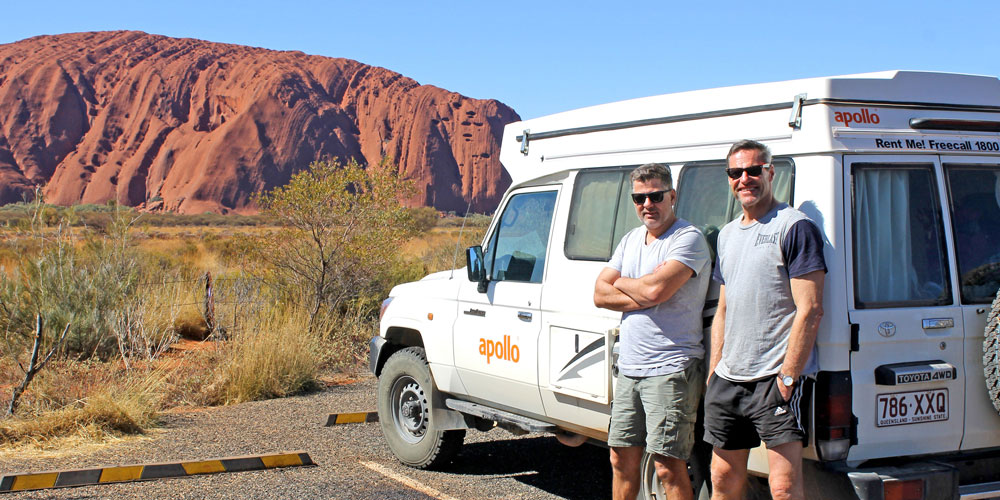 And this would be an escape for the boys. After flying to Adelaide, my mate Glenn Diggle (pictured left) and I began our desert safari with a luxury stay at the Adina Apartment Hotel Adelaide Treasury, which occupies one of the oldest and most historically significant buildings in the city. Completed in 1876, this stately colonial building was the hub of South Australian politics.

After a night living it up, we picked up our home for the week, an Apollo Motorhome Trailfinder camper.

We headed north from Adelaide, taking our Apollo mission into the great, empty interior of Australia.

Just over five hours north of Adelaide, the giant peaks of the Flinders Ranges rear their rugged heads.

We were here to fulfil a life-long goal to climb the jagged peaks. After a hearty meal, refreshing ale and overnight camp at Wilpena Pound Resort, we set off on the steep, six-hour return trek.

It challenged our lungs and legs but rewarded us with jaw-dropping vistas over the rocky ranges and beyond to the seemingly endless desert plains, soul-stirring expanses of raw, wild beauty.

After some banter over a beer with the locals at the Marree Pub, we turned towards one of Australia’s landmark dirt highways – the Oodnadatta Track.

A warm bore-water soak in Coward Springs and the edge of Lake Eyre – Australia’s largest lake and lowest point at 15m below sea level – broke the journey briefly, and sometimes we stopped just to walk in silence into the Never Never, to feel the primal power and overwhelming stillness of the desert.

The next overnight stop was the remote hamlet of William Creek, South Australia’s smallest town with a permanent population of just one. Trevor Wright is owner of a quirky pub, which is pretty much the only building in “town”.

He also owns Wrightsair, a fleet of light planes for scenic flights over Lake Eyre and the little-known Painted Hills which stretch across Anna Creek Station, the largest cattle station in the world. No roads reach the Painted Hills, so flying low over these remarkable, ochre-topped, sandstone formations was enthralling.

The mining town of Cooper Pedy was next on the horizon before returning to bitumen and the Stuart Highway heading into the physical and spiritual heart of Australia, Uluru.

Coming face to face with the 348m monolith, plonked improbably in the middle of the desert, is a powerful and moving experience. We circled the base of the rock by bike along a fun and easy 11km circuit that reveals secret canyons, caves, waterholes, multi-coloured textures and colourful ancestral stories.

An even better view of Uluru was revealed on a brief but thrilling flight with Ayers Rock Helicopters – a must-do experience that will become more popular now that the climb is closed.

We toasted the last night of our desert journey at Sounds of Silence, a spectacular, outdoor dining experience that began with chilled sparkling wine and canapes atop a sand dune as we watched the sun set on Uluru.

This was followed by fine cuisine enlivened by indigenous flavours and an astronomical scan of the night skies.

Next morning, as we headed into Alice Springs to drop off the Trailfinder and fly home, we vowed to feel the freedom of the open road again soon.