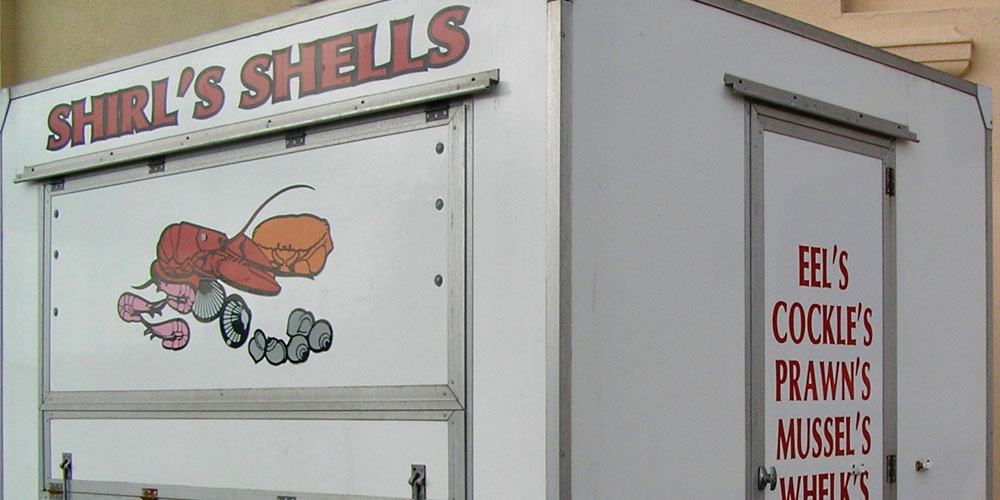 Shirl has the shells but who knows what her shellfish possess.

One of the best of our English grammarians was Eric Partridge. Among his many books on grammar, his English Usage and Abusage: a guide to good English, (Hamish Hamilton, 1947) contains a lot about correct punctuation.

He points out that the English language didn’t employ punctuation until after printing was invented. Typesetters and publishers needed a way to signal how the sentences should be read or spoken. Punctuation was a way to separate the words and clarify their meaning.

I also have a wonderful book by Lynne Truss called Eats Shoots and Leaves. This is known as the Panda Joke. The Panda version follows the verb Eats with two objects that the panda eats.

Insert a comma and it becomes three verbs – Eats, Shoots and Leaves, which may describe a visiting gentleman who dines, hunts and departs.

Her entertaining book analyses the greengrocer’s apostrophe, the one that urges you to buy banana’s and avo’s. Even supermarket advertisers spruik this week’s special’s. And ads for retirement villages tell us that they are for the over 55’s.

We may be among the over 55s, but we can still spell.

But I digress. Before Gutenberg, manuscripts were handwritten on parchment or vellum and were not punctuated. Words, not marks, were needed. Stories were passed to each new generation by the spoken word.

The advent of printing in the 15th century brought a barrage of prose and dilemmas about where to put pauses, and how to indicate questions or separate clauses for readers.

Laying out brass letters on wooden frames before going to press, meant some new brass indicators were needed.

And so, the ongoing predicament of punctuation was born. As Truss points out, you read as you speak, so you need some indicators showing when to pause, to take a breath or to change your voice.

“What are you doing?”  is an enquiry, so a squiggly curve says question.

“What are you doing!” indicates annoyance, so requires an exclamation mark.  Same words, different inflection.

Punctuation becomes a road-map for communication. You speak and I respond, but my response is influenced by your verbal or written punctuation.

Many of today’s television presenters need to know that – take a breath at the end of the sentence, get rid of the autocue and think!

At school, we were taught that a comma separates a subordinate clause from the main clause. Not many today even know what a clause is, much less a subordinate clause, a dependent clause or a conditional clause. When you use the word ‘if’, the verb has to be in the subjunctive mood: “if I were to leave you now …”

Do we use a comma or a semi-colon? Answer: a comma is used in lists, between phrases and between some clauses. A semi-colon is used only between self-contained clauses following the main subject.

The single inverted comma also denotes missing letters or numbers, so we don’t write: the possessive 50’s, but the plural ‘50s (for 1950s) or 55s for the demographic.

Let’s go back to Grade 5 and teach box analysis. At least we learned about punctuation, grammar and sentence construction, something that is disappearing into cyberspace, that black hole that is consuming the printed word.