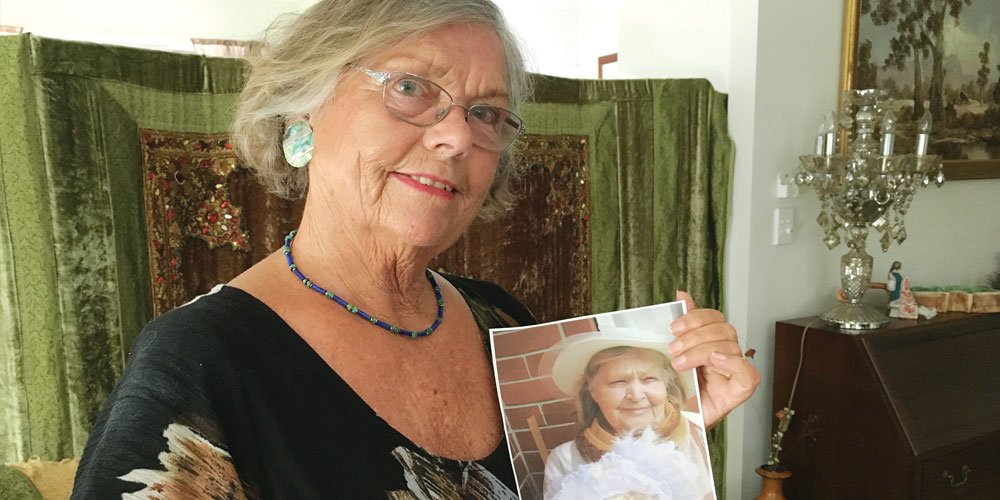 Danijela Hlis with a photograph of her mother whose care she managed for eight years.

For her 70th birthday last year Danijela Hlis treated herself to a holiday in New Zealand.

She booked a four-wheel-drive tour and along the way found herself sitting on a secluded beach next to some friendly seals, a cup of tea in one hand.

In her words, she was “in heaven”.

For a seasoned world traveller, master of many languages and a talented woman who was once at the cutting edge of industrial relations in Australia, this was the inner calmness she had learned from caring for a parent with dementia for more than a decade.

“Compassion, inclusion, respect and human rights, these are the things we need more of,” she says. “Younger people are more self-centred. I was too when I was younger. I’d like them to go back to school and forget about advanced mathematics and learn compassion.”

Born in August 1949, in Slovenia, then Yugoslavia, Danijela (pronounced Dan-yela) left home at 18 to study linguistics in London, Paris, Geneva, Rome and Barcelona.

She became fluent in French, English and Italian … but says she still struggles with Spanish and Croatian. Interpreting fostered a love of travel and her first diplomatic posting was to Rome. After a stint in the Sierra Leone embassy she came to Australia on a two-year contract for Transfield, which employed many migrants.

It was the mid-1970s, and she ended up in Sydney translating for SBS television.

Missing Europe, she returned to Paris when her two years were up.

She married a Frenchman, Claude, and they returned to Australia as her visa was still open.

Danijela completed a diploma in human resource management and industrial relations and worked all over Australia settling disputes and negotiating with unions.

“I was able to speak the workers’ languages,” she says. “I attended Industrial Relations Commission hearings and worked with the unions on new awards and retrenchment policies.”

Along the way she met her second husband, a German, and they moved to Tasmania where they created a tourism resort overlooking the ocean which they called Bicheno Hideaway.

“It’s still there. I go there on holidays,” she says.

She became aware of volunteering in Australia when she saw a Red Cross advertisement seeking helpers to befriend lonely folk in residential care.

“That’s when I met Betty, abandoned by family, not talking or eating and very depressed, and we became friends. She was a teacher for me,” she says.

“I had never paid much attention to illness until I met her. Without meeting her, I would have been too terrified to do what followed.”

What followed was her parents coming to Australia and into her care.

They were in their early 70s. Her father was an invalid but mentally fine while her mother, Marija, was showing early signs of dementia.

“I couldn’t put them in a nursing home, so I gave up everything else – my business, career and marriage, and became a fulltime carer,” Danijela says.  “I changed my studies to aged care.”

When her father died, Danijela and her 74-year-old mother moved to Hobart where Danijela cared for her until she died at age 82.

“It was a long life with her and dementia, but it was important to learn about her condition. She was lovely, a princess,” she says.

So much so that Danijela often entertained her mother’s fantasies and dressed her as a princess with rings, crowns and tiaras. Her mum loved it.

Danijela’s siblings had followed her to Australia, but the burden of caring was left to Danijela.

“It took a while to realise that not all of us are cut out to be carers. Maybe because I was never a mother my maternal instinct came out and I found it,” Danijela says.

It was while caring for her mother that Daniela joined Dementia Australia and other organisations and began delving into dementia research.

She became a voluntary bilingual support worker, which was an enormous help to sufferers from different cultural backgrounds who tended to revert to their mother tongue.

In the course of her hectic life, Danijela has also been inspired to write three books.

Her first, Whisper backed by an Australian arts grant, looked at migration and assimilation.

Her second, Hideaway Serenade embraced nature and understanding human need for the environment and the third, Forget-Me-Nots deals with aged and dementia care through short stories and poems.

Today, Danijela is a Dementia Australia advocate. She lives in a retirement village and helps dementia sufferers through Dementia Alliance.

She regards her life as blessed – she beat breast cancer three years ago – and is happy she can use her ability and knowledge to make the lives of dementia sufferers and their carers a little bit easier.

“Dementia is just another illness. We don’t have a cure but the more we participate in research the more hope there is of finding a cure,” Danijela says.

Danijela invites all readers to become Dementia Friends, a movement started in Japan many years ago, so Australia can continue developing dementia friendly communities. In 2019 there were more than 20,000 friends in Australia. There were an estimated 447,115 Australians living with dementia as of 2019 and almost 1.5 million involved in the care of someone with dementia.

Printers make their point
The tale of a natural storyteller