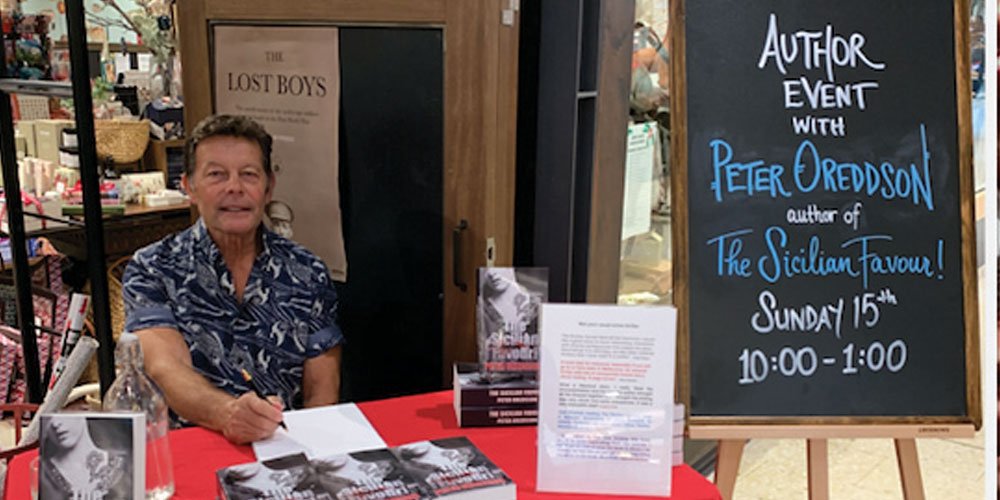 Peter at a local bookstore (which missed his name spelling) promoting his latest book.

It’s not exactly the traditional formula for writing success but then retiree Peter Oredsson, 68, is anything but traditional.

Relaxing in a comfy chair with his pug Mabel on his knee, Peter seems surprised that his unusual start in life could have led to a career as an author with his latest book, The Sicilian Favour!, steadily garnering fans.

So much so that he is already working on a sequel.

While it might seem at odds with his background in sales and marketing, it has turned out to be a good fit, with the entrepreneurial Peter having the experience to not only write but also to organise the Australian publishing, distribution and marketing of his books.

Born and raised in Hassleholm, Sweden, he was an early school dropout in Year 9 with marks well below average, leading him to take on hard labour in different factories and to leave home at just 16 to find his own way in the world.

He soon discovered he had a talent for marketing, and in 1974, arrived in Australia with a two-year contract sponsored by the federal government.

Peter persuaded a multi-national company to employ him as a technical sales rep and with his interest in education renewed, he spent seven years at night school, eventually graduating  with a degree in business, majoring in marketing.

“All of my grownup life I’ve had a natural know-how for persuading people to buy things,” he said.

Living in a hostel in Nunawading, Victoria, he met his British-born wife and after three years, persuaded her and her son to return with him to Sweden, where they had a daughter together.

But the lure of Australia remained strong and being a natural entrepreneur, Peter was keen to start his own businesses.

“In Sweden you are very restricted whereas here you can set up a proprietary limited for $1800,” he said.

After mixing with business chiefs from around the world as a marketing manager, global sales manager and managing director, he began work as a marketing consultant through his own company, taking on everything from call centres to wholesale confectionary and even handyman work.

The writing happened, purely by chance, 10 years ago.

“I was very naughty as a child – nothing illegal, but always getting up to mischief.”

A natural story teller from way back when even his siblings wanted to hear “Peter stories” for Sunday entertainment, he found that his grandson – then in his early teens – was also keen to hear about his antics.

“He loved to read, all the Harry Potter stories and such, so I decided to write them down for him,” Peter says.

And that’s how his first self-published book Peeta Oreda came about.

“He said, ‘Granddad I love it, it’s so good’,” and so Peter, who himself loved fantasy and the mystery of numbers as a child, wrote a second book which he also self-published called The Power of Numbers.

As an unknown author, getting a book accepted by a major publisher is a hard-fought battle so when Peter wrote his third book, Bloodline Incursion, a powerful dramatic read based on a true story, he also published that himself and set about selling copies.

It was well received and then, after four years of disciplined writing, he produced The Sicilian Favour! which was taken up by international publishers Austin Macauley.

A work of pure crime fiction and drama, its complex and compelling plot has drawn widespread favourable reviews and it has an ending so unpredictable that even an ex-detective mate who lives in the same retirement village as Peter could not guess the outcome.

Ever the entrepreneur, Peter realised that by doing a parallel import of his books and publishing them in Australia he could promote them better himself with local store book signings and get a better return per copy.

He says it’s hard to estimate just how many copies have been sold, with libraries stocking them, digital copies being downloaded and people sharing, but it has been doing very well.

He’s already well into writing the sequel, which should be finished by the end of this year.

A completely self-taught writer, Peter said he tried to model himself on his favourite author and fellow Swede Stieg Larsson, author of  the blockbuster The Girl With The Dragon Tattoo series.

Like Larsson, his dream is to have his books made into movies. Sadly Larsson died before his dream was realised – but Peter is hoping such major success will come long before that.