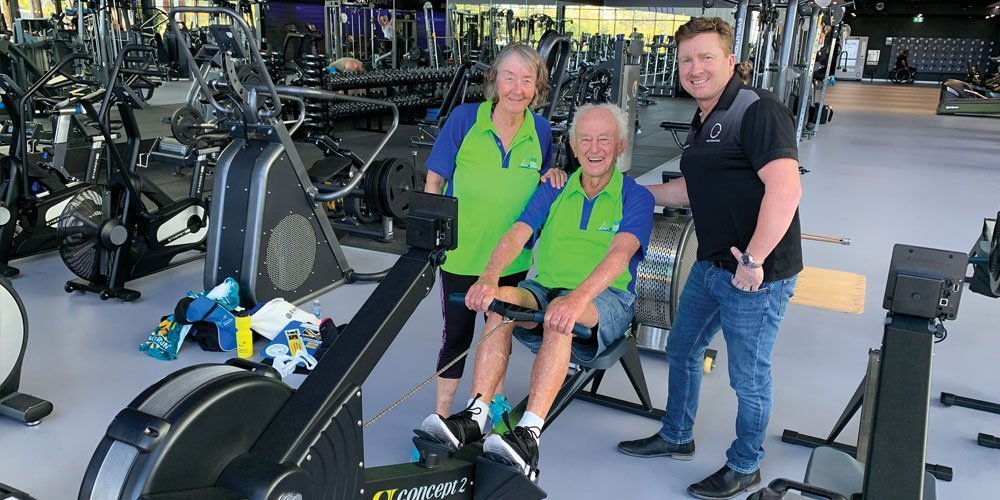 China Johnson was already a champion in Masters swimming, when someone suggested he test himself without getting wet. His response was: “Why not?”

Just three months ago, he tried his hand at indoor rowing – and picked up three Australian records and a world record in what seemed like the blink of an eye.

Not bad for a bloke who will celebrate his 92nd birthday in December.

And then there’s Vince Home, who at 94, blitzes it despite being visually and hearing impaired.

China Johnson is the kind of man who looks at life in all its possibilities – no matter what it throws at him.

Born Neville Johnson, he gained his nickname when he danced with Chinese girl at a dance at the age of 16. It stuck and that’s all his family and friends have ever called him.

Raised during the Depression, China did his apprenticeship as a steelworker in Port Kembla, and is a Korean war veteran, businessman, farmer and family man, but has been active in various sports his whole life.

“I wanted to play footy, but we couldn’t afford the boots, so I took up swimming,” he said. “For 10 cents you could join the local surf club for 12 weeks, so I joined. I spent 15 years in the surf movement in New South Wales and enjoyed it.

“Then I gave it away for 30 or 40 years … there was family and I had an electrical contracting business. Around the time of the Beijing Olympics I saw a clipping that said that anyone who was capable could join the Masters Games in Australia and I thought ‘wouldn’t that be terrific?’

“I got into swimming training and I won gold and two silver medals, and I just kept going.”

China joined the Cotton Tree Masters Swimming Club after moving from acreage in Maryborough to Cotton Tree a year ago to help rehabilitate his daughter Cindy after she suffered a stroke.

Then came the rowing suggestion and China, who had never even sat on a rowing machine before, took to it, well, like a duck to water.

Then he broke the world record for a four-minute row at the elite new 02 Performance Gym at the Sports Hub at Lake Kawana last month, rowing 828m to smash the old 600m record held by an athlete from the USA.

“I haven’t done it since,” China chuckles. “When I got off, I nearly collapsed. It was the most fatigued I’ve ever been.”

Always modest, the wiry and super-fit China reckons it’s his weight that helps claim the records – weighing in at just under 75kg to scrape into that category.

Bubbling with optimism, China’s favourite saying is “it has been a great life”, so much so, that he has self-published three books about his life with just those words as a title “for the grandkids”. A fourth book is in the works.

“It has been a great life,” he said. “I’ve been in everything. I think life is marvellous. I can’t understand these kids who get hooked on drugs and stuff, there’s so much in life for kids.”

Along with China, there’s Roberta Gordon, 72, from the Coast, Anne Cresswell, 81, from Victoria, a regular Coast visitor, and Vince Home of Alexandra Hills in Redland City.

She said Vince had been rowing for seven years.

“He used to walk four kilometres a day but when he started going blind, he couldn’t walk so we thought he could try indoor rowing for exercise and that’s how it started. It just happened,” said Beryl.

“We both do it for exercise. It’s good because it uses 82 per cent of the muscles in your body with no impact and you do it to your own satisfaction, as hard as you like.”

Beryl said she and Vince had always been sporty and in fact met playing tennis at Tara, near Dalby. They will celebrate their 70th wedding anniversary in January.

With four children, 10 grandchildren and seven great-grandchildren, Beryl says they have passed on their love of being active to the rest of their family.

As the oldest member of the Ancient Mariners virtual rowing club, which operates world-wide, Vince tries to row 15,000m every morning on his Concept II rowing machine, doing as many kilometres as he can every month.

He currently ranks 83rd of 4500 members around the globe – not bad as he’s the only nonagenarian.

Beryl is also an accomplished artist and a member of the Coochie Art Group which holds regular exhibitions.

Sunshine Coast Indoor Rowing Club president, Wendy Coghill, said China and Vince were both incredible athletes for their age and a true inspiration.

She’s thankful to the owner and manager of the 02 Performance Gym, Miguel Rojano, for inviting China to attempt his records and helping to supervise his rows.

“As the Sunshine Coast Indoor Rowing Club is really the only indoor rowing club in Australia, we have quite a number of interstate and intrastate members,” Wendy said.

“The other indoor rowing groups are part of gyms or rowing on water clubs.”

Coach Rob Cossalter is very experienced and has a wealth of knowledge.

This would explain why members are happy to drive from the Gold Coast and Brisbane to attend training days at the Alex Surf Club. 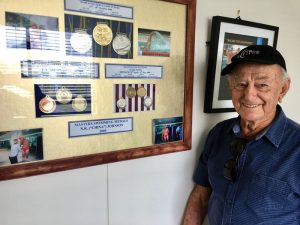 China Johnson has racked up an impressive collection of awards in his 91 years.

John presses on with weighty ambitions
Printers make their point