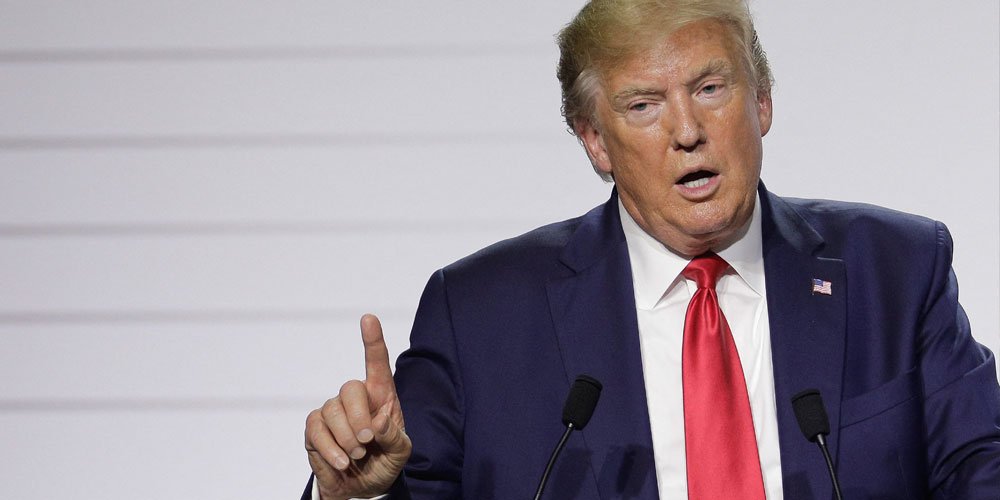 Trump loves to use phrases such as “as of now”. Image: AAP

Is it because we cannot think of the next word?

Australian politicians love to use the phrase “at this point in time”. Well, that simply means “now”, as does “at this moment”.

Trump loves to use phrases such as “as of now” and even “as of yet”. Both also say nothing beyond the simple “now”.

Some critics have accused me of being pedantic. Maybe I am, because I was brought up by an English master who was pedantic, insisting that we use correct language not only in class, but also in written essays.

“Boy, you have split your infinitive twice on page two.”

A respected journalist writing about Boris Johnson quoted him as saying “there’s the dark arts”. He went on to write: “he has also been forced to embarrassingly and repeatedly talk about his cocaine use …”. Whatever that means.

This failure to make nouns and verbs agree is another modern abomination. Singular subject must take a singular verb.

And then there are the challenges of “less” and “fewer”.  Less is only of quantity – less milk, less petrol. For numbers, it has to be fewer.

You can’t have less people, less cars on the road or less things to do.

The English language today is being mongrelised, pretty much. And there’s another one. What does “pretty much” mean?

There is nothing pretty about mongrelising the language.

In a recent interview about the ABC, our Ita said that “It’s early days”. Sorry, these are early days.

How to cope with Modern Gobbledygook is a book review from the English International Express, by James Moore. It covers everything from algorithm to zip file. You know what those mean? Me neither.

The book is called The Older Person’s Guide to New Stuff, by Mark Leigh (published by Robinson, 2019).

It contains 325 new words in the English language, from android to vaping. And if you don’t know the difference between your Bluetooth and your Blu-ray, you must be over 30.

Now, before someone gets out their angry-pen to criticise me as a GOM (Grumpy Old Man), let me confess.

More than 100 years ago, a new word was introduced to the language: “tele-phone”.

An amalgam of two Greek words meaning “far” and “sound”, nobody knew what it meant.

There are two more words that I present for your enlightenment –”mindfulness” and “wellness”.

Neither is true English, and both have been hijacked by the alternative health industry.

The first means introspection. The practitioner clears his or her mind of external pressures and reflects only upon internal thoughts. We once called it relaxation.

The second means wellbeing or simply good health.  So why don’t we say so? Wellness is an “un-word”.

The health industry really must try to avoid confusing their patients.