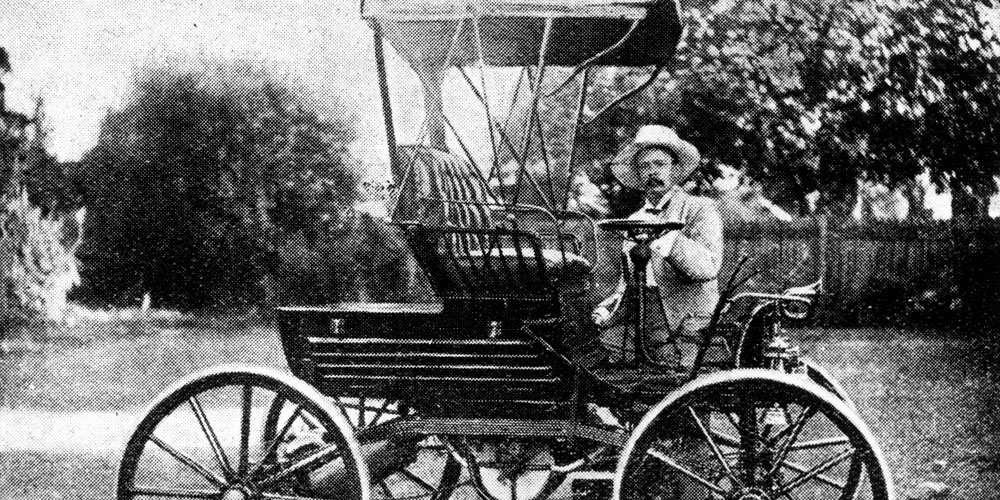 The stories of local heroes and villains, lovers and trailblazers, all start in a cemetery. Head west or north on a day trip that covers a lifetime. These are the stories that have not been laid to rest.

Travel west on the Ipswich Motorway to the Ipswich General Cemetery, the second oldest in Queensland, where stories of the region’s past abound.

Here’s one, and you can find the evidence easily.

We all know the Kelly name, and the legend that Dan Kelly, brother of Ned, died in the 1880 Glenrowan shoot-out with police. So, who was the man who told a Brisbane newspaper in August 1933, he was Dan Kelly?

No one at the time could prove he wasn’t Dan, and now he’s buried under the name James Ryan in this old graveyard.

There is also a memorial to Dan Kelly on the same site. It carries the words “Tell ’em I died Brave… in Ipswich.”

Also at the Ipswich Cemetery, is the grave of two little girls, Kate and Jane Broderick, who drowned after being attracted by waterlilies in a pond at nearby Walloon.

The tragedy inspired Henry Lawson to write his classic 1891 poem, The Babies of Walloon.

As there are so many poems, paintings and songs about missing youngsters, the story asks the question, is Australia the land of lost children?

You can also visit the beautiful bronze statue of the girls at the Henry Lawson Bicentennial Park in Walloon, less than 20km away. 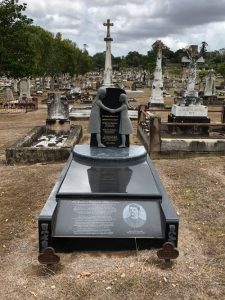 Babies of Walloon at Ipswich Cemetery. 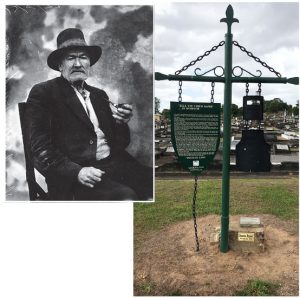 Dan Kelly in 1933 and the memorial at Ipswich Cemetery.

Now it’s back in the car and off to Gatton – a 45-minute drive on the Warrego Highway (A2). Here you will find the impressive grave of the victims of the Boxing Day 1898 murders,  Queensland’s oldest cold case.

The three Murphy siblings from Gatton were murdered and mutilated on New Year’s night and their bodies left for all to see. Failure to secure the crime scene and public destruction of any clues which followed, almost guaranteed the killer would never be found.

The impressive headstone to the siblings was erected by public subscription.

Drive 36-minutes up the Warrego Highway to the heritage-listed Drayton and Toowoomba Cemetery to find the graves of the Trevethan Brothers – Walter and Thomas.

During 1901-02 the brothers built the first car in Queensland to their own design. It was powered by a six-horsepower engine, was a brute to start and had a clutch that had to be worked sideways across the car.

Residents said it was only good for frightening the horses and scaring the children – but the locally built vehicles and the brothers who created them put the town on the automobile map of Australia. They rest in separate graves not far from each other.

And there are also the medical history makers, Emma Webb and nurse Helen Tolmie. It’s not widely known, but in a surgical breakthrough, Emma’s life was saved by the first appendectomy to be performed in Australia. The operation was carried out on the kitchen table behind a bakery with Nurse Tolmie in attendance.

Emma lived a long life and Nurse Tolmie a prestigious career. Both now rest in the  same cemetery. 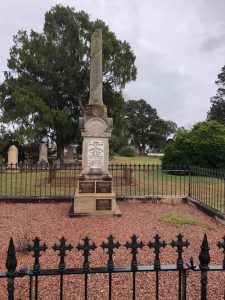 A well-known name in Nobby

While in the area, take a trip to the little town of Nobby. It’s well worth the effort if the name Sister Elizabeth Kenny rings a bell. She was a remarkable woman whose radical polio treatments were banned by doctors. But results showed they worked, and they saved many children from a life of disability (including actor Alan Alda, revered for his role as Hawkeye in MASH). Despite having no formal qualifications, Sister Kenny was hailed worldwide for her breakthrough treatments. She is buried in a humble grave in the little Nobby cemetery.

While there, take a look around. It doesn’t take long. You will also see the memorial to a young man called Victor Denton who died after being hit by a sniper’s bullet in Monash Gully, Gallipoli in 1915.  And one final tip for Tombstone Tourists, if it has been raining in Nobby it can be very muddy in the cemetery so be prepared!

Weather this drive for the weatherman

Take the Steve Irwin Way off the Bruce Highway to make your way to Peachester Cemetery – a peaceful little place. Just inside the front gate on the left is the grave of Inigo Jones, a man for all seasons. Jones was a pioneer of the art of long-range weather forecasting. He predicted when one of the nation’s worst-ever droughts would break – and it did. He became a household name around the nation with many Australians, particularly farmers, living by his weather tips.

It’s about an hour’s drive from Peachester Cemetery to Tewantin Cemetery where you will find the grave of a man with a most remarkable World War I story. Henry Buchanan was serving as a stretcher-bearer in the battlefields of France. Unarmed and looking for wounded Diggers in the trenches, he captured 18 armed German soldiers using just his water bottle. He survived being shot four times and returned home a hero.

Further north, Gympie Cemetery holds two men with very different stories. One was a mine manager who knew every inch of the North Phoenix Mine on the Gympie goldfield yet mysteriously, without explanation, and astonishingly to those who knew him, fell to his death down one of its shafts.

The other played a major role in the financial survival of the state of Queensland when it was in deep strife. James Nash discovered gold at Gympie in 1867 and saved the treasury. They named the place after him – Nashville. It was later changed to Gympie, for the Aboriginal gimpi-gimpi, a stinging tree growing in the area.

And this is just the beginning. For the full story plus plenty more, as well as directions, take a copy of Grave Tales with you.