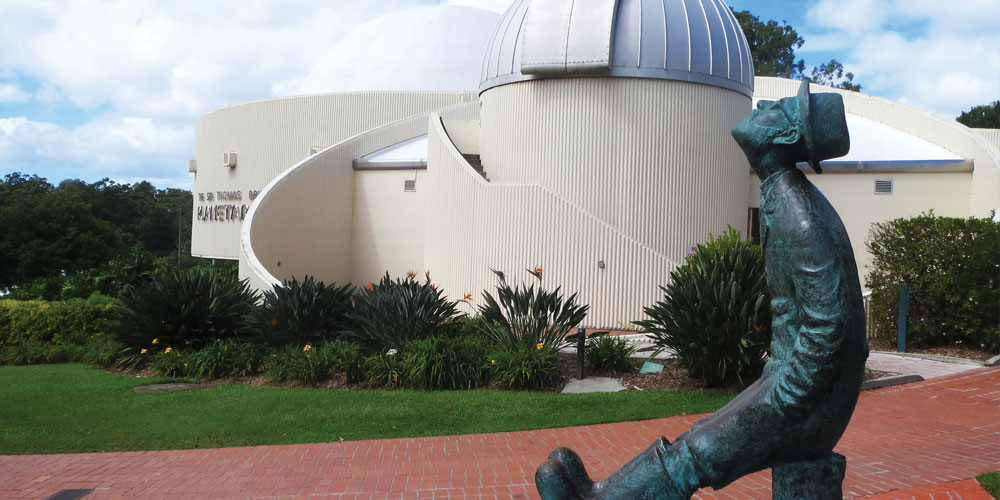 There’s a quirky little statue outside the Brisbane Planetarium that has both a Russian and a Scottish connection.

It’s of Konstantin Tsiolkovsky (1857-1935), a Russian scientist and founder of cosmonautics.

The Scottish connection is that Sir Thomas Makdougall Brisbane (1773-1860), who gives his name to both the city and the planetarium, was also looking to the skies. He was an astronomer from Largs, not far from Glasgow on the west coast of Scotland.

The statue, by Sergei Bychkov, was donated to Queensland during Russia Week in Australia in 2007, the 150th anniversary of the birth of Tsiolkovsky.

As it suggests, the Russian provincial teacher and scientist was ever looking upwards to the universe and a future not even he could have imagined.

The bronze statue (which like all good bronze statues everywhere bears the polish of being rubbed for good luck) has the bespectacled scientist wearing his big winter boots and trench coat, and his hands plunged deep in his pockets.

He is at odds with his tropical location at the Mount Coot-tha Botanic Gardens, a setting wildly different to his home of Kaluga in frigid Russia.

John Bonsor, in his book The Observatory in Brisbane Glen says: “Sir Thomas Brisbane has been called the Johnny Appleseed of astronomy because wherever he resided, he planted an observatory, the scientific fruits of which were much appreciated by his contemporaries.” Brisbane served as governor of the colony of New South Wales 1821-25 and while he was there, established an observatory at Parramatta for mapping the southern skies.

A trip can become a whole day’s adventure to the base of Mount Coot-tha at Toowong, about 5km from the CBD.

After wandering the spectacular botanic gardens, enter the planetarium where there are extensive space exploration and astronomy displays, a gallery with a replica of Neil Armstrong’s space suit from the 1969 moon landing and a mini theatre featuring a regularly updated Space Telescope Science Institute web feed. At this point, there’s a day’s entertainment without even putting your hand in your pocket.

And of course, Tsiolkovsky is sitting in the garden for a photo op or waiting to have his knee rubbed for good luck. 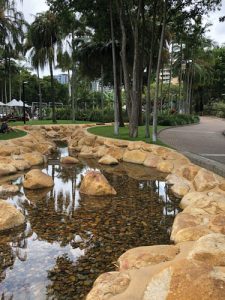 Take the grandkids on a holiday adventure

Looking after grandkids over the summer holidays? Or are you just feeling young at heart?

From fun and games in Brisbane’s premier parks, to nurturing curious little minds at museums and environmental centres, there’s plenty to see and do in Brisbane to keep youngsters entertained.

Here are some recommendations for grandchild-friendly adventures.

It’s a splash: Council has 22 pools across Brisbane, 16 of them with aqua parks and water play areas. Slides, mushroom foundations, water jets, bubblers and drop buckets can keep the kids entertained for hours. Many venues also have kiosks and barbecues, so board a bus for a picnic.

A visit to South Bank is essential, with or without the grandkids. Have a swim at Streets Beach or let the kids splash in the Aquativity water play park. It’s a great way to cool off on a hot summer’s day. The kids will love Riverside Green Playground, with a boat, bridges, tunnels and slides. Head to the Picnic Island Playground, which, as the name suggests, is a great spot for a barbecue or picnic.

Every Thursday, 9am-1pm,  there are free activities for children under five, while older kids will appreciate the Queensland Musuem, especially the larger-than-life dinosaur exhibition, Lost Creatures. Entry is free.

Magnificent Mt Coot-tha: Catch the bus for a day exploring the Brisbane Botanic Gardens. Wander through the exotic rainforest and see if you and the grandkids can find all the hidden surprises along the Hide ‘n’ Seek Children’s Trail. The trail map can be downloaded from council’s website or picked up from the Visitor Information Centre. The gardens are also home to the Sir Thomas Brisbane Planetarium, and with a range of entertaining and informative shows.

You might come home with a budding Stephen Hawking.

Eco entertainment and wild adventures: Brisbane has two environment centres accessible via public transport, both surrounded by unique natural areas. Located just near a bus stop on Rode Road, Downfall Creek will keep the kids entertained with a session of nature-based play at Bush Kindy, or meet some new wildlife friends. If you’re up for a 15-minute walk from the nearest bus stop, Karawatha Forest Discovery Centre is home to Queensland’s first nature play space, which has water play, climbing features and discovery trails.

Riverside at New Farm Park: Sometimes the simplest things are fun. Glide up and down the river on a CityCat, especially fun on the new double-decker.  Stop off at New Farm terminal for a play in New Farm Park. Catering for all ages and abilities, this 37ha park has a fort-like treehouse, a bridge winding through ancient fig trees, rope climbing frame, dragon-themed area, music stations and plenty of open grassy lawns.

Nearby, the New Farm Park River Hub is starting point for a number of activities during the holidays. Join a free or low-cost activity or bring your own equipment and fish or kayak from the pontoon.

Continue Reading
You may also like...
Related Topics: your city