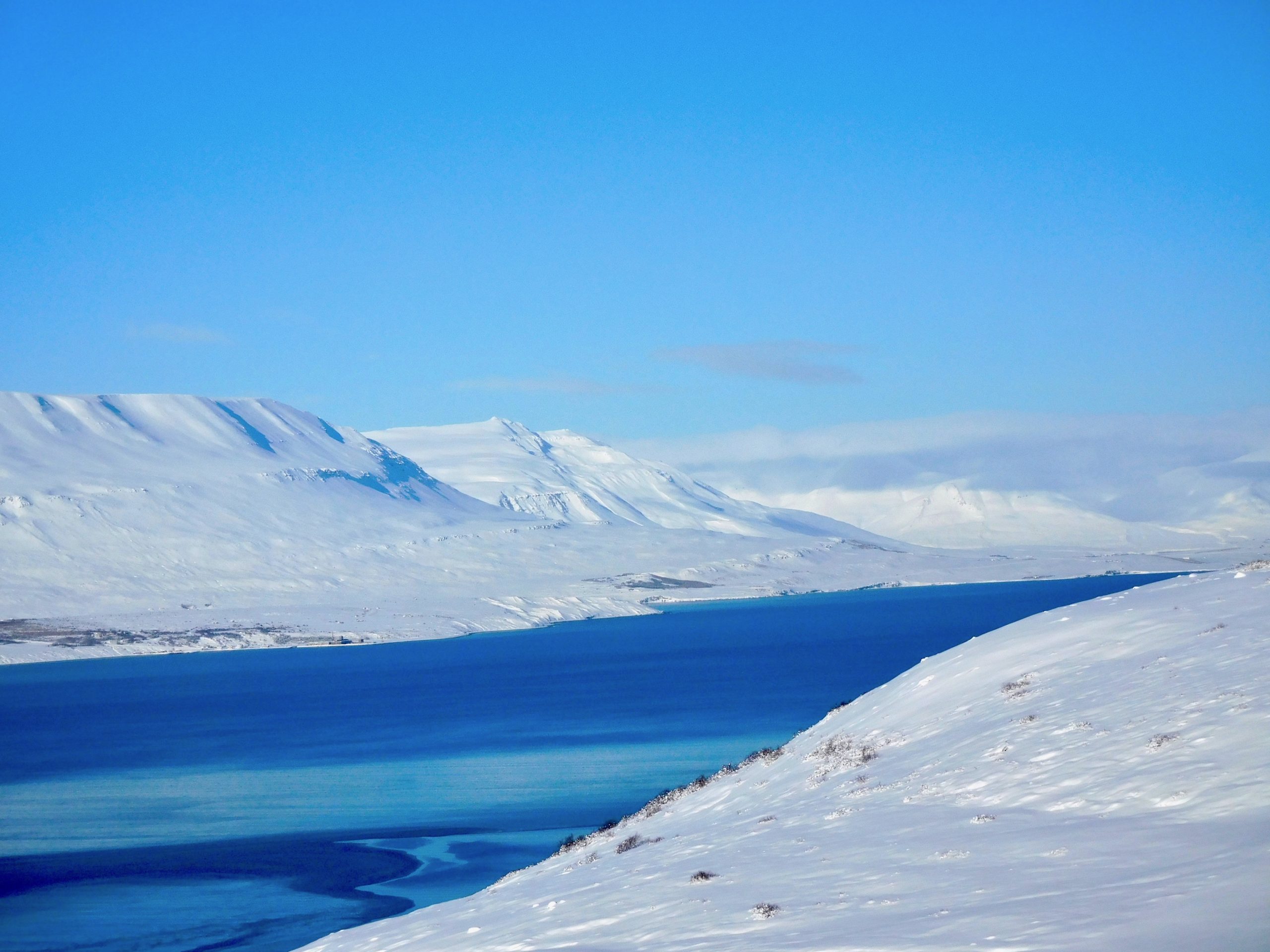 It was a beautiful, clear, sunny afternoon when we arrived at Keflavik airport in Iceland, picked up the hire care at the airport and set off to Reykjavik where the main street of the capital is more like that of a small town.

It’s not surprising, as the whole of Iceland has a population of only 335,000 and even though two-thirds of them live in the capital, it’s still not enough to call it a big city.

It’s March, and I expected it would be spring, but it appears there are only two seasons, freezing cold and not quite so cold.  The highest temperature ever recorded in Iceland was 30.5C in 1939! 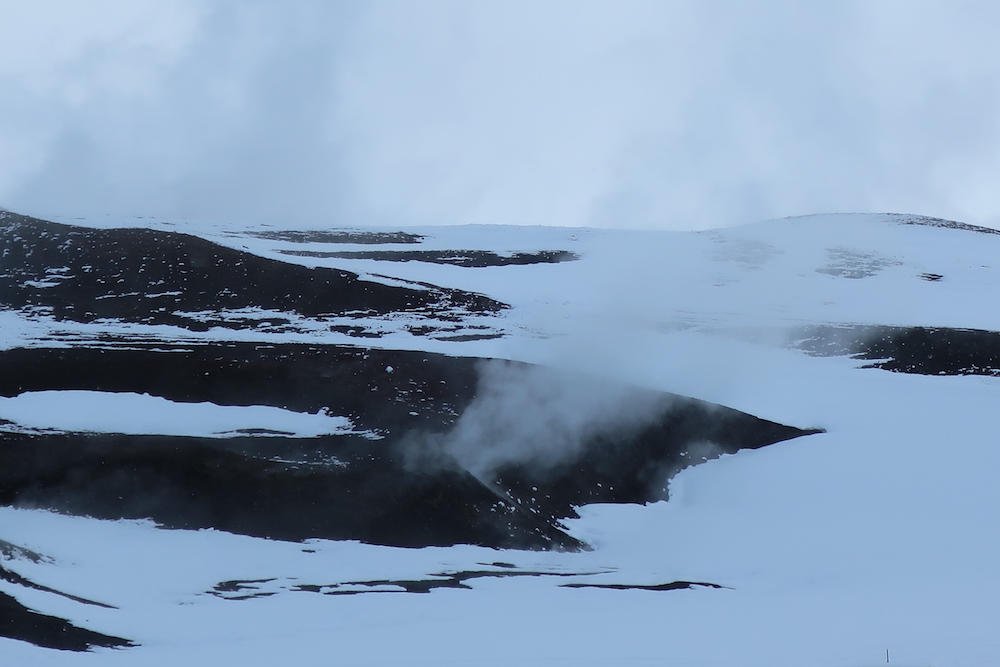 In fairness, Iceland is greener and Greenland is icier so I remind myself of this as I pull on hat, scarf, gloves and yet another layer of clothes before heading out.

There’s a bone-biting wind and waterbirds cluster in the small corner of the town pond that’s not covered in ice, but there’s not a cloud in the sky as the sun sets over Arctic blue waters around 7pm.

The biggest shock at this point is the price of food. It is expensive, and that’s without testing smoked puffin and a whale peppersteak. Four tiny dumplings for $24, and then it’s off to the supermarket to check out some dining options for the next 10 days.

It’s not cheap either, but when you think this is a small island that’s covered in ice where most food must come in from Europe, it is hardly surprising.

The next day the Winter Wonderland Magic tour begins in earnest.

The Iceland Tours 11-day package is heartily recommended. It includes hire car, bed and breakfast, and a comprehensive itinerary detailing where to head each day and what not to miss on the way, complete with mileages and expected travel times.

For the most part, navigation is by GPS coordinates rather than name, which works well as most places are unpronounceable and impossible to spell. 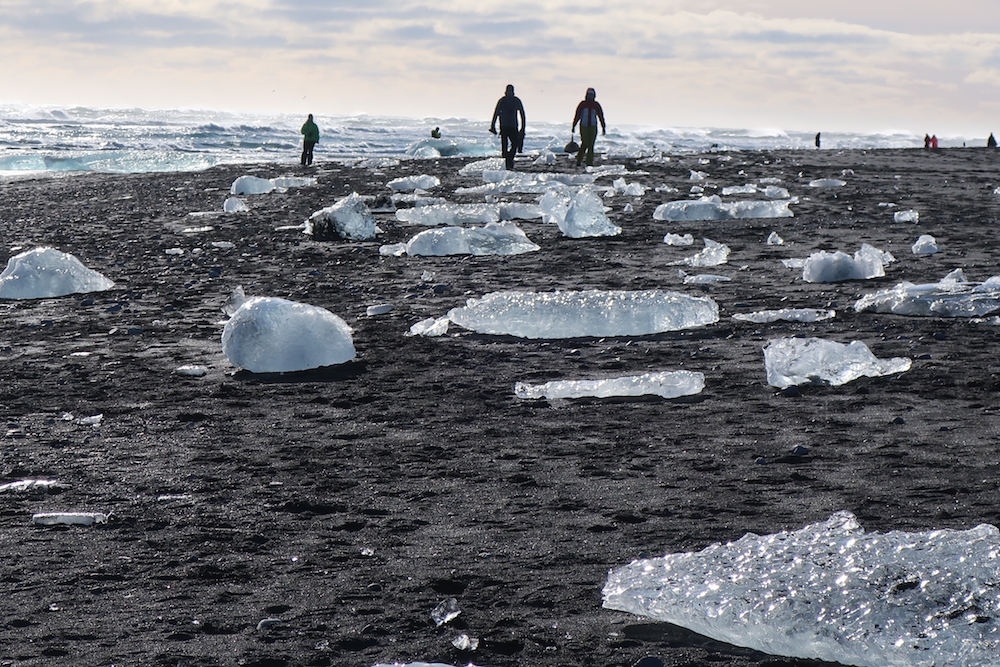 There is only one main road circumnavigating the island – a total length of 1300km – with some, but not a lot, smaller roads leading off to sightseeing spots and tiny clusters of houses, so it is hard to get lost. Daily distances are an average of only 300km.

It seems to be an icy version of the Outback, with limited roads and houses so remote you wonder how anyone lives there.

The first day is the day of waterfalls, lots and lots of them and most of them frozen.

Pingvellir National Park is world heritage and a geological wonder of the world. You can see the effects of tectonic plate movement, cracks and fissures in the earth’s surface.

It’s a desolate and barren landscape and a surprising place for the first Icelandic parliament to have been founded in the 10th century.

Picnic tables encased in ice are a sign that this will be a different place in that brief window they call summer. A dog sled team leaves it tracks across the wilderness.

Among the frozen waterfalls is a thermal area where steam billows out of the ice, boiling pools and a geyser at Laugarvatn. Strokkur, the main hot spring, fires up every five to 10 minutes. 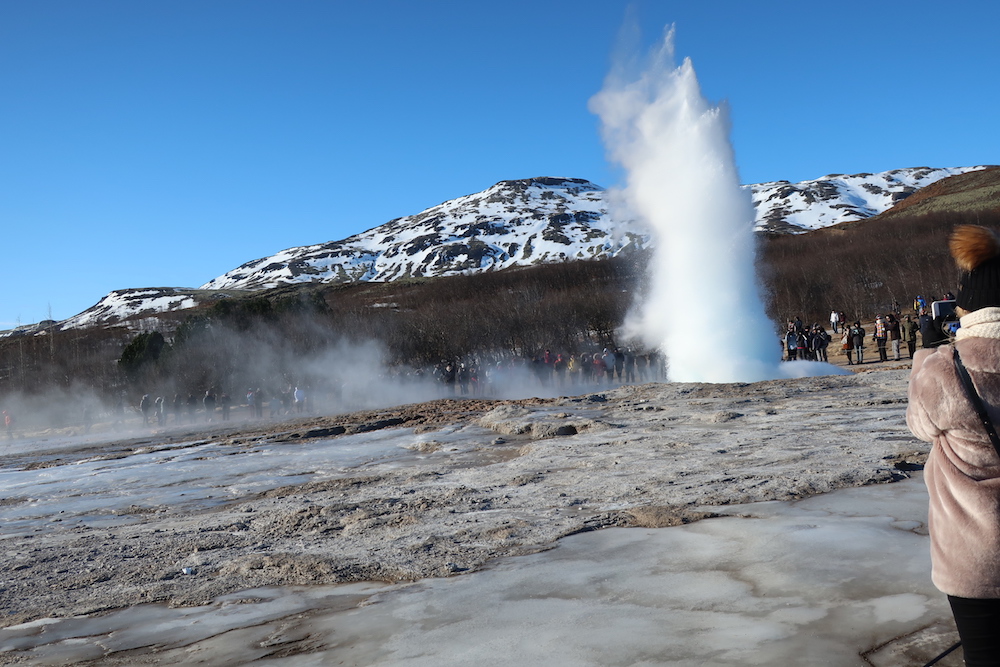 Strokkur, the main hot spring, fires up every five to 10 minutes.

Gullfoss the “golden waterfall” drops into a deep ravine and is billed as one of the country’s most beautiful. Then there is Skogafoss, the highest waterfall in Iceland.

Houses are few and far between and the landscape swings from volcanic rock to snow and ice.

The next day is glaciers. Lots of them. Through lava fields known as the Black Desert of Myrdalssandur and Eldhraun (lava of fire) formed during a huge eruption in 1783, we arrive in Skaftafell National Park at the base of Vatnajokull, the largest glacier in Europe.

Glaciers lined up one after another, ooze out of the mountains. Mt Hvannadalshnukur, the highest mountain in Iceland at 2110m, thrusts out of the Orafajokull Glacier, a volcanic crater about 5km in diameter which is full of ice.

A beach the “polar” opposite of Queensland is clean black sand dotted with chunks of crystal clear ice and icebergs sit at the surf’s edge. Any white is snow.

The ice washes down from a nearby glacier and into the spectacular Jokulsarlon glacial lagoon before breaking up into huge chunks and floating down a fast-flowing river to wash up on the beach.

Day three and it’s fjords. Lots of them too, as we head north along the east coast and then west to Egilsstadir. The Almannaskard tunnel replaced a steep and narrow pass that regularly cut traffic during winter. Thank goodness, as there was to be enough winding around fjords and over mountains on icy roads while the snow comes down in clouds. 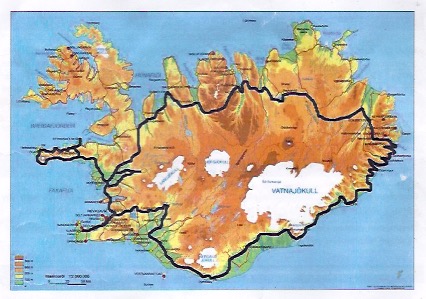 The journey around Iceland.

Fortunately, rather than snow chains, the car’s tyres have metal studs which give good grip in the ice. And of course, we are driving much slower than the average Icelander, although the speed limit is always 90kmh on road No.1.

At Djupivogur we see one of the few manmade attractions. Eggin, a sculpture by Sigurdur Gudmundsson, is a series of 34 giant stone eggs sitting on plinths around the harbour.

The drive passes spectacular towering mountains on one side and sparkling blue water on the other before the landscape turns monochromatic.

Eggilsstadir is the main town of East Iceland and is on the 35km long Lake Logurinn, Iceland’s third largest. Heading into north Iceland and Lake Myvatn, it’s snowing, a lot, as we pass  volcanoes, craters, lava fields and thermal pools.

It’s a lunar landscape through the Modrudalur highlands of the north-east. High cliffs and rugged snow-capped mountains look like a cluster of peaks in an alpine range.

Deep white snow over black lava rocks looks like choc chip icecream as far as the eye can see, while snow drifts dust the mountain tops like icing sugar on a muffin.

We are now about halfway around and it’s again a monochromatic landscape, as pure as the driven snow. 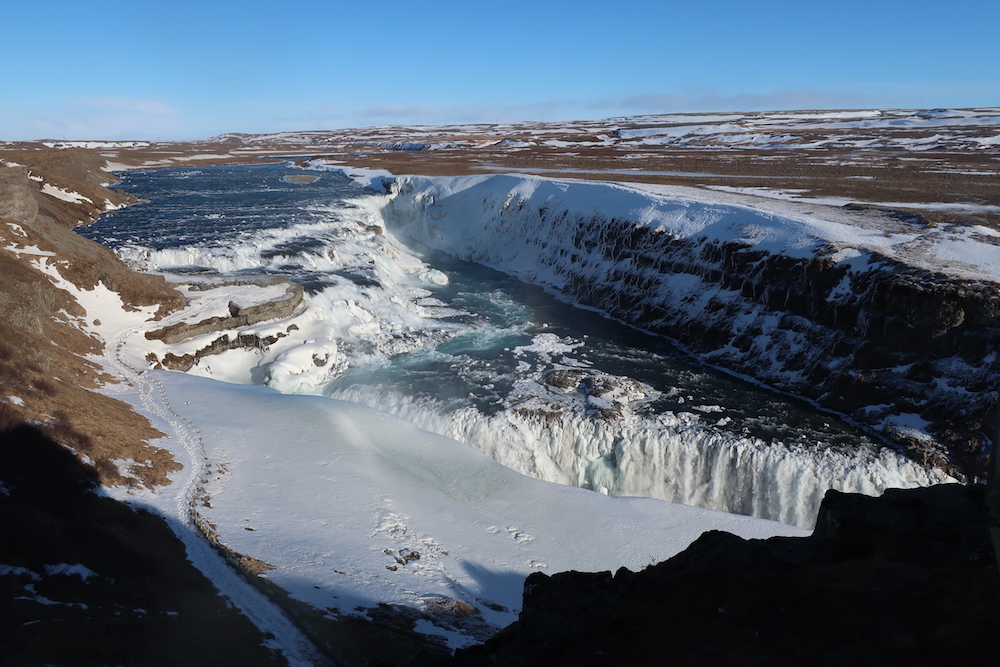 Waterfalls are spectacular, even when frozen

Through fields of fat marshmallow snow stop at the 12m Godafoss waterfall “waterfall of the gods”.  In the year 1000 a chieftain was entrusted with deciding if Icelanders should adopt the Christian faith. When his decision was formally accepted, he went home and threw his statues of pagan gods into the waterfall, hence the name.

Akureyri, the capital of the north, is at the end of a fjord and it was literally breath-taking as  it appeared bright blue out of the white.

It has a population of about 15,000, an imposing church and an outdoor swimming pool. An Icelandic swim team training in the pool brings to mind the Jamaican bob-sledders.

Heading south to Borganes, the roads are still ice covered through a valley of heath most of it dusted in snow, and stop at the Glaumbaer turf houses. Even the fence is made of turf. The buildings are extremely well preserved and to think people lived here is mind boggling.

Next stop is the Grabrok volcano, a cone-shaped mountain formed in an eruption 2-3000 years ago. We climb to the top and walk around the crater. 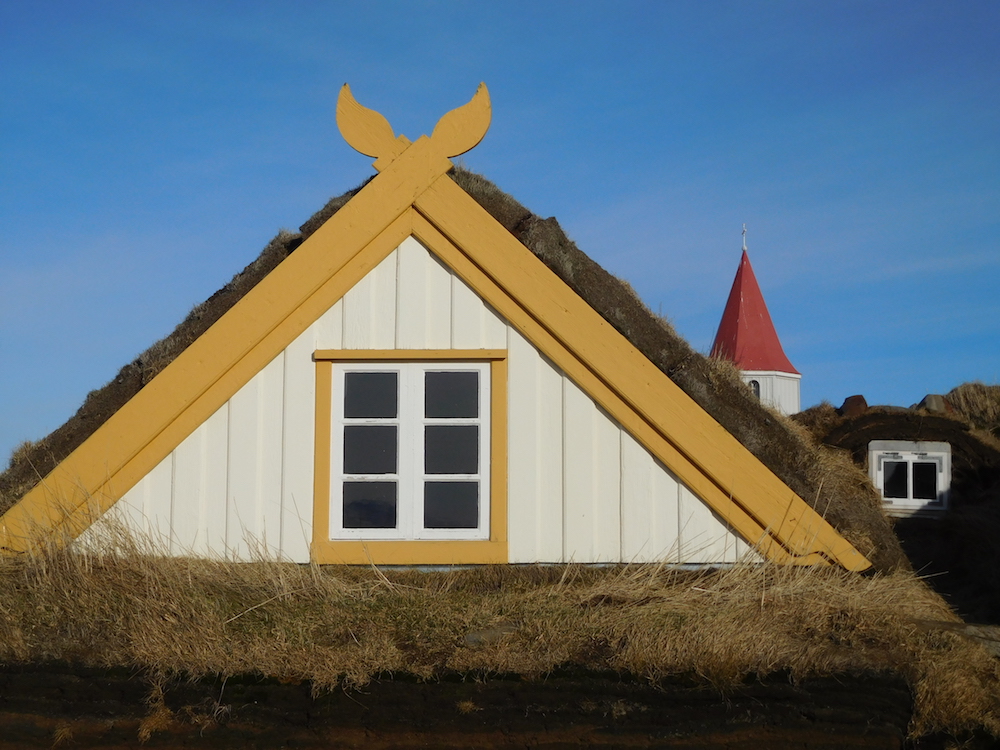 At the top we realise everyone else has spikes on their boots. The ice was well worn and slippery, so it was hair-raising getting back down but the views from the top cancelled that concern.

Then it’s on to the Deildartunguhver where hot springs pouring out of the ground are harnessed for power. Little bubblers spring from the rock as well as from underground. Geothermal baths are nearby.

It is said if a troll doesn’t get home before sunrise it is turned to stone, and we have seen plenty of them among the lava formations.  Now we meet some big wooden ones perched on a hill at Fossatun where the wind cuts like a knife.

A trip around on the Snafellsnes Peninsula is another full day, easy on one side and a whiteout on the other as snow blows down from the mountain tops.

It’s then a peaceful and easy drive down the coast and back to Reykjavik. The 6km Hvalfjordur Tunnel under the fjord goes 165m below sea level and cuts about 45km from the journey. 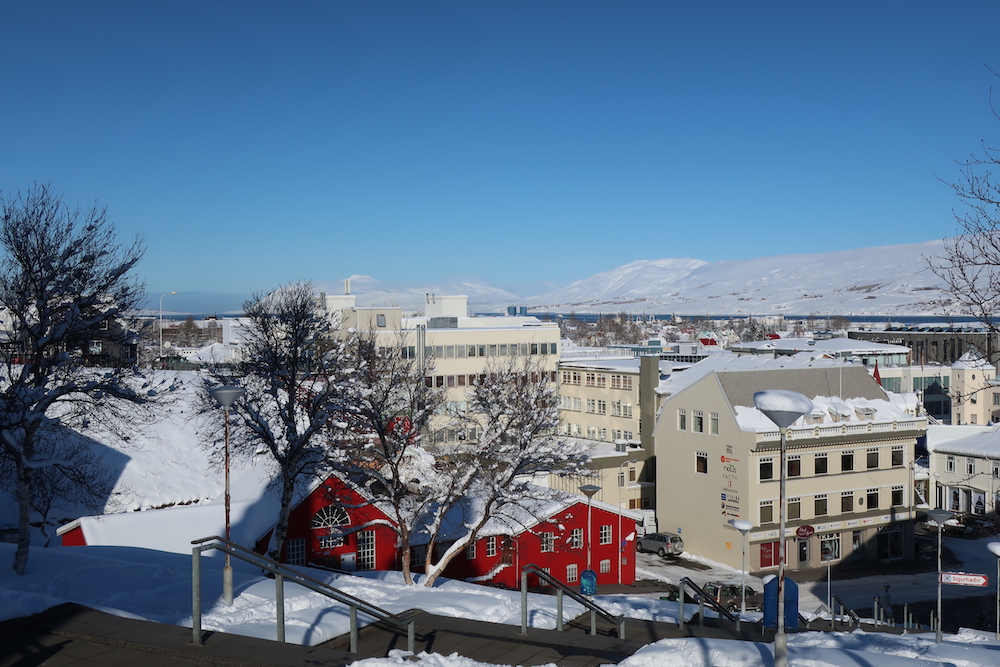 The Iceland capital of Reykjavik is more like a big village.

Stopping on the coast to admire the sea and the birdlife and, with Reykjavik in the distance, we felt some sadness that this was the last day out on the road. We had made it around Iceland.

But not quite willing to admit it’s over, we spend the last day exploring Reykjanes Peninsula. There’s the famous Blue Lagoon, the tourist hot spot of Iceland, an Icelandic version of the 12 Apostles and the bridge between two continents where the Eurasian and American tectonic plates meet.

Reykjavik also needs exploring. There’s Hofdi House where in 1986, Reagan met Gorbachev for a summit that was to mark the beginning of the end of the Cold War, as well as churches, statues and quaint houses.

Although we were a couple of old girls more than twice the age of most other tourists we met on the road – not that there was a lot of them – it was a grand escapade in a wild and beautiful country.