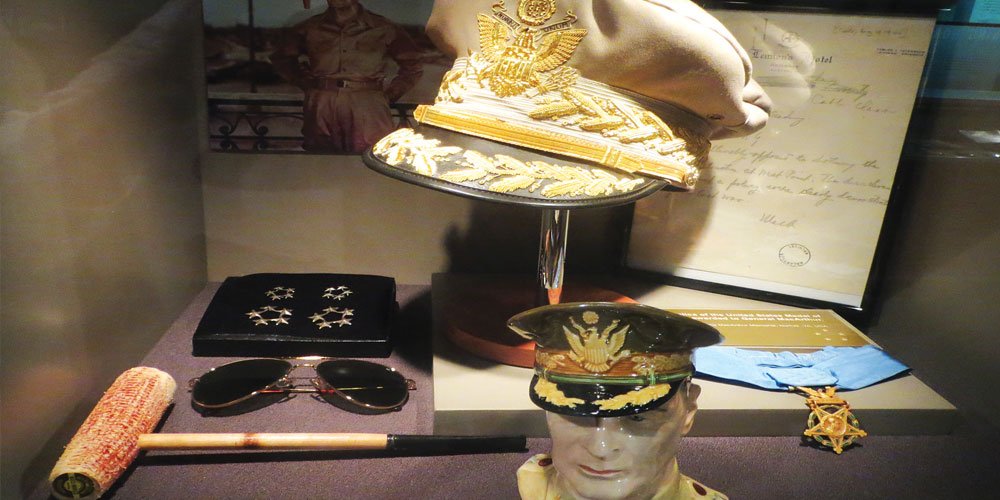 Why would an expression attributed to a US soldier leave its mark on a generation of Australian kids?

It could be because this is a local story for the previous generation of Queenslanders – those who grew up in wartime Brisbane.

The great American general was based in the Queensland capital from July 1942 until November 1944 and it was here that he established his command centre for the war in the Pacific.

His rooms are now a museum in the 10-storey MacArthur Building, then known as the AMP building, at the end of the Queen Street Mall where it meets Edward St.

For travellers missing the wonder of discovery, it’s like stepping back into another time and place once those lift doors open on the 8th floor.

A trip to the MacArthur Museum Brisbane is not only the story of Brisbane’s role in World War II, but also covers the life and times of wartime Australia.

It’s an easy walk from Central Station to the entrance on Edward St, but apart from an easily-missed heritage information sign on one corner, and a brass plaque, there is little to announce that this inner city building housed an integral part of the war effort.

The building alone is worth observing. It was built in 1934 for the Australian Mutual Provident Society and renamed to honour its wartime role.  It’s said the defence forces chose it for its location, appointments (which are grand) and solid construction. The roof is of two sections of reinforced concrete each 30cm thick.

Distinctive features are its great bronze doors and windows, paired Tuscan columns and pilasters and marble statuary over the entrance. Now, back to Macarthur.

Great secrecy surrounded his move to Brisbane and while the people of Brisbane might have seen him ducking out for lunch with his wife and son Arthur (Arthur MacArthur, really!) the official news said only that he was “somewhere in Australia”.

The plaque sums up the importance to the war in the Pacific: “In this building General Douglas MacArthur Supreme Commander Allied Forces South West Pacific established his headquarters on 21st July 1942 and here he formulated the initial plans which led to final victory over the Japanese forces on 15th August, 1945.

The museum today houses MacArthur’s office faithfully restored to its original splendour, the table around which the war plans were made and, what makes it really special, easy to follow displays of how World War II affected the people of Brisbane.

As well as MacArthur and the war effort, topics covered include the war brides; the so-called Brisbane War, a night when the Aussie boys tackled the Yankee soldiers who they feared were taking their women; schools that closed until slit trenches were built around playgrounds to make them safe from air attack; rail transport and even how Vegemite was sent to the troops to keep them strong.

In all, it’s a fascinating day out close to home.  The MacArthur Museum Brisbane is open Tuesday, Thursday, and Sunday 10am to 3pm. Admission is $10 adults and $5 seniors and groups.

Safety measures have been put in place but due to Covid-19 restrictions, visitors can only be accepted by pre-bookings.