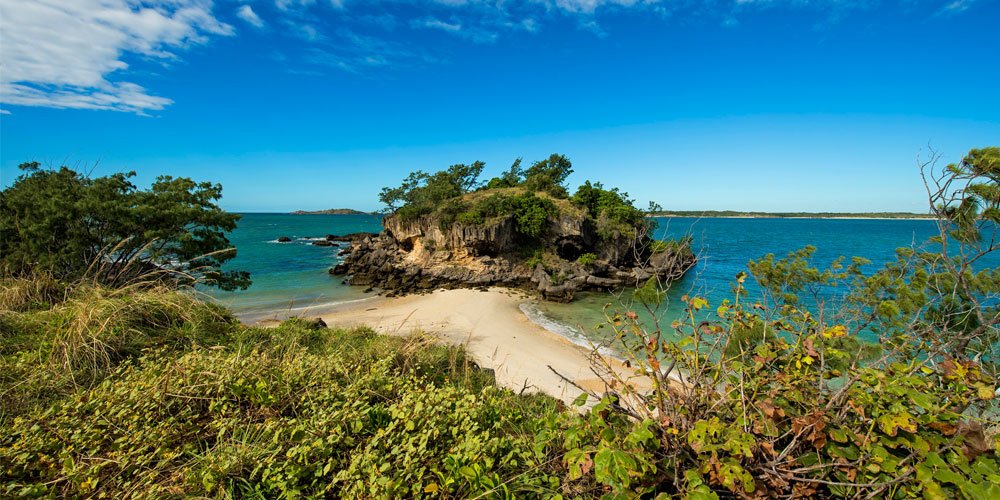 With borders opening up, travellers can start to expand their horizons and there’s never been a better time to head north by north-west to the Top End.

Whether travelling by road for the long haul or taking a flight into Darwin for a short escape, there are plenty of options to explore parts of the country that  have remained a well-kept secret.

In fact, there are many good reasons to tick the Northern Territory off the bucket list. Here are some suggestions:

A short ferry ride from Darwin are the Tiwi Islands, nicknamed the Islands of Smiles. Comprised of two main islands, Bathurst and Melville, the Tiwis are known for friendly locals, a love of AFL, rich indigenous culture and unspoilt beaches.

SeaLink’s Tiwi By Design is an immersive art and cultural day-tour introducing the Aboriginal community of Wurrumiyanga. It includes a Welcome to Country with a smoking ceremony and totem dances, and a screen printing workshop at Tiwi Design to print your own traditional Tiwi souvenir.

The shores of Paddle Pop Rainbow Beach resemble the pastel pinks of an ice cream and are the perfect backdrop to set up the picnic blanket and watch the sunset.

Off the coast of Bathurst Island,The Tiwi Islands Retreat is a private, beachfront resort with options for a hotel-like stay or glamping.

One of Australia’s last true wildernesses, Arnhem Land was voted by Vacaay as one of the top five micro-regions to see in 2021.  It hosts Garma Festival, Australia’s largest Indigenous cultural gathering, and offers a diversity of landscapes, from monsoonal forests to savannah woodlands, wetlands, wild coastlines, deserted tropical islands and soaring escarpments.

In East Arnhem Land, pristine Groote Eylandt is famous for its world-class fishing.

At West Arnhem Land, stop at Injalak Arts and Crafts, a gallery showcasing the work of more than 200 Indigenous artists, or spend a day in Garig Gunak Barlu National Park, which is fringed with white beaches.

Dual World Heritage-listed and the largest terrestrial national park in Australia, Kakadu is an incredible nature reserve, teeming with monsoonal forests, wetlands and waterfalls. The park is home to a quarter of all Australian freshwater fish species, one third of bird species and the Territory’s crocodiles.

Some of world’s most incredible Aboriginal rock art can be found here at Ubirr. Jim Jim Falls is one of the Kakadu’s most recognisable and photographed destinations. Surrounded by monsoonal forest and dramatic cliffs, the 200m waterfall cascades into a deep plunge pool and family-friendly beach.

Located 90 minutes’ drive south of Darwin, Litchfield is a favourite among locals thanks to its accessibility and pristine natural beauty.

One of the park’s most popular cascading waterfalls, Florence Falls, has panoramic views of the valley, sandstone plateau and lush monsoon forest.

Hundreds of Magnetic Termite mounds stand up to 2m high and are thought to be at least 100 years old.

Now fondly known as the East Macs they offer some of the best outback spots and landscapes for bush-walking, camping and four-wheel driving.

Walk in Trephina Gorge Nature Park, known for its quartzite cliffs and River Red Gum-lined watercourses and see the history of Central Australia’s first-ever town, Arltunga, once a gold mine site.

A handy day trip from Alice Springs, Finke Gorge National Park is an important wilderness reserve, home to the Finke River, one of the oldest rivers in the world, and Palm Valley, which shelters groves of red cabbage palms.

Drive to the park’s various hiking tracks, including Kalaranga Lookout, which offers amazing views of sculptured sandstone amphitheatre, and the Mparra Walk, which introduces travellers to an Indigenous dreamtime story when walked in clockwise direction.

Rainbow Valley, 75km south of Alice Springs, is renowned for its scenic sandstone bluffs and cliffs. The rock bands change from ochre and red to orange and purple in the early morning and late afternoon, offering some of the Territory’s most magical sunrises and sunsets.

Considered the spiritual heart of Australia, this park should be on everyone’s travel radar.  It is home to Uluru, the world’s largest monolith as well as the lesser known soaring rock domes of Kata Tjuta (the Olgas).