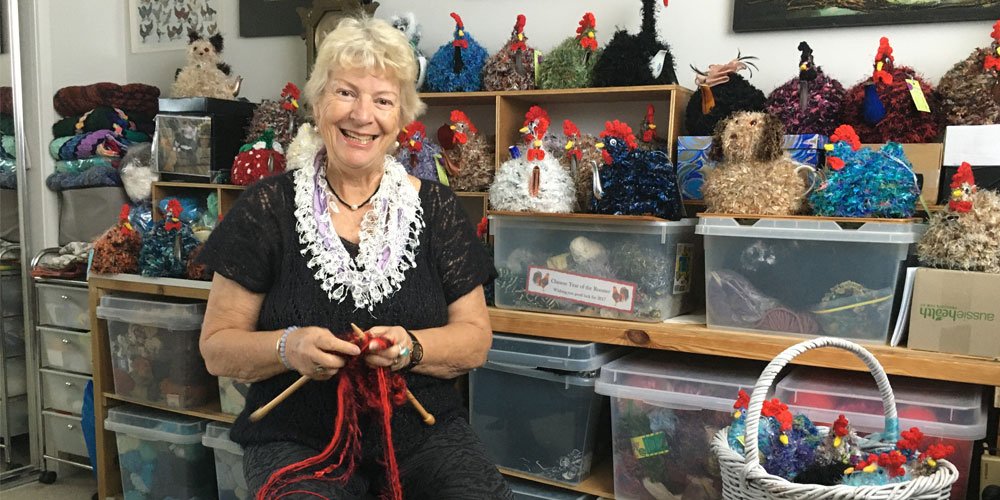 Living in a high-rise apartment with several hundred chickens, some brush turkeys and the odd koala and dog might sound a bit crowded but Yvonne Waldvogel wouldn’t have it any other way. You see she’s a bit of a knit-wit – crafting whimsical tea cosies using chunky knitting needles and a crochet hook.

The result is a spare bedroom filled with fluffy poultry and various animals perched cheerfully on dozens and dozens of op-shop teapots.

The knitting began when she was just five at her home in Switzerland, thanks to lessons from her maternal grandmother, but the inspiration for her delightful chooks came during a long road trip from Darwin to the Red Centre over more than four months in 2012.

She and husband Jim Lombard were travelling in a sedan and would stop and visit friends along the way.

She made one of her quirky cosies as a thank-you for their hospitality – and the great tea cosy obsession began.

Drawing inspiration from a book by Loani Prior, Yvonne’s knitting began taking imaginative turns and before she knew it, she had crafted two dozen cosies for various friends.

Some featured crocheted flowers on top but then, by Yvonne’s own admission, “I got a bit lazy”.

She began experimenting with multiple strands and textures of wool to create her signature fluffy chooks with a crocheted comb and wattle.

Different wools give different effects and each creation has its own personality which she says emerges as she knits.

During the past four years Yvonne has knitted and sold more than 2600 of them, usually for an average price of $29.

She vividly remembers selling her first cosy at a show at Mount Mee.

“In fact, I sold three. I was absolutely excited, and I could see my future right in front of me. It just grew,”

She shows at craft shops and online orders are a work in progress.

“I had an epiphany and called it The Cosy Affair. I sold one online, but I haven’t really tried very hard,” she says.

When the Covid-19 pandemic brought things to a temporary halt, she gathered up her woolly flock and allowed them to roost in her spare bedroom.

Her work has gone all over the world – “from Greenland to Patagonia”, although one of her biggest fans is her husband Jim.

French-speaking Yvonne left her native Switzerland 40 years ago, and ran a café in Sydney with Jim when they first arrived in Australia. They moved to various towns from Mackay to Darwin, before settling in Caloundra a decade ago.

Jim, who now is kept busy helping run the Caloundra Men’s Shed, worked in Swiss watchmaking and, as an electrical engineer, worked in domestic wastewater treatment in Darwin.

In 1982, he helped develop one of the first bar code readers for Woolworths – also used for seating at the Opera House – but the project was shelved in favour of a US system.

Their son Nico, who was born in Mackay, is a graphic designer and program manager for Imparja television in Alice Springs.

But Yvonne, who has her spare bedroom/craftroom organised with military precision with wools in containers for colour and texture and creations displayed in rows, is now concentrating on her tea cosy and egg cosy production line.

“I’ve been making one a day for the last seven years, but with the pandemic I’ve only made 80 since Christmas,” she says.

“With the shops reopening, I’m back in business.”

She has also branched out into other animals and birds – such as an elegant black swan, koalas and brush turkeys – and into quirky tissue box covers and little chick egg cosies, but the chooks remain her favourites. They are also a favourite with her customers.

One thing is certain, Yvonne is as clucky about knitting as ever. 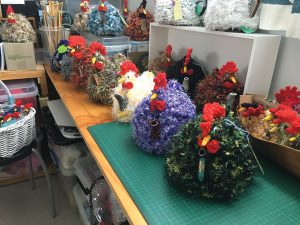 Some of the many hens
sitting on their teapots in Yvonne’s spare room.

Batten down the hatches
Former Wallaby always on the hop