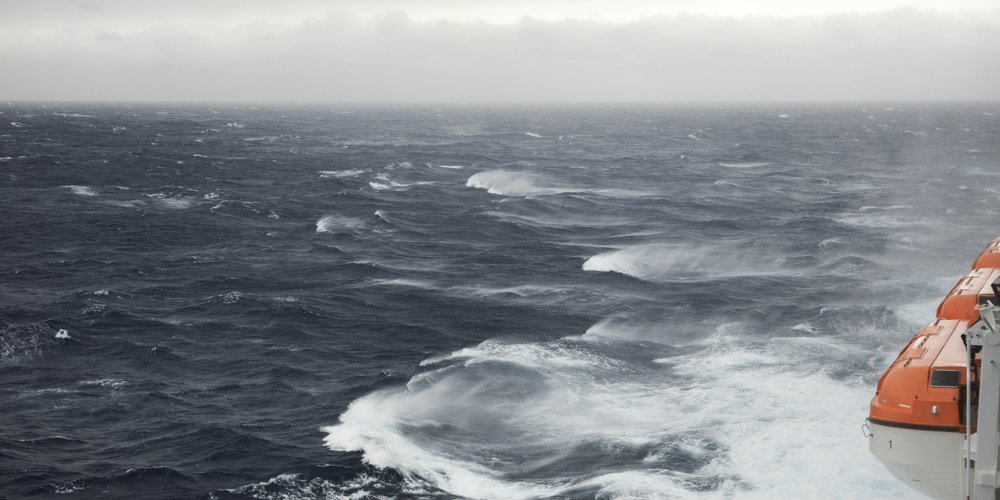 Many years ago, in my sea-going days, I had one particular trip that could be termed a disaster.

With a couple of return voyages from England to Australia plus a few cruises around North Africa, Canary Islands and Scandinavia and various other places around Europe under my belt, I figured I was an old hand at this type of work/travel.

I’d been working on the ship long enough to conquer (partially anyway) the dreaded motion sickness, or in other words, I had my sea legs.

We were outward bound on a trip to Australia, carrying migrants so there was little work for myself and three workmates as there was no cabin service, although we still had to staff the switchboard covering 24 hours.

On previous trips, we’d been through several quite severe storms, always being warned beforehand.

Each time, when going to the dining room at mealtimes, the old experienced hands warned us to “always go for meals and eat up well as there’s rough weather coming”.

It was good advice as it was easier to deal with peaks and troughs on a full stomach, while attempting to stay vertical.

We had come down through the Red Sea with nothing more eventful than a sighting of the thickest mass of jellyfish I’d ever seen. The sea appeared as a white mass for as far as you could see with hardly a space between the creatures.

It took three hours to come through them. I wish I still had the photos, but I lost those in a disastrous event years later – but that’s another story.

Leaving Colombo, on that lovely island then known as Ceylon, we received notice of a severe storm ahead.  As we had seven days in which to cross the Indian Ocean, we all wondered what we were in for, but figured we could handle it.

Shortly after leaving port, the sea became choppy, then rougher, and still rougher. Surely this wouldn’t last too long!  We found though, that this particular ocean had far more it could throw at us. And it did, with a vengeance.

We were not a large ship (78,000 tons) but large enough, we thought, to ride out the worst it could give us.

She had stabilisers but we rocked and rolled for hour after hour with no let-up, on an ocean with extreme peaks followed by troughs so deep we thought we would end up on the sea floor.

One evening my cabin mate and I were both off work. She lay in the top bunk and I was in the lower. It was easier lying down than trying to stay upright.

The wind lashed furiously at the vessel and it was mind-numbingly hot, with no air-con.  Also, we had been completely battened down since leaving port, which made it even hotter. The punkahs that supplied air into each cabin were working, but it was warm air and gave no relief.

Slapping the sides of the ship with unbelievable force, the storm, like an angry, evil creature, seemed determined to destroy us. The noise and the sheer power of it was nothing short of terrifying.

Above the din my workmate shouted, “I don’t think we’ll get through this”.

“Me neither,” I shouted back.

The weather system kept up with such ferocity for seven days and even the old hands said they’d never known weather like it.  We were still required to work our shifts in the switch room though.

Besides, as one girl said, “we are in uniform and we have to keep up appearances”. None of us wanted to lose face.

We kept upright, even going down to the dining room for meals, although only crew members were there.  All passengers were horizontal in their cabins.  Eating was probably the last thing any of them wanted to consider.

We did feel sorry for them.

After seven days crossing that ocean, when we finally sighted the West Australian coast, everyone heaved a huge sigh of relief. Even the crew.

A line of ambulances stretched way out of sight, and then it was all hands on deck to move the sick to stretchers. How they found room in the local hospitals I will never know. I’m quite sure they didn’t deal with situations like that every day.

What an introduction to a new country for those unfortunate migrants.

I’ve often wondered how they fared and how long it took them to recover. As for us, we never faced weather like it again, although I made quite a number of sea trips at that time and in the years since.

Four years later I became a migrant myself!

Rule out the reversible – it may not be dementia onset

Word of mouth – the changing face of dentistry

From Poland to Yandina Creek