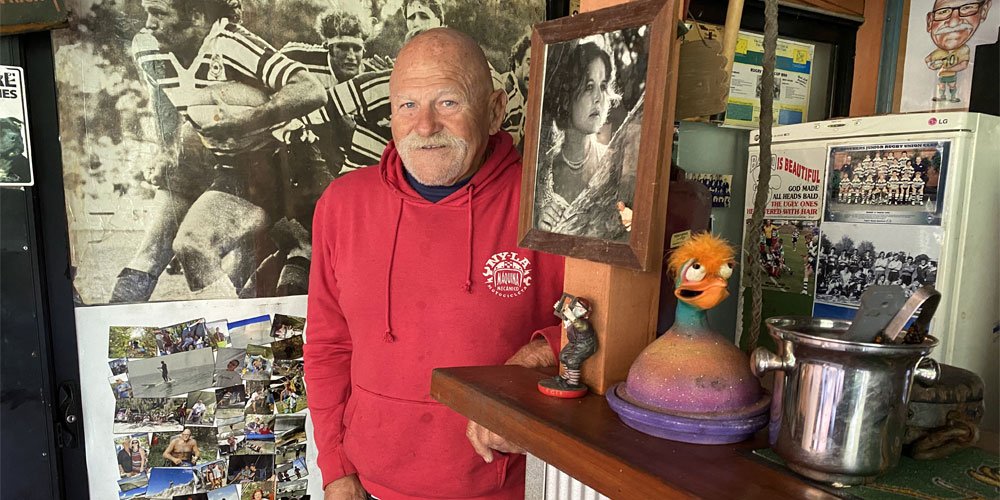 A former Wallaby rugby player and now, at 75, one of Queensland’s oldest lifesavers, Dick Cocks is a man who loves being on the go – whether it’s stand-up paddle boarding, a gym workout, cycling or just entertaining mates from behind the memorabilia-trimmed bar at his Coolum Beach home.

He was also a keen runner until wear and tear caught up with his knees and a hip replacement curtailed his action-man antics.

But for an ex-rugby union stalwart, there has been none of that “going to seed” that some footballers seem to suffer.

Dick is still superfit and travelling well, mentally and physically, at the home he shares with his South African born wife Glynis, who is 11 years his junior.

Rugby fans will remember Dick as a fiery No.8 on the flank, playing for a multitude of regional and state teams and wearing the green and gold for Australia in the 1970s.

He recalls one of his first Wallaby games as a Test against France and “the dirtiest” as a clash at the Sydney Cricket Ground which ended in a draw.

“I got a good old headbutt,” he says ruefully.

His playing resume reads like that of a rugby union rock star, from kitting up with the New South Wales Waratahs, the Brumbies, Force and Melbourne Rebels, captaining the Queensland Reds, captaining the Natal Sharks in South Africa and playing for Brothers In Brisbane among some of his stints – on top of his distinguished Wallaby career.

Dick’s last game for the Wallabies was against Japan in the first Test in Sydney in 1975. All up he was capped 10 times and played 549 representative games.

The rough and tumble of rugby – which has also included being a selector and coach – are quite a contrast to his distinguished career teaching geography, economics and legal studies to high school students.

He has worked in state and private schools around Australia and South Africa, a country he regards as his second home.

At times he also has turned his hand to working for a surveyor, for a frozen food company and even running a restaurant.

Dick was teaching at a high school at Durban in South Africa from 1976 to 1977 when his mother became ill. He returned to Brisbane and taught at both Nudgee and Ashgrove colleges.

After his mum died, he returned to South Africa in 1979 and taught at Westfield Boys High School while playing for West Natal and it was there that he met Glynis. They married in 1987 when he was 42, and have two children – daughter Lesley born in 1991 and Michael, who arrived two years later.

Dick is the first to admit that his name has been quite the talking point throughout his life.

Born Michael Richard Cocks, Dick said he preferred to be called Richard after his grandfather with the same name.

Teaching “out bush” and in the Aussie way, everyone soon shortened Richard to Dick and so the combination, sure to draw sniggers, was born – and stuck.

Big, burly, footballer Dick could certainly handle the digs and he laughingly recalls when he was first teaching at Gundagai he knew a woman called Rosie Roots, who lived in Punch Street – and by combining all three unlikely names he has had a  story to dine out on for life.

He remembers telling a mate who came to see him: “Yes, I’m Dick Cocks and you’ll find me with Rosie Roots on Punch Street”. The reply was “Don’t be ridiculous”.

“When I ring up someone they say ‘beg pardon’. Yes, I’ve had a lot of mileage out of it,” Dick says.

On Wallaby tours when they’ve announced him at places like the Houses of Parliament and Buckingham Palace, there has always been a double take and sometimes uproar.

A lifesaver from way back, Dick joined the Coolum Surf Lifesaving Club and became vice-president of the Nippers when the family moved to the Sunshine Coast from Brisbane to make a permanent residence of their holiday home in 2008.

Once over 65, members are not permitted to do regular patrols but Dick remains active, helping out with the club where his two kids have also been regular members.

The family has done a lot of travelling together over the years – to South East Asia, New Zealand and the United States – and Dick still goes back to South Africa (pre Covid-19), which he regards as his second home, every couple of years.

His wife’s brother runs a sugar estate there for the King of Swaziland and he still has many friends there. And, of course, he likes to keep on the go.