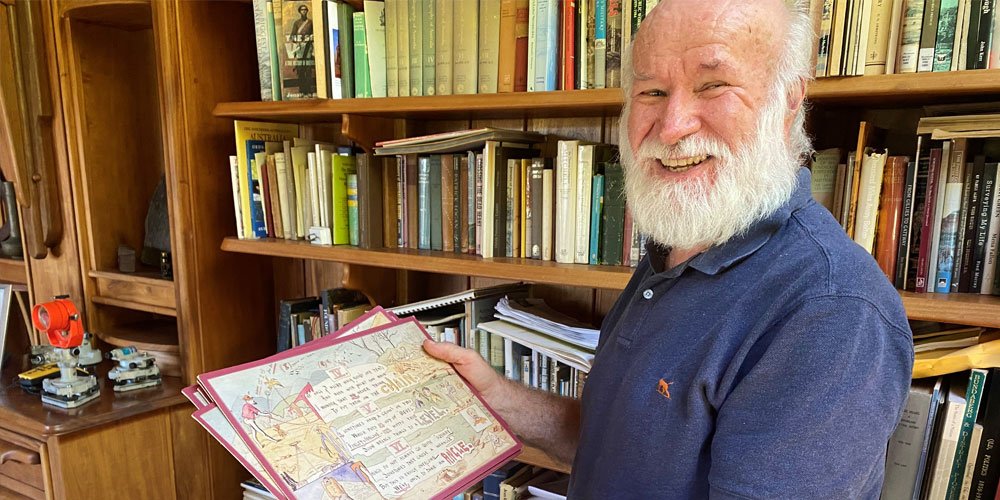 For a man who has spent his life excelling at planning, Bill Kitson’s life and career have not always gone according to plan.

Now well known around the world and many times awarded as an accomplished surveyor and retired senior curator of the Museum of Lands, Mapping and Surveying in Brisbane, Bill grew up with dreams of being a fisherman and, later, perhaps a geologist.

But fate – and his father – had other things in store for him and together with his forever lively, inquiring  and determined disposition, plus a burning desire to never be bored, he ended up officially surveying much of Queensland.

Now living amid the rolling green hills of Witta near Maleny on the Sunshine Coast with his Dutch-born wife of 53 years Angeline, Bill says no one is more astonished than he about how his life turned out.

“I’ve been lucky,” he says simply, with the broadest of grins that underlines the impression that this talented surveyor and researcher is quite possibly the happiest man alive.

Bill, now 76, grew up in Ayr, North Queensland, where his father was the chief cane inspector for the sugar mill and where he and his schoolboy mates would fish every weekend in the Burdekin River for barramundi.

He was happy to do just that for the rest of his days, but in his words “Dad saw me as a bum and sent me to boarding school”.

From a carefree life and wearing no shoes, Bill said it was “a cultural shock beyond belief” to end up at the Brisbane Grammar School as a boarder for four years.

Describing himself from his Kalamia State and Ayr Intermediate school days as “a poor student”, Bill struggled at first but with extra tuition his natural academic traits shone through and he ended with two scholarships to universities.

“Dad pushed me on and for that I am eternally grateful,” he says. 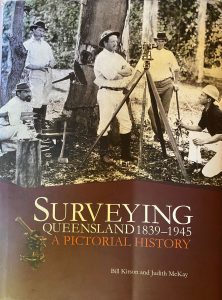 Bill accepted a state scholarship to the University of Queensland but because all degrees also needed language skills and Bill’s German attempts ended up with 0 per cent, he had to forgo his first choice of geology. Instead he studied a Bachelor of Surveying which was the only one not requiring a separate language.

He became a government surveyor but said: “I had a problem with boredom … doing 20-30 miles of road over six months was so boring”.

In search of adventure he began working on the Brigalow Scheme for private surveying firms.

“We climbed mountains, we cleared hills, we measured all the borders of Queensland and I was as happy as a pig in mud.”

But when they tried to take the best field surveyors in as managers in the 1970s and ’80s, Bill’s smile disappeared.

“They saw me looking forlorn and asked why I wasn’t applying (to be a manager) and asked me what I wanted to do.

“I said I’m interested in surveying history, let me start a museum.” And together with his cartography friends, that is exactly what he did.

It started as the Museum of Land, Mapping and Surveying – the department, founded in 1839, is the oldest government department in Queensland – in the Lands Administration Building (now the Conrad Treasury Hotel) but is now above Central Station.

The collection’s importance was recognised when it was formally gazetted as a branch of the Queensland Museum.

When they wanted him to attend meetings, which Bill always saw an enormous waste of time, he put on his crankiest demeanour and along with his big, black beard, which he says made him look like Ned Kelly, and the higher powers of the public service decided to simply let him be.

When people didn’t seem to spend much time in his museum looking at the historic surveying equipment he had collected, Bill asked a library friend what to do.

She told him not everyone was interested in looking at theodolites, compasses and sextants and he needed to delve into some social history, so Bill began searching.

“I found there were 700 dead surveyors, from the first ones in Moreton Bay in 1838, to 1950, so I became a mini genealogy centre and found their relatives  all around the world.

“They sent me letters, diaries, poems, artwork and photos, everything that they knew, and a whole world opened up,” he says. “It was just magic. I was hooked and couldn’t stop.”

Bill said he would contact some distant relative and they would dig out a shoebox from under the bed and the excitement levels would rise – “it’s like finding the Holy Grail”.

He describes it as an addiction, the thrill of the chase, and it is one that has never waned.

He also admits to an addiction to growing orchids but even this was superseded by his investigations into the people who created surveying history.

Recognised as an expert in his field, Bill was soon in demand for talks and presentations and he estimates he’s done more than 2000 presentations all around Australia during the past 35 years.

These days he’s still doing them – even on Zoom.

But tracking down past land surveyors wasn’t the end for Bill.

For the last 15 years he has also been into maritime history, adding to his knowledge and collection by tracing the relatives of 70 commanders of vessels involved in maritime surveys of the Queensland coast from1861 to 1913.

The relatives have turned up from England to Goose Bay in Canada and Bill is excited all over again with every new find.

He wrote a book with prominent historian Judith McKay called Surveying Queensland 1839-1945, A Pictorial History, and now he’s on the cusp of publishing another on maritime surveyors.

“I’ll be dead before I run out of things to do,” he says.

“This is the only thing I’d rather do than go fishing.”