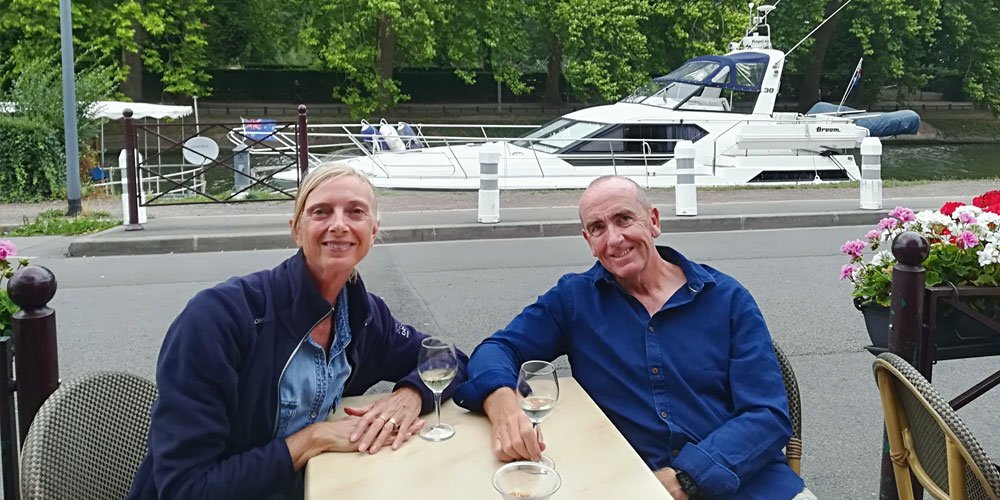 Doing their sums and taking the plunge to retire early, Geoff and Leanne Peters decided to swap the lure and freedom of the open road for something a little more cruisy.

So rather than hauling a caravan – with all the stresses and demands of driving long distances – this enterprising couple flew to England, bought a motorboat and have spent almost half of the last four years cruising the rivers, canals and coastlines of Europe.

It’s quite the change of pace for Geoff, 60, who many may remember as the tourism and sports co-ordinator at the Sunshine Coast Council, and Leanne, 59.

In fact it was a dream lifestyle – cruising on their boat, spending another portion of their year on cruise ships where Geoff was in demand doing maritime history speaking presentations, and the rest of the time house and pet sitting in idyllic locations.

That was until Covid-19 put a temporary halt to their luxury gypsy lifestyle.

But taking a hiatus during the festive season at a rented unit at Pelican Waters, they are now busily planning their next round of adventures for as soon as the pandemic comes under control.

“There are worse places to be marooned,” grins Geoff, while Leanne admits it is frustrating, but they are philosophical about it and making the most of it. Geoff has joined the local coastguard to hone his boating knowledge and help out.

Always full of great ideas and extremely tenacious in carrying them through, Geoff began his career in the Navy at the tender age of 15 before moving into work at the tax office.

He later worked for the Endeavour Foundation, and then moved on to local government, where he became known as the person who introduced the hugely successful Tough Mudder contest to the Sunshine Coast.

Leanne, whose background was in the army, met Geoff by chance at a social dinner when they were both living in Toowoomba. Sparks flew and last month on Australia Day they celebrated their 26th wedding anniversary.

Geoff says their lifestyle since they bit the bullet and retired early in 2016 has been nothing short of amazing, including meeting a range of wonderful new friends and high flyers.

They have even ended up rubbing shoulders with the stars at Wimbledon and meeting the director of Les Miserables at a theatre in London, who took them for a personal back stage tour.

Leanne is particularly enamoured with their occasional pet and house sitting duties in Europe and England which have taken them to tiny villages and places they would never normally have gone – walking dogs in leafy countrysides and meeting friendly locals.

This sideline began when they decided to invest the $200 fee and join Trusted Housesitters.

After a couple of gigs and glowing recommendations they found themselves in demand all over the world.

As they say, one thing just seems to lead to another as they meet different people and get swept in different directions.

Geoff said clearly they couldn’t sail a motorboat from Australia to England, so they flew to England to obtain a survey report and conduct a sea trial before making their purchase.

It’s a thrifty lifestyle, with mooring fees much cheaper than Australia and often many are free, so they have been able to explore many destinations they otherwise would never have been able to afford to stay.

While Leanne was bit apprehensive, they managed to strike good weather for crossing the English Channel to arrive in Dunkirk in France.

There they met another couple who encouraged them to slip across into nearby Belgium and – because they could – they changed their plans and had a wonderful first season exploring the Belgian countryside and villages.

“It’s not a lifestyle for everyone,” says Leanne. “It sounds as though it’s not stable but there is structure there. You can change it if you do change your mind.”

Geoff says much of the beauty of motorboat cruising is that you can moor in spots very close to the heart of villages and cities to make exploring convenient.

He says being called upon to lecture on cruise ships has been another new adventure – with Leanne accompanying him – and despite having no experience at public speaking, he has taken to it … well, like a duck to water.

This means they have been able to sail to other parts of the world in total luxury at no cost.

While they have cruised their boat around England, France, Belgium, The Netherlands and Germany, it is currently moored securely awaiting their safe return to once again begin their retirement adventures.