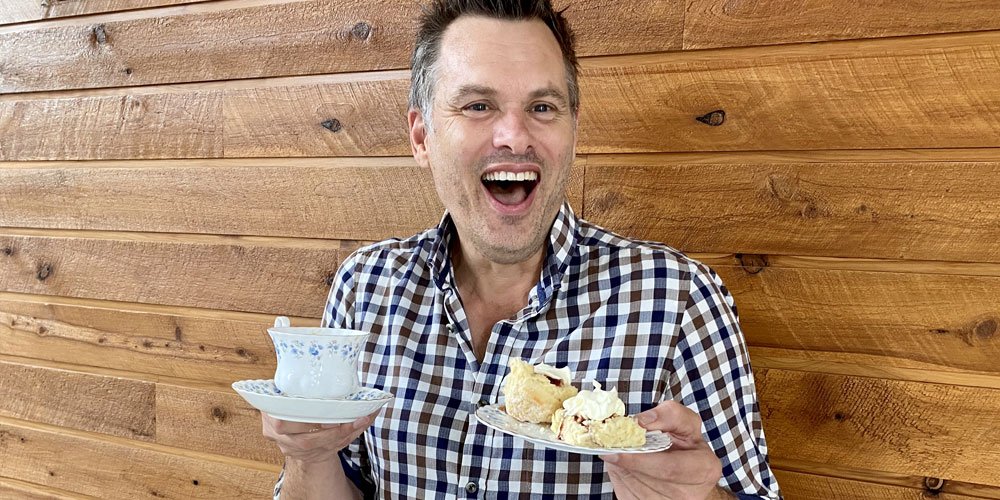 It was just a random pop-up on his Facebook page that caught Martin Duncan’s attention.

A 96-year-old woman in Scotland had come up with a remarkable solution to the isolation she had been feeling since her partner’s death 15 years earlier.

With no friends and family, she decided to hold morning teas to, as Martin puts it, “escape her cage”. The concept was a big success and Martin was sold.

“I can do this,” he told himself and so his novel networking idea – Scone Time – was born, 18 months before Covid-19 hit.

Scone Time quickly became a community connector where seniors could come together with family, friends and local business owners over fresh hot scones loaded with home- made jam and whipped cream.

Suddenly Martin found himself making hundreds of scones a week to meet the demand for his special morning teas held in venues around the Sunshine Coast.

The arrival of the pandemic ground the concept to a temporary halt but now things are getting back into full swing and Martin is sorting his tea cups and refining his recipe.

A New Zealander by birth, Martin said he had always been a keen cook and foodie.

“It started with my grandmother, she was an amazing cook, an amazing baker and every time I went there she would make something different, but unfortunately her recipes went with her,” he says.

“She gave me a cookbook when I was seven, for Christmas. It was the New Zealand Women’s Weekly Cookbook. I kicked mum out of the kitchen and just kept on cooking.”

After completing a chef apprenticeship in his New Zealand home town of Temuka, he came to Australia where he worked on the islands and later opened a cafe in Terrigal on the New South Wales Central Coast.

He then graduated to opening and running cafes in Brisbane where he would regularly network the local traders.

Martin also would travel between Brisbane and the Sunshine Coast where he ran a cooking school, but six years ago the commute became too onerous and he has now settled in Palmwoods.

He is now the ambassador for Food Agribusiness Network and president of Country Noosa.

But it’s his Scone Time that has really captured the imagination, particularly among seniors all over the Coast, although non-seniors are also welcome, of course.

The simple concept involves Martin setting up at a venue – usually a local hall or meeting room.

These often hold memories for guests who may have attended dances or supper clubs there in the past.

Along with volunteers, he sets up tables with vintage tea sets, gets the coffee and tea brewing, and warms up his freshly made scones along with lashings of jam and cream sourced from local farmers.

“The biggest thing for those who attend is the connection,” he says. “There are some amazing stories.

“One guy hadn’t been out for two years after his wife had passed away, and I told him ‘you’ve got to come’.

“He wasn’t on the internet so I said, ‘just come, come with me’ and I put him on a table with a lot of girls – the youngest was 82 – and they brought him into the fold. That’s what I love.

“One 92-year-old lady has missed only one event – because she had to go to the doctor … she comes in on a zimmer frame.”

Volunteers, traders and farmers often join in Scone Time and Martin said he loves the idea and the camaraderie that comes with it and hopes that it will become his legacy,

Despite often making 360 scones a week with his own extra nutritious recipe which includes vanilla, yoghurt and egg, Martin says he never gets tired of them and quite happily scoffs them himself on a regular basis.

As Scone Time winds up again, with between 50 and 120 or more people at any one event, Martin is getting local cafes and bakers on board with his recipe, to help meet the demand.

He hopes to eventually have enough teacups and cutlery at each venue to save all the packing and unpacking.

“I only charge $8 and people can come and eat their bodyweight in jam, cream and scones,” he says. “And I hate waste, so if there is any left over I sell them to people to take home. They love that.”

And when he’s not whipping up the next batch of scones?

“I’ve got an art studio – a pottery wheel and paints – but I’ve been so busy doing scones.  I’m too easily distracted,” he says.

Martin’s next Scone Times will be:

Tickets can be purchased online at trybooking.com/BOUKK  for Caloundra; trybooking.com/BOSXP for Cooroy; or trybooking.com/BNSVE for Glass House.
Alternatively, contact Martin on 0473 902 261 to reserve your space. A Covid-safe plan is in place and volunteers will sign you in on the day.

Couple cruises into retirement
Barry finds his focus on Vietnam