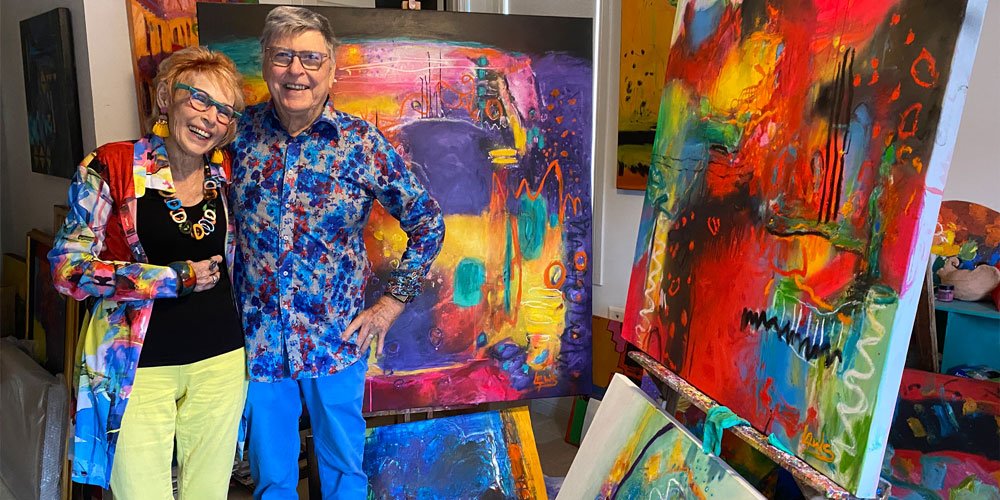 Partners for 30 years, Rex Backhaus-Smith and Judith Laws are still helping each other grow and change even as their amazing works of art do, and there is certainly no sign of slowing down as the years pass.

In fact, they are both more prolific than ever – planning new works and exhibitions as well as more of the travel adventures, once the Covid-19 pandemic calms down.

They have now downsized – well, sort of – to a retirement villa. They compromised with a four-bedroom residence so they could each have an art studio.

Somehow Rex also managed to snaffle the double garage for his enormous acrylic and mixed media works, as well as the upstairs bedroom for his watercolours.

Judith has her colourful studio in one of the downstairs bedrooms.

Studios aside, their home is really one big work of art with paintings they have given each other for special occasions on the walls along with the many sculptures and other craftwork they have created.

Even the bird bath has been delicately covered in mosaic by Judith who loves her colour and who painted the outside dining table and canvas deck chairs with her inspirations.

Judith jokes that she would even paint Rex – literally – if he sat still long enough.

The artist’s eye is everywhere in their eclectic home and while Judith bustles about saying “housework is not on my agenda because there are so many other interesting things to do” everything looks perfectly in place.

The couple, who were both married – Judith with five children and Rex with two – when they met through art 30 years ago, seem to have a synergy that brings out the best in each other and their work.

Already a well-known face on the world art scene, Rex was tutoring while Judith, who had always been creative, was struggling with traditional oil painting lessons in another class.

She had been a fan of Rex’s work and went to all his exhibitions so when he suggested she was more of an abstract artist than a traditionalist, Judith took it on board and found her niche.

“Romance blossomed and we’ve been together since 1990,” Judith says.

Their blended family of seven has now grown into 17 grandchildren around Australia and they are champing at the bit to see them all again.

While Rex was already exhibiting around Australia and overseas, Judith’s first was at Linton Gallery in Toowoomba in 1979 – above a chemist shop – and it went well.

“She’s had 48 solo exhibitions,” says Rex proudly, while admitting he’s lost count of his own.

Mixing with Australia’s art elite from Clifton Pugh, to the Boyds and Frank Hodgkinson, Rex also has been to England to study William Turner.

“I was fairly traditional, but not anymore,” he says. “I did steam trains and old buildings. I was fascinated by light.”

At one point he was also running 100 watercolour painting schools including sessions on ancient architecture all around Australia and while he still has a soft spot for watercolour, he now enjoys painting large dramatic acrylics on canvas, usually featuring his signature Australian native birds.

Judith says her works are nowhere as big as Rex’s but still usually range up to 150cm square.

They both take to the countryside and sketch and take photos, which are only a record of the area – they never paint from the photographs.

Generally, they both work every way and both have also published books. Rex is still working on his now 30-year project – an art book featuring the Greek Islands.

They have travelled extensively around the world, sketching and painting as they go and also have an affinity for Australia’s Outback.

When not painting, they love to go out for coffee and make the most of their retirement village’s facilities with gym and aqua aerobics.

Not many people realise Rex started his career as a primary school teacher, where he began teaching art. While he has no formal training, he did complete a course of applied art at a school in Brisbane.

He resigned from teaching in 1976 to take up painting full time, admitting he was “very brave” but when his first exhibition sold out he realised this was his new life and admitted “they were heady days”. Since then, he’s been selling about 100 works a year.

He also admits to being rather attached to those first works and even resented selling some pieces. “But I soon got used to it,” he says. He still gets feedback from buyers and former students.

In fact, during a visit to GOMA, they were approached by a young man who said “Mr Smith, you taught me art – it was because of you I became an architect.”

It turned out that the young man and his wife were the GOMA architects Kerry and Lindsay Clare.

“We’ve had a carefree life for 30 years,” Rex says, while Judith adds: “When you’re doing stuff you love it makes a big difference.”