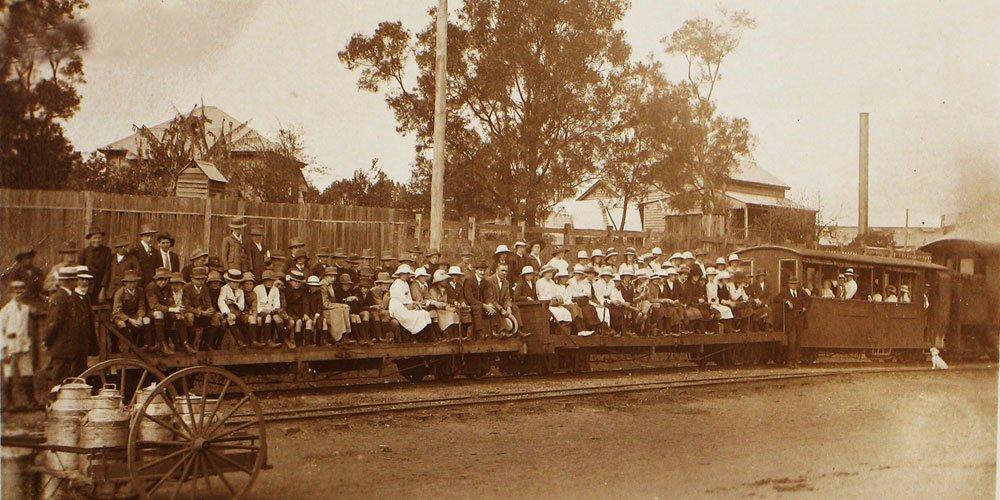 Students of the Nambour Rural School ready for an excursion by train to a nearby school in 1917. Picture courtesy Tony Brady

William was a prophet of socialism, editor of The Worker and founded the New Australia Movement.

In 1893, he took his wife and family, along with his brother John and wife, and sailed from Australia to found a Socialist colony in Paraguay that they called “New Australia”.

It was to be a new settlement built on utopian ideals.

Mary Gilmore, one of our national poets, and more than 200 other sympathisers followed them to Paraguay.

Small-scale agriculture was the lifeblood of the society, with John noting that the production of quality crops required an understanding of the soils and climate, but they barely became self-sufficient.

John’s experience though, would stand him in good stead for a future role.

Despite reports from the Lanes on the success of the colony, after five years it numbered less than 100 people and in 1898, William Lane resigned and went to live in New Zealand.

The colony failed and colonists made their way back to Australia except for a few families whose descendants still call Australia home.  They had suffered great hardship as part of the experiment.

In 1915, John Lane was appointed to Yandina State School where he remained for five years. This was an exciting time for education because in January 1917, Thomas Fisher established the Nambour Rural School to teach a curriculum based on agriculture and provide training for future vocations.

It was the first Rural School in Queensland and over the next three decades, 29 schools followed the Nambour example. At that time, Queensland was an agricultural society and dependent on farmers whose education was important.

John Lane already had a remarkable knowledge of agriculture gained from farming in Paraguay, which he put into practice. The Yandina school garden became a showpiece for the district.

Lane, his wife and children, Ethel, Alice, Eric, Cosme (the name of a second colony founded by his brother in Paraguay), and Hilda were mentioned in an article in The Sunday Mail, on June 27, 1937, for the couple’s golden wedding anniversary.

He and his wife were both born in England and had travelled to Australia when quite young. John Lane trained as a teacher. His first school was Harelmar near Pittsworth, before joining his brother in Paraguay.

During his career with the Department of Public Instruction, Mr Lane was commissioned by the government to compile a syllabus of the dialect of the Wangerriburra Aboriginal tribe whose territory extended from a few miles south of Beenleigh to the border McPherson Range.

It was published in 1913, as Grammar, Vocabulary and Notes of the Wangerriburra Tribe by John Lane from the Report of the Chief Protector of Aborigines. Yugembah Museum at Beenleigh holds their history.

John Lane died in Brisbane in 1946 and is buried in the Tweed Heads cemetery.