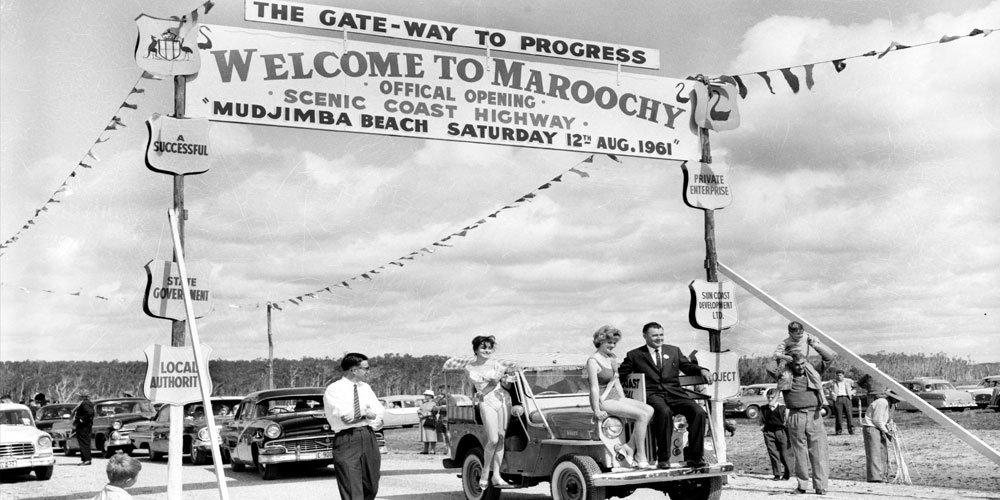 When the coast was still known as the North Coast or Near North Coast in the 1960s, planners talked of a coastal road that could link Caloundra and Noosa.

In the ’50s, many roads were gravel or just narrow strips of bitumen.

Access to Caloundra was by a single road running in and out from Landsborough. Likewise, Maroochydore, was accessed from Nambour. A narrow road wound through scrub.

Coolum access was from Yandina and the road was often partly under water crossing the big swamp. A mail boat service delivered visitors from Yandina to Coolum, while visitors for Maroochydore could take a tram to Cedar Tree, about two miles out of Nambour, and then catch the boat onwards.

Noosa was connected to Eumundi and Cooroy by narrow and winding roads, akin to goat tracks.

As early as 1948 the Near North Coast and Mary Valley Council of Progress Associations agitated for a coastal highway which could open up thousands of acres of unused land for settlement.

In 1954, they proposed an airport but roads and bridges were needed to access the site. These projects developed together. July 13, 1959 marked the beginning of the coast road from north of Coolum to Sunshine Beach. The first sod was turned on the boundary of Noosa and Maroochy Shires.

The road from Caloundra to Noosa was built in sections.

Developer T.M. Burke Pty Ltd was to fund the northern section and in return receive the leasehold of surrounding hundreds of acres while creating urban areas such as Peregian.

Deals were done between councils and developers.

Alfred Grant obtained the lease for the area we know as Kawana, a swampy area of wallum where tea tree, banksia and mangroves grew.  Prior to this, the area had only a few sandy tracks with access by boat along the Mooloolah River.

There were protests from environmentalists against the destruction of the landscape. Hinterland farmers considered their roads were more important than a coastal highway and also voiced objections.

On June 5, 1965, Queensland Premier Frank Nicklin officially opened the Nicklin Way, from Caloundra to Mooloolaba, a distance of 12.5km. This was the first step heralding boom times ahead.

Nicklin had been a Palmwoods pineapple farmer and was elected to parliament in 1932. He served as premier from 1957 to 1968.  One of his priorities was to see the coastal strip developed so it could bring population and employment.

Nicklin’s fellow politician was David Low, the member for Cooroora from 1947 to 1974. He was also Maroochy Shire chairman from 1952 to 1967. His influence and enthusiasm sustained work on both the coast road and the Maroochy Airport.

The David Low Bridge at Bli Bli opened in 1959 and assisted the sugar industry as well as providing a link in the coast road.

The David Low Way extends for 36km to link Maroochydore to Noosa.

The Nicklin Way and the David Low Way make up one coastal road. The alternative is the Sunshine Motorway which opened in 1990, as a toll road.