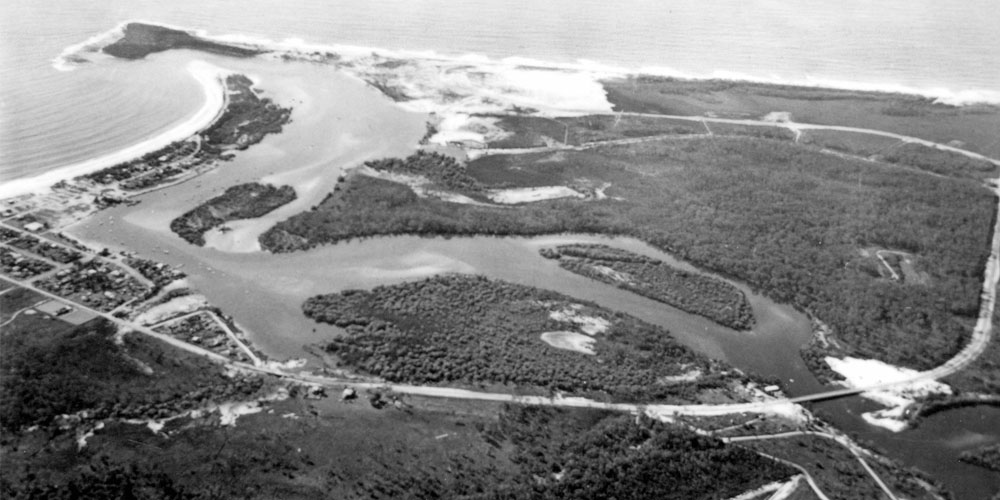 Kawana is an Aboriginal word meaning wildflowers. The name, like others in the area, was chosen by developer, Alfred Grant who obtained the leases for the area.

Before the 1960s, Kawana and the surrounding area was almost inaccessible wallum, sand dunes, mud flats and mangroves – inhospitable to say the least.

To visit the area, brave souls set out by boat and crossed the Mooloolah River or rode horses along the beach following a sandy track north of Lake Currimundi. There was no Minyama Island and no canal development. These were formed by dredging many years later.

The 10 miles of empty ocean beach from Mooloolah Heads to Caloundra Heads were described as  nature’s greatest beauty, with the Pacific Ocean to the east and wildflower plains to the west.

Kathleen Macarthur Conservation Park shows what the bushland that once covered the area looked like. Kathleen and the Wildlife Preservation Society lobbied the government in the 1960s and ’70s to stop the destruction of native plants.

La Balsa Park is named to commemorate the voyage of four men by raft to demonstrate a long-held belief of migration from South America to Australia. McKenzie Bridge is named for Roy and Gwen McKenzie who were fishermen, shop owners and boat builders. The bridge was named the same day as the Nicklin Way in 1965.

The proposal that got it all started was a subdivision put forward by the Alfred Grant development company which had purchased 160 acres of freehold land from Arthur and Cyril Parkyn in 1959.

It was called Kawana, and was approved in May 1960. Alfred Grant advertised the sale of allotments at Buddina Beach from £495 and offered a 10 per cent discount for cash.

The only high land was the headland at Point Cartwright, with two sand dunes and a swamp up to a metre deep keeping the ocean from breaking through to the almost 4000 acres that would become Kawana.

The canals and lakes of Kawana were not so much a lifestyle choice as an effective way to drain the swamp. Sand was dredged to create the canals and fill the land sites.

Some areas were below sea level. Cyclone Wendy in 1972 brought high seas and flooding.

Man-made islands are Mooloolah, Minyama and Kawana and man-made lakes are Parrearra and Kawana.

June 22, 1973, remembered as Wet Wednesday, saw many areas of the Sunshine Coast flooded when 250 mm of rain fell in 24 hours. It was a test for roads including the Nicklin Way.

With the onset of climate change and speculation about rising sea levels, low-lying coastal areas could be inundated.

There have been dramatic increases in Kawana’s population and the much talked-about property values. In the late 1960s, a three-bedroom house would sell for less than $10,000. Many now sell for over a million.

This large urban society now has every facility, from sporting venues and stadiums, to shopping centres and a hospital.

What drew us there in the first place? The simple pleasures of a dip in the sea and a walk on the beach.