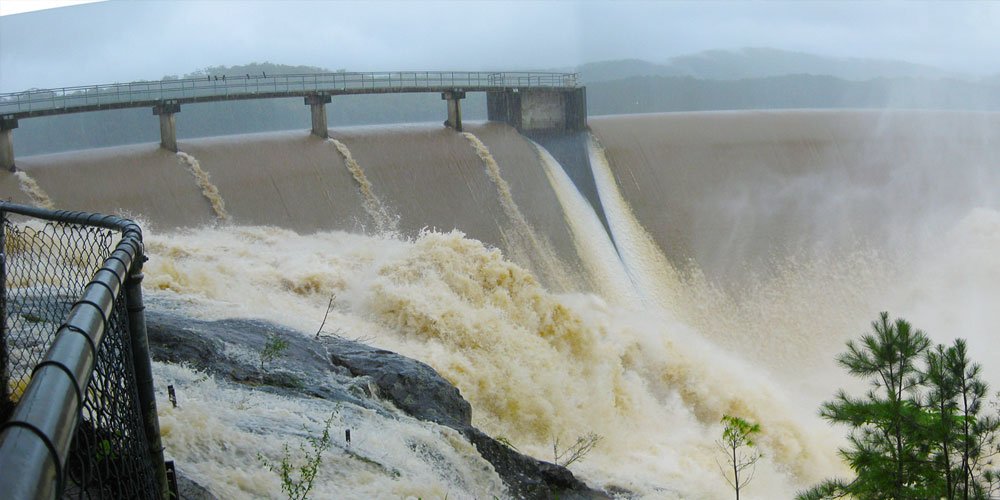 Over a year, about 1400mm of rain may be expected to fall and we can expect this to occur mainly in the summer or autumn months, but that’s not always so.

Queensland’s wettest year on record was 1893, when residents reported continuous heavy rain and strong winds as two cyclones followed each other, dumping more than a year’s rainfall.

The heavy rain began in January and with 2286.4mm in February, the year’s total was 4401 mm. The effects of the resulting flood were widespread and devastating. Rivers spread out over farmlands destroying crops and livestock were lost. Roads were impassable. Rail lines were washed away.

Telegraph poles were knocked over and lines broken so communication was cut.

Timber-getters lost badly when logs from William Pettigrew’s sawmill at Maroochydore were washed out to sea. The steamship Tadorna Radjah known so well to the settlers along the Maroochy River, sank in the flooded Brisbane River.  The S.S. Dicky also went down at that time, a victim of cyclonic winds and rough seas. It gave its name to the beach where its wreck lay for 122 years until 2015.

In 1954, there were two catastrophic cyclones that caused widespread damage. The district received a total of 2097.5mm, with the highest falls in February (601.8mm) and July (414.2mm).

Public buildings were hit with a vengeance.  The community hall at Cooloolabin and the Catholic Church at Cooroy were destroyed. The North Arm hall was blown off its stumps. In Eumundi, the Anglican Church and the School of Arts hall lost sheets of iron from their roofs.

Six months later, in July, a second cyclone struck knocking down any crops that might have survived. Hundreds of acres of cane at Rosemount, Bli Bli and Maroochy River were flattened.

Buildings, almost repaired after the damage in February, were destroyed again in July.

In April 1955, a freakish, tornado-like wind struck Yandina. Roaring like a steam engine, it was said to travel at 130kmh with a 200m-wide path of destruction. Houses and roofs were lost, the Baptist Church was destroyed, and the Methodist Church was blown off its stumps.

The Nambour Chronicle reported that water was 10ft (3m) over the Yandina-Coolum Road and army ducks were called in to rescue several families along the Maroochy River. The district received a total of 2233 mm.

Flood waters rose quickly. Car dealer, Ray Grace, was trapped in the roof of his showroom in Coronation Drive, Nambour, for three hours before being miraculously rescued.

In Maroochydore, the river extended itself and made streets impassable.  River flats were inundated. The Mooloolaba Marina became a tangle of boats. The coastline was heavily eroded, and many caravans were destroyed. Caloundra escaped the worst.

Cyclone Wanda in 1974 and Cyclones Yasi, Marcia and Debbie also stand out.

There is a saying that “nothing is as fickle as the weather.” As the SES says, we need to be prepared.

Neighbourhoods rise from the dunes
When ginger ruled in Buderim