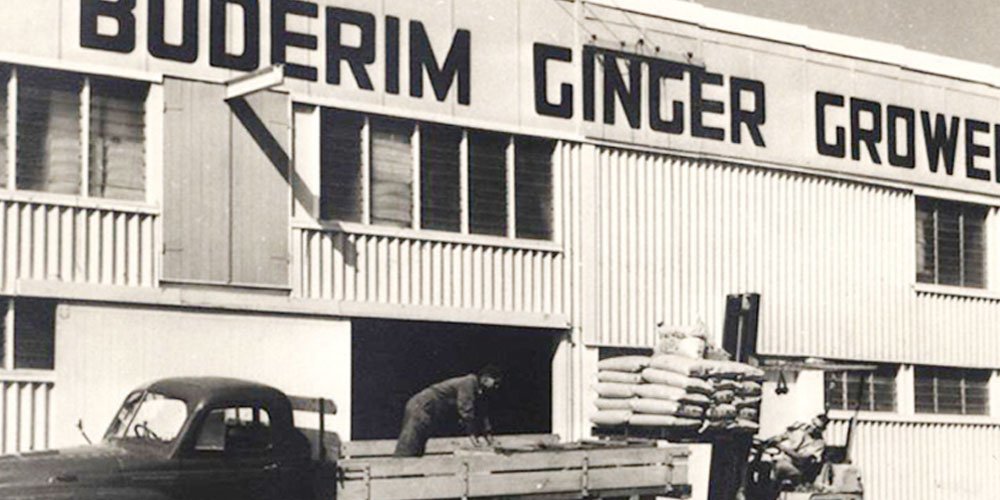 Buderim Ginger Factory, in central Buderim during the 1950s and 1960s.

Maurie Richards built the machinery that sliced and diced the ginger, mixed and cooked the jams, moved ginger around the building and loaded drums on to trucks – he even built a machine to crack macadamia nuts.

A jack of all trades, Maurie kept the machinery operating around the clock.

He first learnt to fix machines on his father’s Mapleton farm. He attended Mapleton primary school and was a boarder at Mrs Bennet’s boarding house while he attended Nambour Rural School, but “not for too long”.

His real interest was machinery, and he honed his education on the job at Nambour sugar mill and at a Palmwoods sawmill.

Buderim in those years was a quiet country town with farms where most of the ginger was grown. The Buderim Ginger Factory functioned 24 hours a day. Local farmers wanting to supplement their income worked the night shift.

Intensive work as women cut and clean the ginger rhizomes by hand.

Nambour accountant Geoff Shrapnel became factory manager and with secretary, Doris Marbech, is credited with its success. There was a staff of 60.

The company joined with Warrys of Maryborough to produce the Merrybud brand.  In season, two to three tons of strawberries might arrive daily. Women worked as sorters.

Cans on conveyor belts received the fresh strawberries and syrup with a colourant. The syrup was made in big steam pans. The cook,  Mick Mead, was, Maurie says, the best jam maker. About 15,000 tons of sugar was used each year.

Local police arrived almost daily saying there had been complaints about trucks blocking the street outside the factory, while tourist buses delivered, at peak times, 1000 visitors a day.

Ginger is seasonal and available for only two months of the year, so it needed to be stored. The crop arrived in bags by trailer or truck. It was weighed and washed and put into 55 concrete vats, each holding 12 tons.

The factory made crystallised ginger, ginger in syrup, ginger marmalade and diced ginger. One batch would be 200 cans. About 1000 cans were produced daily.

Maurie built a slicer and sliced ginger became a best seller. Products were exported to other manufacturers in 44 gallon drums. A semitrailer left the factory each day with a load of drums.

In the 1970s, it became obvious to all that more space was needed in the building and for the trucks and tourist buses. Land at Yandina was acquired and the new factory was officially opened by premier Joh Bjelke-Petersen in 1980.

Maurie is proud of his heritage. His ancestors, two Smith brothers, were the first selectors of Mapleton. The family of his wife, Edna Duffield, were farmers at Palmwoods. They married on November 26, 1949 in the Buderim Methodist Church.

He believes their wedding reception was the first at the Buderim Hall. They built their first house themselves in Burnett Street and grew their own produce as there were few shops.

“The talkies” were held in the Buderim Hall on Saturday nights, the highlight of the week for locals. When the operator decided to close, Maurie, as the youngest and most agile member of the hall committee, offered to run the Saturday night shows.  He and Edna did this without payment from 1955 to 1962. The usherettes and ticket sellers were also unpaid while other volunteers were continually fixing the canvas chairs. Profits went to the hall.

Maurie retired from the ginger factory when it relocated to Yandina and the pungent whiff of ginger no longer pervaded the streets of Buderim.