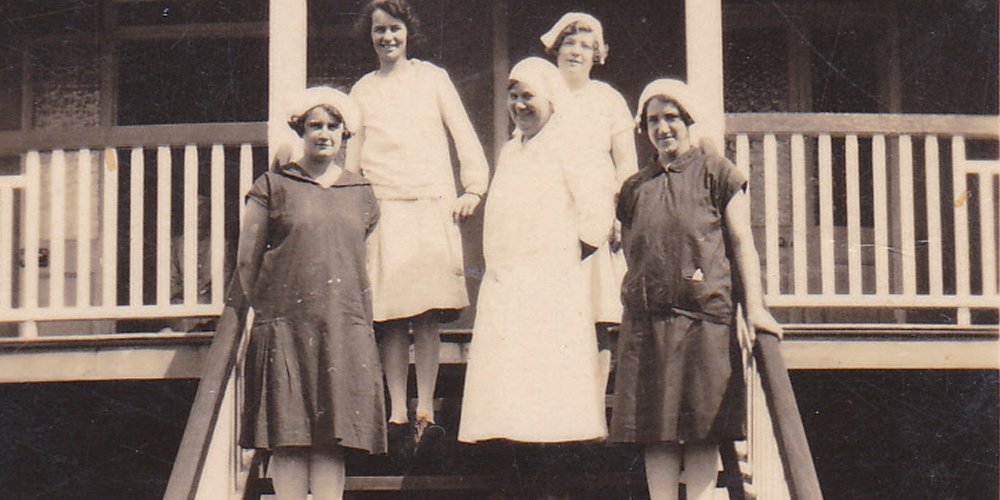 Diphtheria is highly contagious and was once the No.1 killer of young children. It is transmitted by a germ that enters the body through the mouth or nose.

Authorities knew that the disease could be distributed by carriers who were not susceptible to it and the Department of Health had full legal authority to enforce the isolation of a child or person who may have been a carrier. The community cooperated.

In 1927, a new hospital, the Maroochy District Hospital, was being built in Nambour. The council decided to put all the carriers in isolation at the unfinished hospital and referred to it as the Isolation Hospital. The otherwise unoccupied administrative wing and maternity section were used as well. The council said there was a saving on not sending the carriers to Wattlebrae Isolation Hospital in Brisbane.

Doctors visited schools and took throat swabs when a case of diphtheria occurred. When two cases of the disease were detected at Bli Bli State School, swabs were taken of the 70 pupils.

From a thousand district children tested, between 90 and 100 carriers were detected.  Some belonged to other shires, and 88 were in Maroochy.

Alma Bade was just 19 and one of the three nurses assisting Matron Mitchell in the unfinished hospital. She recalled:

“Electricity was not connected so Aladdin kerosene lamps and carbide gas were used for lighting. We used a kerosene lantern for our rounds.

“I remember the cook preparing huge topside roasts and piles of roast vegetables in the big ovens of the combustion stove and the cases of fruit, vegetables and groceries brought in daily.

“All the carriers were quite well and had good appetites. Good nourishment was part of the treatment.

“There were no floor coverings just bare boards and I remember helping to scrub the kitchen. Our work started at 6.30am and finished any time from 8pm to 10pm. I went home once a week for about two hours as we were in strict isolation and before leaving had an antiseptic bath, a complete change of clothes and a gargle.

No visitors were allowed inside the barbed wire fence, which was not put there intentionally, but the hospital was built in a cow paddock. Parents and friends visiting could see and talk to the carriers who stood about 20ft inside the fence and a nurse would collect and deliver any parcels etc.

“A northern verandah was enclosed with tarpaulins where long trestle tables and forms served as the dining-room.

“Matron Mitchell was the first organiser but she had to return to Brisbane after a few weeks and Sister Kate Harden replaced her. The three recruit nurses were Maude Low (daughter of shire chairman, J.T. Lowe), Eve McFarlane and myself, Alma Bade.

“We had two ladies as cook/laundresses and they were fantastic women, Mrs Nelson and Mrs Baker. Harry Nelson was the yardman. He had a wagon and two horses for the removal of garbage. Each nurse took their turn in helping in the kitchen as well as treating the patients. The treatment consisted of nasal douches and throat gargles. The antiseptic used was Solyptol. 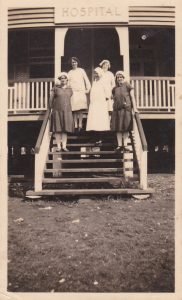 “We would measure out the required amount from gallon tins and dilute with warm water carried from the kitchen and poured into douche cans hung above the sink in the washroom.

“The carriers formed a line and all were treated to the nasal douche. After all this, everyone received a cup of Solyptol solution and had their gargle. The gargle was twice a day and the nasal douche once a day. Every second day Dr Penny would arrive at 8am and proceed to swab the carriers. The swabs were placed in a small container phial, sealed, labelled and sent to Brisbane to be tested.

“Each patient was required to have three negative swabs consecutively to be able to be discharged. Sadly, often there were two negative and then a positive and when that happened, we had some comforting to do.

“Dr Penny was a kind, gracious gentleman. The children were very good and but for a little homesickness and a case of boils (which was my special care) we had little trouble caring for them.

“Doctor and Matron decided after about three months treatment to operate on three of our most stubborn carriers, so a theatre was constructed and I think it was Dr Malaher who was called in to be anaesthetist.  Well our three patients got over this and one was soon clear having got three negative swabs. The other two were with us to the last. In mid-December the hospital closed, the diphtheria epidemic was over, and the last two were sent to Brisbane.”

Alma also recalled a visit to Kenilworth State School when she, along with the doctor and matron crammed into an old Overland. It was a long, tiring journey over unsealed roads. They took a picnic lunch to have along the way.

Apart from the swabbing and the rough roads it was a great day out!