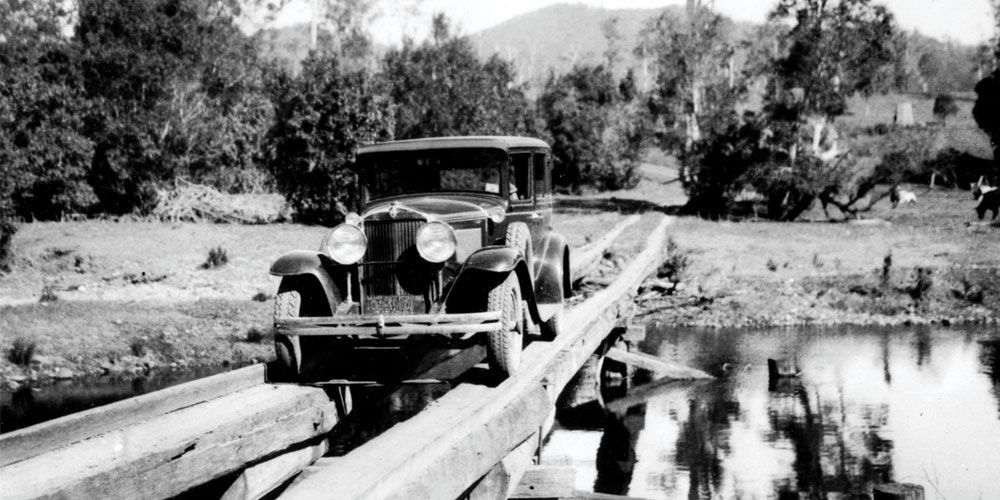 Car crossing a spider bridge over the Obi Obi Creek in 1935.

Kenilworth Museum has evidence of an early method of crossing Coolabine Creek – two logs were bolted together and placed in the creek bed (upstream from the current bridge).

These logs stemmed some of the flow and vehicles were able to cross by driving down to the creek bed and up the far bank.

In 1951, Arthur Tanner of Kenilworth recalled that necessity was the mother of invention.  With the advent of motor vehicles in the 1920s when the district had no bridges, two halves of logs were laid across boggy gullies for a vehicle to cross.

This led to what became known as spider bridges, a lifeline for farmers in the rich Kenilworth dairying and agricultural district. Without them, the farmers and their produce were stranded.

In heavy rains and floods, creeks would become torrents. Debris and fallen trees crashed into spider bridges, in spite of the strong buttresses to keep the bridge safe and ward off damage.  Farmers made necessary repairs with the same solid, rough-hewn timber used in construction which came from nearby farms.

Drivers and passengers related the scary experience of crossing a spider bridge. Drivers lined up the running boards. Guard rails, centre runners and decking were sometimes added extras, almost luxuries.  Passengers often preferred to walk across. Prayers and curses might have been heard.

In 1928, Maroochy Shire Council agreed to fund three spider bridges over Obi Obi Creek, an economical proposition, as three could be built for the price of one bridge.

Previously, a party of state and local government officials, on an inspection tour of “the back country” (Kenilworth) before providing funding for bridges and roads, experienced first-hand the difficulties of driving across a spider bridge. 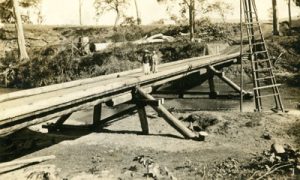 Coolabine Creek spider bridge, 1936. It was replaced by a wooden bridge in 1939 and the high-level concrete Houston Bridge in 1964.

The first two cars negotiated the crossing but the third, with lower mudguards, wedged against the guard rail.

Passengers, including the only two ladies on the tour, were asked to disembark while the running boards were packed to increase their height, so allowing the vehicle to pass.

Careful and exact driving was necessary with no room for error as the drop to the creek bed was about three metres. Those who walked across found that great care and balance was required.

In 1929, the Minister for Agriculture and Stock, Mr H. F. Walker, visited the area to open the three new spider bridges and said that their cost was £300 of which £210 had been raised by donations and voluntary labour of farmers.

He praised the “self-help principle of farmers”.

By the 1930s, the council was having to consider wooden bridges on piles to replace spider bridges. These, in turn, have beebn replaced by concrete bridges.

In 2020, few wooden bridges remain in the district –  and certainly no spider bridges.