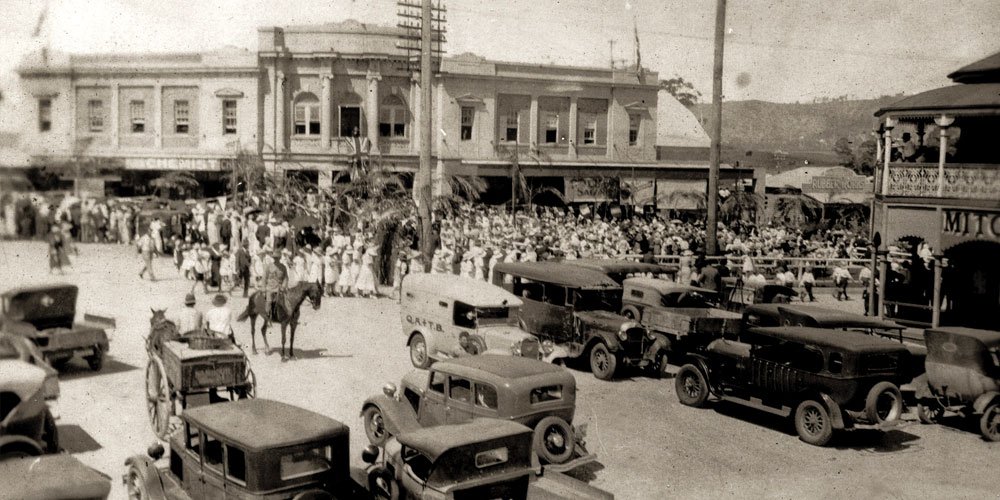 The old Nambour Civic Hall which contained the Maroochy Shire Council Chambers. The building was opened in 1931 and demolished in 1989. (Courtesy Sunshine Coast Council Heritage Library)

Local government on the Sunshine Coast began in 1879 when the Queensland State Government of the Divisional Boards Act was passed.

The purpose was to get local residents to fund their own roads and bridges. At that time roads were dreadful because the timbergetters’ wagons and snigging logs cut them to pieces.

Two very large areas – Widgee and Caboolture Divisional Boards – were established. The Widgee Divisional Board extended from north of Eumundi to north of Gympie and included a strip along the coast from Peregian to the Maroochy River mouth.

Caboolture Divisional Board extended from north of Eumundi to Kedron Brook in Brisbane.

In 1903, the Maroochy Shire Council was formed when the 1902 Local Authorities Act was passed. The Nambour Chronicle also began in 1903.

“At last local government had a critic,” it was said as the new newspaper reported on council meetings and was a watch dog.

The Widgee Divisional Board had been given the status of a shire council in 1902. Noosa Shire was cut away from Widgee Shire and held its first meeting in 1910. Two years later, Landsborough Shire Council was formed. It became became Caloundra City Council in  1987.

Councils on the north coast of Brisbane know all about amalgamations and de-amalgamations. No change has ever been made without a fight, petitions, threats, grief and plans for even more changes.

In March 2008, Noosa Shire, Maroochy Shire and Caloundra City amalgamated and elections were held for the new Sunshine Coast Regional Council. Many believed there were benefits for the region. But not everyone.

In 2014, Noosa Shire de-amalgamated. Mark Jameison and Noel Playford presented strong arguments for and against but Noosa ratepayers voted to be separated from the Sunshine Coast Regional Council and the word “regional” has since been dropped.

This year, new divisional boundaries in the Sunshine Coast Council region again have left ratepayers with much to debate.

A representative from each of the six coastal divisions and four hinterland divisions and the mayor make up the 11 members of our local governing body for the next four years.

Whatever happens, we can always be sure of surprises, challenges and controversies when it comes to any government and local government always has more than its share.

A final word: With thoughts of service to the community, councillors represented their electors without pay in the early days of local government.

Later, a minimal fee was offered to defray costs for councillors. In the 1980s, there was a frequent cry of “pay peanuts and get monkeys” – and local councillor salaries were brought in line as a percentage of state parliamentary pay packets.