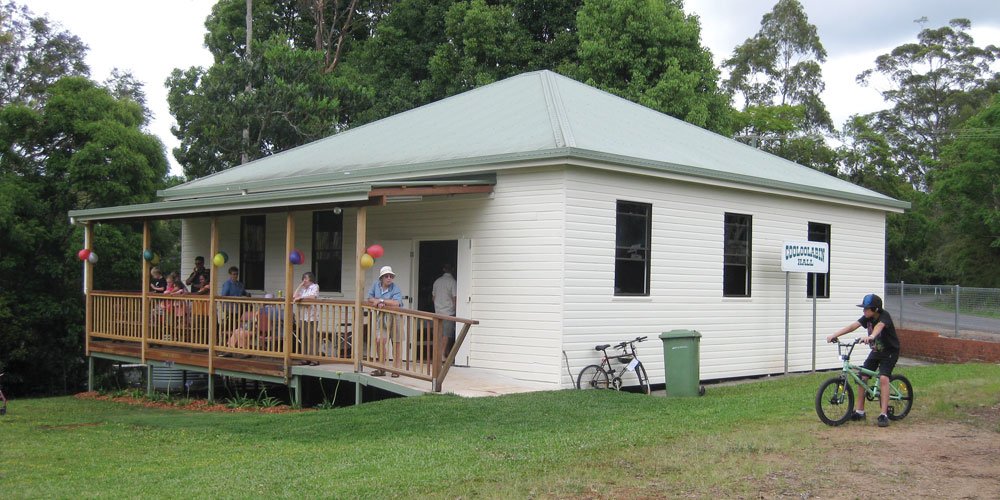 Despite the spooky reports, Cooloolabin Community Hall, once known as the Cooloolabin School of Arts, is still a gathering place for locals.

During the past 80 years, there have been various reports of mysterious lights – spook lights – in the Cooloolabin area.

Unfortunately, those who saw the lights in more recent times wish to remain anonymous and no photo is available.

“For some months past Cooloolabin residents have been greatly perturbed at the frequent appearance after nightfall of a mysterious-looking light on the top of a rise in an unfrequented spot about 300 yards from the School of Arts.

“The illumination is not visible every night, but when it does show out, is early in the evening and steadily moving to and fro not unlike someone walking about with a hurricane lantern; it is visible in this fashion until towards morning, when it disappears.

“Residents on several occasions have visited the place when the light has been visible in an endeavour to probe the mystery but without success as it disappears at their approach, to shine out again when they retire from the scene. “The theory that the variation in the darkness of the evenings may have something to do with the phenomenon, is advanced by several residents, but this idea is discounted by the fact that it is in any sort of night, whether it could be raining or lit up by the rays of the moon.

“A big party is now being organised in an endeavour to probe the affair, which has caused the loss of more than one night’s sleep to more timid residents.”

A few weeks later, on February 19, the Nambour Chronicle, again reported on the mysterious lights:

“The origin of the mysterious light which has been appearing at intervals at Cooloolabin was solved in a peculiar and rather amusing way recently.

“It appears the illumination shone as usual on the night in question when a resident armed with a military rifle aimed at it with very satisfactory results to the lamp but not to the owner, who was engaged in feeding his pigs on his farm which is situated on another elevation beyond the rise where the light appeared.

“It is not known yet who got the biggest fright – the wielder of the rifle or the owner of the lamp or the pigs.”

In the 1980s, former resident Les Ivins recalled events from the 1920s.

“From the hall a light could be seen on a nearby hill at different times and everyone would rush to see it. ‘Oh the spook light is out’, they would say.”

Different theories were put forward and some even tried to find it.  Les believed it was a light reflected from a train engine being turned at Yandina. In the 1980s, he went back to the hall to try to see it again but large camphor laurels blocked his view.

When the story was aired on local ABC, a man from Conondale rang the radio station to say he had seen such lights in the Conondale area. Unfortunately, he did not leave his name or address or take a photograph.

Advice is to be on the lookout. You never know.

Audienne Blyth is a member of the Nambour and District Historical Museum at 18 Mitchell St, Nambour, open Wednesday to Saturday 1pm-4pm. All welcome.