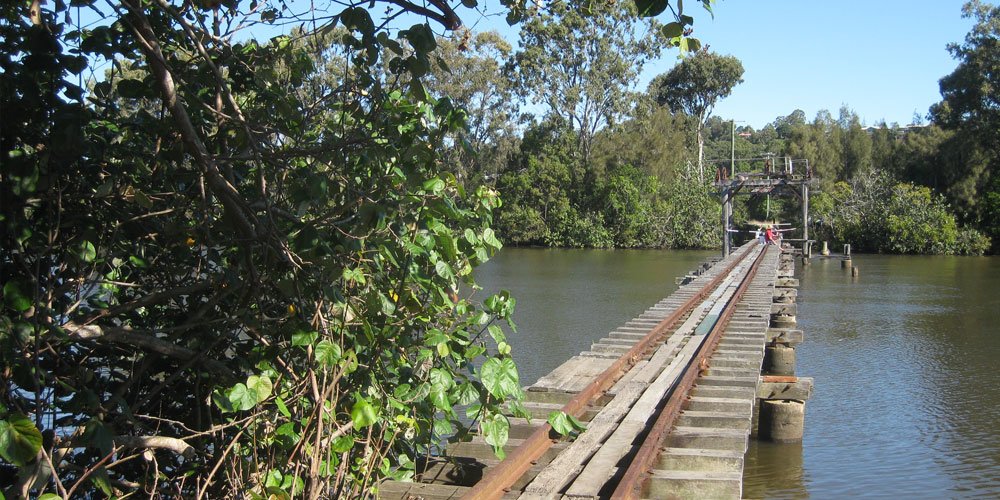 The lift bridge was used from 1921 until the Moreton Sugar Mill in Nambour closed in 2003.

Production of sugar was the district’s most important industry during these years.

The first tram lines were established when the mill began crushing in 1897 and by mid-1921, a lift bridge was opened over the Maroochy River. Before then, a lift-up bridge had been built over Petrie Creek in 1917.

The lift bridge over the Maroochy River was level with the surrounding cane fields but had a movable span built between two towers with pulleys and counterweights to raise the span 7.92m and provided 5.33m for boats to pass. The link was vital for farmers to get their cane to the mill.

In 1922, the tramline was extended to Coolum and officially opened with much fanfare in 1923.

It not only brought cane to the mill but also attracted passengers. Special train excursions from Brisbane brought visitors to Nambour. They then travelled by tram through the canefields to Coolum, which began to develop as a holiday centre.

A pioneering river resident recalled those days when her family would wait at the lift bridge to catch the cane tram to Coolum on Sundays:

“There was usually quite a crowd from Nambour already on when we joined. Some of the adults had to stand all the way on the one-hour journey to Coolum. 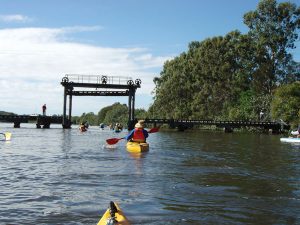 “The tram tracks had been laid to Coolum only by 1923 and in those early stages of passenger travel, planks were placed longwise on the cane wagons for people to sit back-to-back.

“By the 1930s, we could travel in open passenger carriages. No one ever fell off; seat belts were unheard of.  Nambour to Coolum was two shillings per adult; Maroochy River to Coolum was one shilling and children travelled free.”

Coulson’s mail boat, later Duffield & Gilby’s, delivered mail, supplies and household goods to about 60 jetties along the river so the boat needed the span to be lifted daily.

The driver, Bill Barton, had a bullock’s horn which he blew impatiently when approaching the bridge as a warning to raise the lift span to let the school boat through. He was known as Steamboat Bill.

On a still morning, the sound of the bullock horn could be heard over one kilometre away. If the lift span of the bridge was still down on the approach of the boat, he would give the mill employee a longer blast.

When the Moreton Sugar Mill closed in 2003, the cane tram network also closed and the lift bridge was no needed in the transport of cane.

In June this year, Abco Commercial Diving removed the piles of the lift bridge. The structure could not be saved and had to be removed because it was a danger.

Four piles needed to be de-sleeved, the concrete cut and a “window” made in the river bed to remove the rest. The components have been placed in storage pending a decision on the future of the bridge.

It is believed the Maroochy River lift bridge was the last of its kind in Queensland.