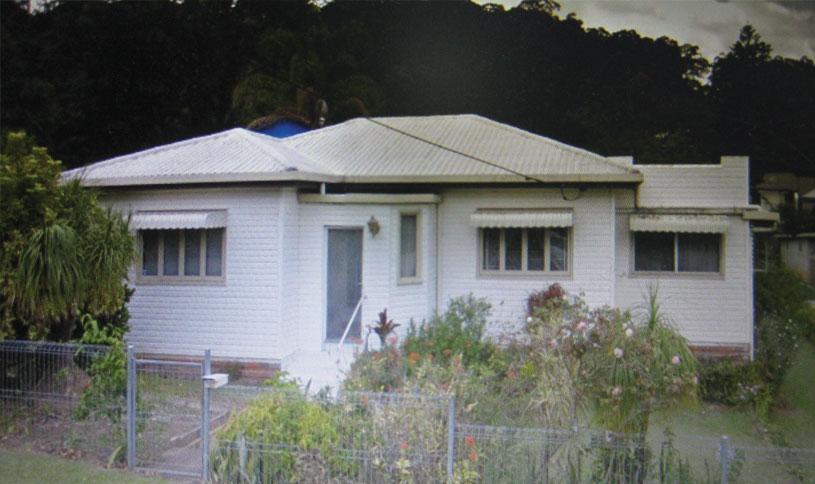 Image: A house of the 1970s photographed by Frank Corley, and still the same in 2019. Possibly one third of the houses have been demolished or very much changed.

Frank and Eunice Corley owned a photography business from the late 1960s to the mid-1970s. They are believed to have taken more than  250,000 photographs of houses throughout southeast Queensland, from Beenleigh to Bundaberg,  and to have photographed almost every house in Brisbane.

Frank travelled around in his Cadillac and photographed houses from the driver’s seat, steering with his knees and holding the camera out the window.

The Leica camera, ancient by modern standards, had to be reloaded with a new film every 36 snaps. Eunice would follow in a van and develop the films.

Frank would then send his salesmen out to the areas he had photographed to sell the photos. Sometimes a calendar was added and sometimes they were made into postcards with a greeting.

A team of conservationists has worked on the photos which were, in some cases, fused together.

The Annerley-Stephens History Group (named to include the suburbs within the former Stephens Shire Council) has identified many of the houses in their area.

Vice-president Denis Peel said many volunteers had been involved during the past four years and it had become very much a community engagement tool.

“Photos, apart from the first couple in each spool of film, have been identified but many have not, so we have been walking the streets looking for the houses,” he said.

“Our interest was that if we located the houses, people could tell us some of the history of the house and the area,” Mr Peel said.

“It has been fantastic. We have got up to 100 people coming along to look at the photos and see what they can identify. We have collected and compiled the stories and photos which refer to not only the area’s history but also its families.”

In the case of the Hubner family, for example, three branches of the family have reconnected through the project after a couple of generations.

If your house or your parents’ house, was around in the 1960s or 1970s, it may have been photographed by Frank.

Houses can also be viewed from a list of other towns including Maryborough, Bundaberg, Ipswich, Killarney, Toowoomba, Gympie, Redcliffe and Nambour.

There are more than 60,000 images of the houses online that the State Library would like the public to identify and add a story of what life was like at that time.

The Corley collection can be found at  explorer.corley.slq.qld.gov.au

Some stories have already been added and these give information such as how and when the house was built, who lived there, where the children played, the household pets, the washing line, the little outhouse down the back and how the family coped day to day.

The photographs do not discriminate, ranging from the grand houses on high blocks with ornate decoration to the ordinary little weatherboard cottages on low blocks.

There was no warning to homeowners to take in the washing or tidy the garden.

A notable feature is that the doors and windows could all be seen wide open. Fences were nonexistent or very low with dogs nearby accidentally photographed.

Sometimes, surprised owners are seen sitting on the front steps. This is “how we were” in the 1960s and 1970s.

The Corley collection is a wonderful record of the social and cultural changes in our lives as seen through the houses where we lived.

Visitors are welcome to see the exhibition at the State Library of Queensland, Cultural Centre, South Brisbane.  Home: A suburban obsession runs July 14. Entry is free.

If you have a story to tell about the Annerley area, email annerleystephens historygroupin@gmail.com