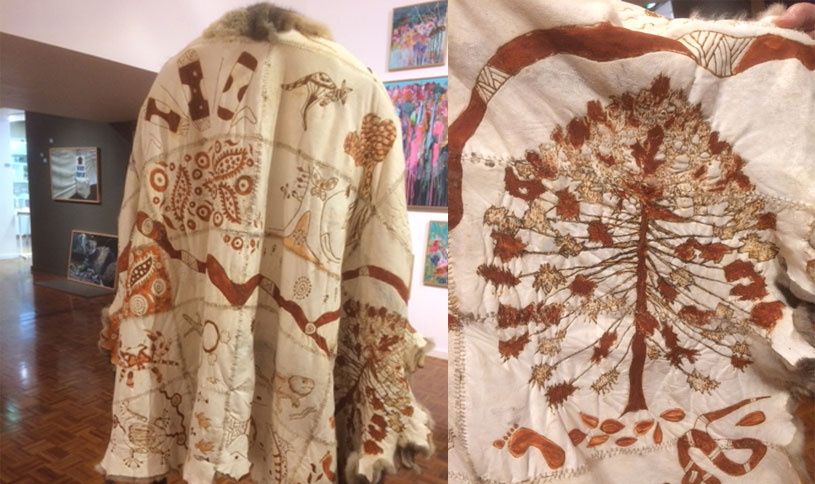 Melinda Serico, one of the Kabi Kabi artists who worked on making the replica cloak described how the cloaks were originally made.

Untanned possum skins were sewn together with kangaroo sinew and the inside decorated with designs.

Various museums throughout the world have an original cloak. The Smithsonian Museum in New York has one collected from New South Wales c. 1840.

With the incursions of European settlement much Aboriginal culture was lost. Possum skin cloaks became a rarity.

In 1814 Governor Macquarie, perhaps as a benevolent and civilising gesture, began a blanket distribution to Aborigines as an annual event on Queen Victoria’s birthday, May 24. This distribution lasted for about the next 100 years.

The quality was shoddy and believed not to last long. Lists were made of those receiving the blankets and so the government had a way of keeping check on how many Aborigines were surviving. It was generally believed the race would die out. European diseases were fatal to them.

The traditionally used possum or kangaroo skin cloaks were waterproof: the government blankets remained damp and were blamed by some for causing respiratory diseases among Aborigines.

A report in The Queenslander, 19 May, 1866 described an Aboriginal gathering to receive blankets: On Monday morning the annual distribution of blankets to the blacks of the Brisbane district took place. It is customary to distribute the blankets on the Queen’s Birthday, but as the Brisbane races commence on that day the authorities determined to do so earlier this year.

About 170 blankets were distributed to portions of the Breakfast Creek, Bulimba, Mooloolah, and Pine River tribes. There were many more women present than men, and all received the blankets with great glee; the pickaninnies especially seemed highly delighted. After the distribution three cheers were given for the Queen and three for Lady Bowen. Two kings of the blacks were present and partook of the bounty provided by Her Majesty without any feelings of delicacy. Last year not more than fifty blankets were distributed, for the blacks had committed some offences about that time and were afraid to venture into town.

A good many blankets remain on hand which will be distributed among the blacks not already provided with them.

By the 1880s Aboriginal groups were reduced to small numbers. Larger groups mentioned in the 1860s and 1870s had dramatically declined.

In 1880, James Low, postmaster and hotelkeeper of Yandina sent in a list of 25 names for blankets. Brisbane Sawmiller William Pettigrew transported bales of blankets to Maroochydore for distribution though no more than 20 each year. By the 1900s any record is hard to find of blanket distribution on the Sunshine Coast.

Note: Brush-tailed possums are protected in Australia. However, in New Zealand they are a nuisance and possum skins are readily available and were sourced for the replica cloak at the Noosa Regional Gallery.

Audienne Blyth is a member of the Nambour Historical Museum, open Wednesday to Saturday 1pm-4pm .