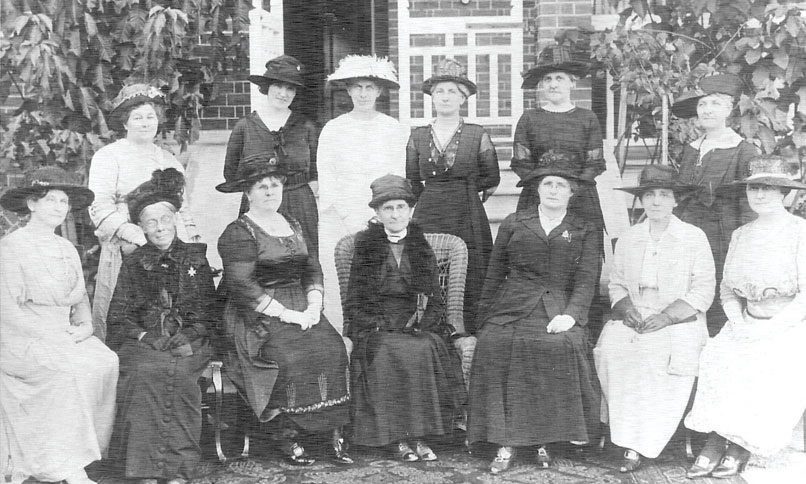 Many confined women who were treated by a doctor succumbed to infection introduced by the doctor himself who did not practise strict hygiene; often moving from a cadaver, to an infected patient and on to the labouring mother without washing his hands.

Delivery by a midwife or family member was often a safer option.

Infants succumbed to fevers, malnutrition and disease before their first birthday. Older children suffered from the same fevers and diseases exacerbated by dysentery and accidents.

Until the age of five childhood ailments were treated by their mothers who had little or no nursing experience. Not until after the age of five were they not eligible to be admitted to hospitals and were then nursed among adults.

At the furthest extent of the empire the wives of four colonial governors and one passionate mother began the work of establishing professional medical care for mothers and children.

The Countess Diamantina di Roma, Lady Bowen, wife of the first Governor of Queensland, resided in the state from 1859 until 1868 and during this time surrounded herself with women whose husbands were influential.

Through her efforts the first lying-in hospital in the new state was established in her name. This hospital for the confinement of women served the community until the construction of the Women’s Maternity Hospital in the late 1930s. In addition, she supported the development of the Diamantina Orphanage.

Lady May Lamington [c1890] was most instrumental in establishing the Lady Lamington Hospital which treated women’s diseases. Lady May was personally interested in nursing and often claimed that had she not married then she would have taken up the profession of nursing.

By the first decade of the 20th century medical support for mothers became a topic for the press through the publication The Queenslander.

Wife of the then Governor Lady Chelmsford, herself a mother together with Mrs Kidston, wife of the Premier chaired a public meeting to air this problem. With the support of several women’s organisations, such as the WCT and QWEL, and influential and outspoken doctors, the Queensland Government of 1917/18 funded the establishment of maternal and child welfare clinics. The qualified nurses who staffed these clinics advised mothers on the care and feeding of their babies.

In 1906 the president of the Qld Branch of the BMA, Dr Wilton Love, had stated that if the infant mortality rate “had occurred to the same extent within flocks and herds then action would be taken at the highest level”.

The efforts of Mary McConnel [1824/1910] the wife of David McConnel who settled Cressbrookin in the Brisbane Valley and the women who assisted her resulted in the establishment of the first hospital specifically for children. Initially situated in a small cottage in Leichardt Street, in 1878, the hospital was staffed by a nurse selected my Mary’s brother a doctor practising in Scotland, Miss Hellicar.

She was assisted for a short time by two young women, one of whom died and the other married shortly after their arrival in Queensland.

By 1883 the hospital was overcrowded, and with the assistance of the Hospitals Act, land at Bowen Hills [Herston] was provided and a children’s hospital built, furnished and staffed under the management of the hospital committee.

Mary was honoured by the naming of the McConnel Ward and she remained patron of the hospital until her death in London in 1910.

The hospital remained under committee management until c1928 when a new Government Act took over the management and financing of all hospitals in the Brisbane and South Coast area.

The hospital treated children until its recent closure and removal of treatment to a new facility in South Brisbane. At its inception and opening the new children’s hospital was named for a prominent Queensland doctor who many mothers knew for her sound advice, written in the newspaper columns under the name “Medical Mother”. Lady Phyllis Cilento was a working mother and it is unfortunate that the naming of the hospital is under review.

In New Zealand in 1907 at a meeting in Dunedin, Dr Truby King brought to the notice of the public the poor treatment of children. His most influential supporter was Lady Victoria Plunkett [1873/1968] wife of the then Governor of New Zealand. A Society for the Protection of the Health of Women and Children was formed and became known as the Plunkett Society. Nurses trained by the society promoted a more healthy and responsive way of rearing infants.

With better knowledge and medical treatment, no longer just women’s business, the maternal and child mortality rate has thankfully sunk to a rate once unimagined.

Diana Hacker is archivist for the Queensland Women’s Historical Association based at Miegunyah in Bowen Hills. Tours are available. Visit miegunyah.org

Neighbourhood photos of your youth