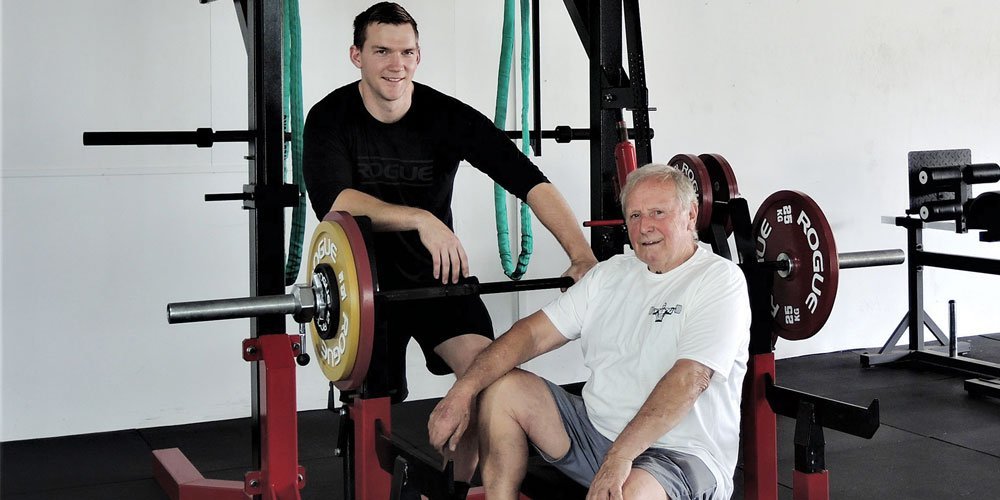 John Dellow in the gym with his strength coach Peter Cox

John Dellow has set himself a goal to beat the world record in the over 75 age group for bench pressing. And with his credentials, there’s every chance he will do it.

“In powerlifting there are squats and deadlifts as well. I don’t do these because of some previous back problems,” he says.

“I only do the bench press which is all shoulders and arms and chest.”

John will need to lift 110kg. He’s currently doing this in his training sessions.

He has been working with strength coach Peter Cox three times a week in preparation for the Adelaide games but it’s not just about succeeding with the the lift. To be recognised as a world record, there needs to be three world-record officials in attendance. John is philosophical.

“If these officials are not present, I will find another event next year to compete for the world record again,” he says.

John was diagnosed with leukaemia in 2004. This, and the fact that he was retired and had more time, led him to join a gym.

“I thought I’d keep myself reasonably active. At that stage I was just joining general exercises not powerlifting,” he says.

He entered his first powerlifting competition at the age of 72 and lifted 120kg. This was at the Commonwealth Powerlifting Championships in New Zealand in 2013.
He won the over 70s age group with a lift of 120kg.

On the international scene, John lifted 127.5kg to claim the bronze medal in the World Powerlifting Championships in South Africa in 2016.

It’s not just about winning though. John enjoys the atmosphere and comradeship of the gym and and picking up tips from other members.

He now has his own strength coach for the first time.

Peter gives him new techniques and mixes up the training, so his muscles work better overall and relishes the privilege of working with John.

“It’s pretty awe-inspiring to see someone at John’s age lifting those weights,” he says.

“He has achieved this in a short number of years.”

Peter finds powerlifting and strength training are becoming increasingly popular among seniors who want to maintain muscle mass, build bone density and stay flexible.
Being stronger improves balance and co-ordination and reduces the risk of falls,.

And training can build confidence too.

“When you know you have a strong enough body for any activity outside the gym, it’s a great feeling. That’s typically why people train,” he says.

“You can see from John’s experience that you can get very strong and healthy by training correctly.

“The key is to have the right technique and good supervision.”

With his 80th birthday looming, John is not slowing down, but rather, setting himself new goals.

It’s a whisky business
Magnificent men in their rowing machines