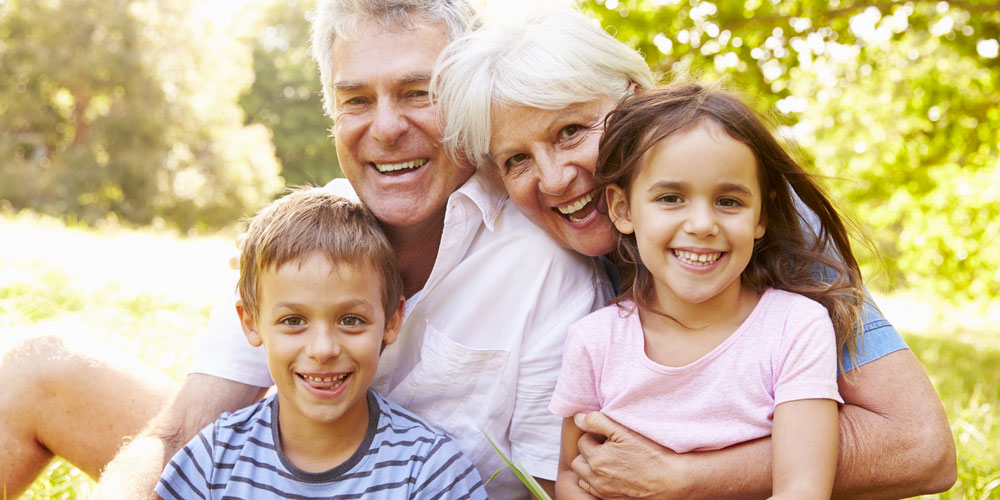 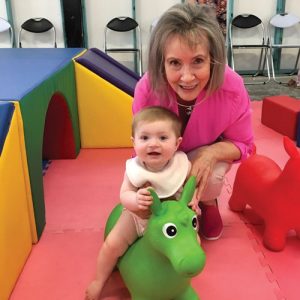 ON my morning walk the other day I found a Christmas beetle flailing about under a lamp post and I have to admit I was pretty excited.

I picked it up carefully and took it home in a tissue and transferred it to a little plastic box.

My two-year-old grandson Jax was due to call in and I knew he would love to see it, touch it and then let it go in the garden.

He was nearly as excited as me when he saw it – exploring the word Christmas beetle with his newfound command of language and letting its sticky feet crawl along his little hand.

Somewhere between being a late-starter Mum and the arrival of grandchildren, the world and work overtook that sense of wonder and now, being a Grandma of three – Jax, Lily, 3, and Eva, 8 months – I have it back again.

That’s what grandchildren do. They restore that world of fun and wonderment.

Whether it’s a swing in the playground, a splash at the beach, going to their first dance concert, catching their first fish or feeding the ducks, there is such a joy in having that little hand holding yours while urging “Grandma” to come and see.

Even a coloured leaf, a stone or a worm is a source of amazement and the smiles and giggles light up your day.

What they especially like – and so do I – is that Grandma has the time and patience to do things just that little bit more slowly.

A stroll can turn into fact-finding mission with every ant, fallen branch, lump of bark, and puddle, worth examining in minute detail. Even a drainpipe grate with water in the bottom has to have a stone thrown in and closely surveyed for possible fish. Watching their individual personalities and imaginations develop is so rewarding. Shy Lily has become a dancer. She’s also keen on swimming, superheroes and Doctor Who and can imitate Spiderman like a pro.

Jax is fishing mad and can name all the species his Dad catches, from spangled emperor to Moses perch. He can identify them and is already handy at catching them himself.

Any stick or pole becomes a fishing rod and anything with a rope becomes an instant crabpot. I’m instructed to sit on his “boat” bed and help reel them in.

He’s also keen on footy, knows most of the Broncos’ names and was overwhelmed and uncharacteristically shy when he met his idol Matt Gillett.

Little Eva, despite being born with a cleft lip and palate, has proved brave and cheerful through a lip operation and is now a gurgling, giggling tot always full of smiles for everyone. She now has her big palate operation coming up.

Of course, each and every milestone, from a new tooth to the first word or step is celebrated by Grandma too.

And what’s also so nice about grandparenting is seeing your own children grow as parents and thinking, well, I must have done something right.

Christmas will be especially bright – and hectic – this year with my fourth grandchild, a boy, due Christmas week.

That will be another little hand to slip into mine and say “Come on, Grandma, let’s go!” 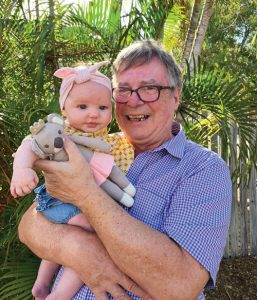 “IT’s a totally different relationship – total care without total responsibility”. “It’s unconditional love without the 24/7 commitment”. “It’s a huge event in your life that doesn’t necessarily change the way you live”.

That’s just some of the (free) advice from friends and relatives who are seasoned grandparents. And, sure, we eagerly anticipate those days when we are free to lavish love and attention on a new little one – and hand her back when it all gets too demanding.

With granddaughter Lila, our first grandchild, just 48 hours old, we set ourselves to scouring the internet for grandparenting sites – there are many, some useful and some less so – while fielding helpful advice and suggestions.

It’s difficult not to regard this tiny new arrival as an extension of ourselves but of course that’s not the case. And little Lila’s mum and dad know more about parenting than we’re ever likely to know – until, that is, they have to ask.

And now they’re finding, as every parent has done since babies began, that these adorable but demanding little beings don’t arrive with an instruction manual.

An entire three-way relationship begins to develop: “Of course you can make use of our experience, but just don’t hold us responsible for anything.”

It’s at once liberating and deeply worrying. Even though, as every experienced parent can testify, babies are much tougher than we give them credit for, that doesn’t help lower the stress level.

Our darling granddaughter lives in Sydney we still “talk” several times a day through the wonder of technology. She’s beginning to recognise those faces on the screen that try to coax her into a smile.

Oh yes, we’re quite certain of that and nothing will change our minds.

My grandmother, who did much of the child rearing in our family as both parents worked, was born during Queen Victoria’s reign in a tenement in Dundee, Scotland.

There was no doctor, no midwife and the experienced mother from across the hallway did the honours supported by several of the other women in the tenement. She was laid in a handmade cradle and had handmade toys for later.

My granddaughter arrived in this world in a brightly lit birthing suite full of gadgetry and expert personnel. But she cares about her surroundings about as much as my infant grannie did.

Anyway, why take chances when you don’t have to? (A stroll around any of our older cemeteries will give an insight into the number of infant deaths 100 years ago. It’s a sobering and humbling experience).

So, our new arrival is born into to a 21st century crammed with electronic wonders and with access to vastly enhanced medical knowledge. And she doesn’t care.

But we do. This little one won’t know a thing about those precious early moments of her life  – at least until she gives her own mum a grandchild. 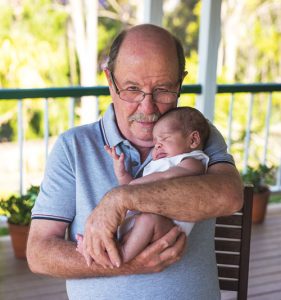 MY first grandson was a long time in the making, coming as he did almost 17 years after the birth of the first of four granddaughters and at the end of 48 hours of labour.

And even then, he had to be welcomed into the world via caesarean section; his exhausted mother Romi could push no more.

Rex Raj Moipi Thomas – his name acknowledging his New Zealand, Indian and Papuan heritage – arrived at 1.06am on October 30.

He’s very likely to be taller, darker and more handsome than me. Quelle surprise.

When I emailed a few friends to tell them of his arrival and his birth weight – 3.4kg compared with my 3lbs 4oz – my towering Tasmanian mate of 40 years replied “Weight OK, length ???”.

His subtle dig led me to wonder how I would measure up in another way.

Would I be able to come close to the example set by my paternal grandfather?

I carry with me memories of school holidays spent in the care of the kindest and gentlest of men.

Grandad Thomas, widowed in his early 60s, had some natural advantages.

The view from his kitchen/dining room window was of a striking limestone formation and excitement came in the form of limestone chips that landed on his roof after a loud whistle warned of an impending blast in the nearby quarry.

Sometimes we would spend the day in his smithy, where I would be detailed to man the bellows and then watch in awe as Grandad crafted ceremonial swords for his Masonic Lodge.

If the weather was foul, we would often stay in and play endless games of draughts. Grandad could sense when my enthusiasm was flagging and let me win an occasional game.

But often we went rambling in the limestone reserve or over adjacent farmland, sometimes collecting water cress for dinner.

On the front lawn, Grandad indulged my love of football and cricket, although he was nowhere near competitive enough for my liking.

He would send me off with an impossibly heavy sledge to collect pine cones for his fire. No matter how great the burden, I never dreamt of letting him down.

It was a simpler time, without mobile phones or television. Not that it mattered. I was ready for bed soon after dark most days.

So much has changed in 60 years. Rex has the most loving of parents in my youngest son Ray and wife Romi but the world is full of new challenges.

I want him to be as caring and witty as his 16-year-old cousin Kalesha, for example, yet I worry that racial prejudice seems to be on the rise again and, even worse, climate change might threaten our very existence.

At the very least I want Rex to have a solid grasp of science and be sceptical of the outpourings of journalists with an agenda, politicians and shock jocks.

Chances are that I won’t be around to see him reach adulthood.

My hope is that there will still be a world worth inhabiting. Is that too much to hope for?

It’s not just cricket
Dance into the new roaring ’20s