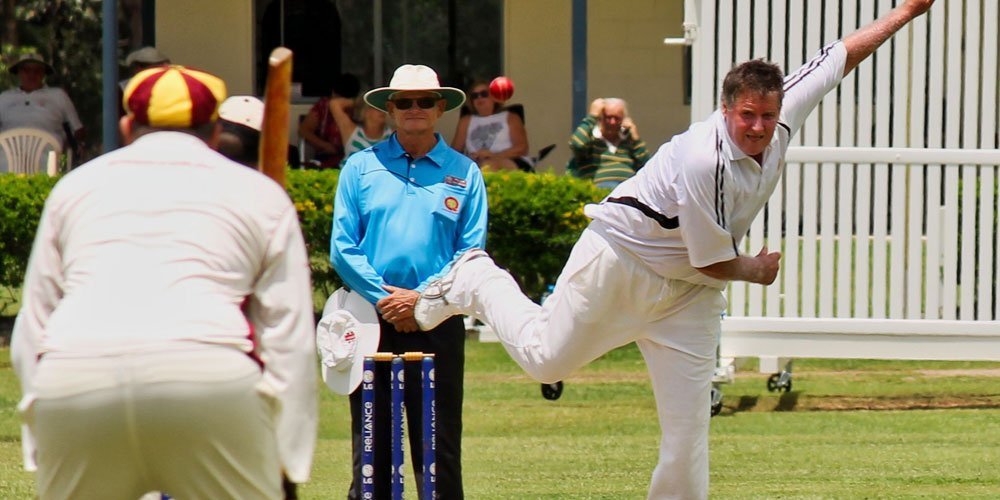 It’s a soft autumn day on the Sunshine Coast.

At Elizabeth Daniels Park, Lindsay’s coffee van is parked between the off-leash dog enclosure and the bowls club. His customers are heading to the bridge club, croquet and basketball courts, yoga or Irish dancing classes.

But some are arriving with bats, hats and helmets and serious intent.

They are the members of Veterans’ Cricket Australia and come from all walks of life and all persuasions, to share a common goal.

Many have represented Australia in cricket, golf and tennis, but more are swinging the bat again after a lapse of 40 years.

These “newbies” are mentored by the star players, training together twice a week and joining forces in matches during the season.

No doubt returnees to the game get a buzz when elite sportsman Kerry Emery OAM arrives, parking by the oval that bears his name.

He makes no bones about the fact golf was his job and cricket first love.

McWhinney ribs fellow elite sportsman Neville Kratzmann about his knees as they tote their cricket bags to the practice nets.

If there’s a Veterans’ Cricket media darling it could well be microbiologist Professor Peter Timms.

Tall, graceful, and captain of the first division side, and Sunshine Coast club captain, Timms works and plays to achieve his best.

As a scientist he is the world authority on chlamydia in koalas.

“I get calls from places like the San Diego Zoo, but this is just 25 per cent of my work in this field,” he says.

A former A-grade player, Timms admits he is still competitive, which he sees as an advantage for those who haven’t been on a pitch for decades.

“Those who have played social cricket and want to improve their skills get some coaching while players like me who still want to play at the highest level can.

“It’s social cricket, but with regulations as we do have rules and umpires.

“We set out to let everyone play to the level they want, play their best, and enjoy the day,” he says.

For unofficial club photographer, Ron Robinson (recently his computer froze with 51,000 cricket images) getting back into the game has, in his opinion, given him a longer life.

Earlier this year, Ron collapsed and left the field in an ambulance.

Heart surgery, three stents and three months later, he was back fitter than ever.

“Dropping from fatigue during play, I believe, saved my life,” he says. “For months I had been telling my doctor I was tired but this was put down to the fact that I’m nearly 70.

“Well, spending an hour bowling proved blocked arteries not age was the issue.”

The litany of pulled muscles, knee and hip replacements, broken ribs and heart surgery is a shared bond among these players and certainly not a deterrent.

In August, the association introduced The Madsen/Reimers Shield, in recognition of two of the core founders of the now eight clubs in southeast Queensland.

Typical of the Division One players is retired Toowoomba police officer, Ian Reimers, who first picked up his bat aged nine, and has remained involved in the game at a community level ever since.

He is now touted as an example of beating the age barrier following two total bilateral knee replacements in August 2016. He was back playing a year later.

“It is difficult to compete with young players, so we don’t,” he says. “We are back in the game at our level and having fun.”

Most get through the season with nothing more than a few massages to quieten sore muscles.

But then there’s Maroochydore jeweller, John King, who has been with the over 60s team for three seasons and has managed to log just about every injury possible.

Most recent new member Mark Priest, a personal fitness trainer, is one of the many who hasn’t played since his 20s.

In his first season he has enjoyed a few physio sessions after pulling a calf muscle by flying high for a catch (described in the monthly newsletter as:  “… a screaming caught.” )

“I just love it. Here I am out there with some of Australia’s greatest sportsmen, and they are so generous with their time and advice,” he says.

Mark’s goal is simple – to be selected to represent Australia in the United Kingdom against the UK veterans.

Division One is for the most competitive, the former Sheffield champions, while Division Two is for the bucket list members.

Kerry Emery, who is president of Veterans’ Cricket Australia and a member of the Sunshine Coast team, says a third division is on the cards – one for newcomers.

Those who have the passion but not the skills of the others.

“We could even include the over 80s, as we do have a few who do not want to stop playing, and neither should they, as we are all for keeping them moving,” he says.

“Our goal is to keep fellas playing cricket from when they were young kids, right throughout their life. This is a sport for life.”

From the professionals to the “bucket list” amateurs there is a unanimous view – the friendship and camaraderie engendered in being part of this team, is just as vital as hitting a six.

As McWhinney points out, these players have decades of life experiences to share.

“We might not have crossed paths until now, but we have walked the same roads,” he says.

“Getting in the car and travelling for two hours, you have a really good talk; something you probably wouldn’t do when young.”

“Being in veterans cricket helped me overcome the issues related to the depression, which is of course, something not many ever talk about,” he says.

“I see vets cricket as a form of Men’s Shed, as you would be surprised at the different topics we talk about when we are supposed to be practicing.”

Besides contributing widely to the debate on depression, Mike also edits the association’s lengthy and colourful monthly newsletter.

A fulltime carer for Lynn, his wheelchair-bound wife, Mike is not the only player caring for a family member to benefit from a much-needed break and the positive support of his teammates.

Ian Reimers sees inestimable value to the individual, the family and the community in his Toowoomba Veterans’ Cricket team.

“It’s a Men’s Shed with bat and ball, and while we’re having fun at the sport we love, we are sharing life experiences,” he says. “Not long after we formed the Toowoomba team, I met a woman who said her husband would love to play cricket but was a bit shy.

“I rang him and got him playing and she has since told me he is now a much happier man.”

Well known in the sporting world is Mark Brady, manager of the Noosa Springs Golf and Spa Resort.

Mark gave up A-grade cricket 15 years ago because he says, “I was too old and it was too hot.”

Turning 50, (he is now 60), Mark joined the Veterans to play socially because “they only play in winter.”

Once a champion, always a champion. Mark and Phil Drescher were the two Queensland players selected this year to represent the Australian Veterans in the United Kingdom against the English over 60s veterans. England won two of the three internationals, and our lads beat Pakistan.  Phil admits the UK players are “seriously good at this game, but we will get them eventually.”

To that end, this grandfather, retired concreter and former A-grade player is out there still hitting sixes and preparing for next September when the UK teams arrive in Australia.

After a recent charity game at Yandina (funds to prostate cancer research), Mark Priest admitted: “It’s a bit scary bowling to Phil, McWhinney or Peter Timms but they are so nice you get over it.”

As “Just Clarkie” a cricket tragic and groundsman for the Maroochydore Cricket Club wryly observed: “Our fastest ball might be slower than the slowest in Test cricket, but you still don’t want to be anywhere near it.”

This can be seen by the dents in the shed closest to the practice nets. 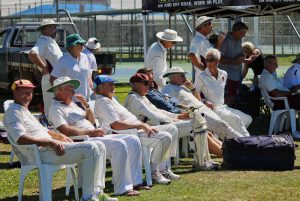 September 2020 will see a first for cricket when Veterans’ Cricket Australia hosts 32 over-60s cricket teams from seven nations. The championship games will be held in southeast Queensland from Caloundra to Noosa. Veterans’ Cricket Australia president Kerry Emery said there would be 400 players along with their supporters from England, Wales, Pakistan, Canada, New Zealand, Sri Lanka and South Africa. “Over four days, 32 teams will compete at 16 venues, which means every community in the region with a cricket oval will be involved,” he said.

In a manner of speaking
It’s simply grand