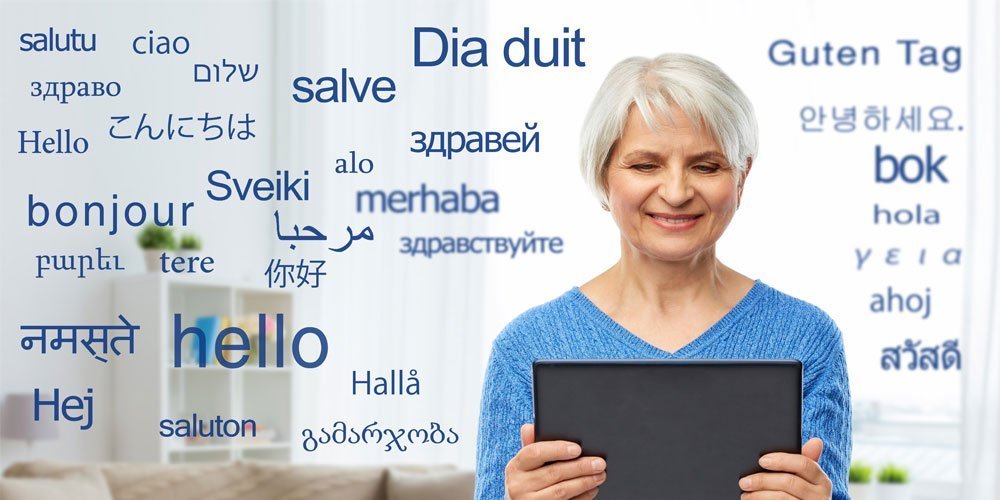 Never has there been a better time to stimulate your brain and have some fun learning to speak another language, than with the new technology in retirement.

Take Jeanette Drewes for example.  She has booked her next trip to Italy and this time she is going to spend a month at a top cooking school.

Jeanette loves everything about Italy – the art and architecture, the music – and especially the food and wine.

“I have done a couple of trips which included cookery lessons,” she says. “But these were for tourists and no Italian was needed.  At the cooking school it will be different. And when you love a country like I love Italy you can’t get a real understanding of it without being able to speak the language.”

Jeanette drives to her hospital administration job three days a week listening to Duolingo, the most popular of the language learning apps which delivers more than 30 languages via your mobile phone and other devices.

She also does an online course with face-to-face tuition as well as a regular class with other students.

“I love the class and the interaction with real people, but I need more than once a week,” she says.

Having an app which can be used at any time at home or during five-minute breaks at work is the best way to go.

“I get some strange looks when I pull up at the lights, muttering “dov’e l’ufficio postale?,” she says, “But luckily today we’ve grown used to seeing drivers muttering into their hands-free car audio systems so I don’t feel embarrassed.”

Jeanette is one of thousands of Queenslanders who have taken up the challenge of learning another language late in life because digital technology has made it easier than ever before.

We’ve come a long way from the linguaphone records of yesteryear which basically taught you what to say and how to say it but gave little idea of what to do if somebody spoke back to you.

Today we can choose to learn the traditional way through a language school or private tutor (group or one-on-one) or we can do it digitally. Or we can do as most students do, combine the two.

Relatively few seniors want to spend time and money trying to acquire a university language degree, but anyone can afford to take advantage of local language schools and online courses.

There are at least two dozen Brisbane private providers of various languages with both the Gold and Sunshine coasts adding more to the list.

One of the largest is LaPont Language Centre which offers a range of flexible options in at least 10 languages; with regular classes for small groups.

Founded 10 years ago by Catherine Alapont, it has five locations in the CBD, Southbank, northside and bayside and will soon be opening another on the Gold Coast – language learning is booming!

Catherine encourages senior students to take advantage of its flexible program and regular French immersion tours where participants stay in a chateau in Burgundy and enjoy French food, wine and culture while studying the language.

She says that among her older students is a couple in their 80s who plan to spend six months travelling around France and want to be able to have a conversation with the locals.

A popular free or very low cost provider of language learning is University of the Third Age which caters specifically to retirees. Retired criminal barrister Peter Lancaster attends a weekly U3A Japanese class because, he says, “he is so in love with everything Japanese” and sees the language as a way of understanding the culture.

He has an interest in Buddhism and next year plans to walk the way of the 88 temples on the island of Shikoku.  While Japan’s major cities make it easy for English speakers to get around it is very different in rural areas and Peter hopes to be sufficiently conversant with the language to make travel easier and enhance his overall experience.

The U3A of which he is a member also offers Spanish, French, German, Italian and even Latin!

Sue Morris does them all, and in the past has taught the French classes.  Now in her late 70s, she has a lifelong love affair with languages. To Sue it is less about achieving fluency in any one language and more about keeping her brain active – and there are few things more demanding of the human brain than retaining several languages.

According to Edinburgh University researchers, monolingual patients tended to develop dementia earlier than those who spoke two languages.  Lead researcher Thomas Bak noted that learning a new language later in life is beneficial because it helps exercise the brain.  No surprises there.

What DOES emerge from studies about seniors learning new languages is that while it’s true they find it harder to remember new words than do teenagers, they bring the same advantages to language study as they do to other forms of learning: life experience, motivation, positive attitude – and time.

The hardest thing for older people is not learning new vocabulary but how to pronounce it.  This is a particular problem for Australians because we have never taken learning another language very seriously.  European Baby Boomers learned a second language from early primary school (usually English; or French in the case of English children).

Even in recent years, a second language is not part of our curriculum nationally, but left to the choice of individual schools, leading to a lack of consistency.  Most of us have never learned to unselfconsciously put aside those broad, nasal Aussie vowels which inhibit good pronunciation of languages other than our own.

The other disadvantages of age are impaired hearing and sight, so it’s important to choose a learning program that compensates for this.

And that’s the beauty of today’s online courses – they have great graphics and you can easily control the volume from your device until you’ve got the pronunciation just right.

Any good language teacher will tell you that it can’t all be acquired online – as Catherine Lapont says, “nothing beats face-to face”.

Perhaps the best method to learn a language correctly and quickly today  is to combine digital resources that you can use in your own home in your own time with at least one weekly class where you have the advantage of social interaction, competition, homework suited to your needs  and a teacher who can respond immediately to questions and problems.

Good friendships have been made among senior language students, sometimes resulting in group trips to the target country.

“Last year five women and one man from our Italian class walked the Cinque Terre in Italy,” says Jeanette Drewes.  “We already knew each other well and shared the same interests so it was a great experience.”

Dot H. never particularly wanted to learn a second language but now has a compelling reason for doing so – her son, who works in Jakarta, has married an Indonesian girl and she and their two children speak little English.  So Dot, in her late 60s,  is studying Indonesian because she visits regularly.

Young Australians today are no longer destined to marry the girl next door or even someone from the same town. They are just as likely to partner up with someone from a very different, non-English speaking culture, producing children who may find it hard to communicate with Aussie grandparents.

An encouraging number of those grandparents are rising to – and relishing – the challenge of taking on a second language late in life.

“I’ve found this very stimulating,” says Doug Ross whose grandchildren live in Germany.  “They actually speak pretty good English but when I go over there, I find I get a much better sense of their everyday life and the country as a whole by understanding the language.

“I always wanted to learn another language and now I have an incentive.”

Doug, 73, started with  German language classes at his local U3A and now attends regular classes at an accredited language school where he enjoys the competition from fellow students, most of whom are about his age.

And despite the commercially-driven urge to learn Japanese and Chinese a few years ago, it is the European languages that are having a resurgence in popularity among older students.

A survey found that French, Italian, Spanish and German are the most popular languages with Japanese and Bahasa Indonesian coming next.  Not many, it seems, are keen to tackle the tonal challenges of Mandarin.

It used to be the more adventurous-minded young Australians who travelled overseas in search of adventure and a wider life experience. Increasing affluence enables today’s grandparent generation to explore the globe, often with very specific interests in mind.

This has sparked a boom in learning languages other than Strine.

But whatever our reasons for taking on a second or even third language and whatever resources we use, language teachers agree there are no short cuts and no cunning apps that can make us learn faster and better. In the end it still comes down to hard work and repetition.

There are several clever digital translators on the market which offer more language options than Babelfish ever offered the space wanderers in Hitchkiker’s Guide to the Galaxy.

Products such as Mortentr and the acclaimed (but obscurely named) Muama Enence can enable you to speak to another person in their language and have them reply in yours – and much else besides.  Their accuracy, though not always perfect, is more than acceptable although use is limited to well-connected locations.

These devices are useful for businesspeople and travellers but have nothing to do with learning another language.  You can use them to get around a foreign city but they are no substitute for being able to  sit over a local beverage and chat with the locals about anything under the sun.

When it comes to acquiring a new language, like so much else in life, it’s all about the journey and not just the destination.

The world in our backyard
Lifetime’s memories plague the hoarder