You don’t have to wear a tutu to Gretel Butler’s ballet classes for seniors but you get to stretch and bend and pirouette more or less gracefully to keep those ageing limbs, well, limber.

Gretel, 76, a dance teacher and daughter of famous Australian ballerina Moya Beaver, started teaching ballet through her local U3A a year ago and it proved so popular she had to start a second class.  Her students range in age from 50 to 80.  And yes, some of them are blokes!

She says the main benefits include an improvement in muscle tone, core strength, flexibility, balance and posture. Finally, there is the wellbeing and joy that comes with self-expression through moving the body to beautiful music.

Bill James is one of Gretel’s students.  A tall man and very fit for his years, he says he has always loved ballet music but had never even seen a ballet until about 10 years ago.

When Gretel started her classes and, having seen a TV program about the benefits of ballet for seniors, he thought he’d give it a go.

At 75 he’s not the oldest bloke in the class. Fellow student David Jeffrey is 80.

“It’s not about dancing, it’s about exercise,” Bill says. “The emphasis is on stretching, breathing and disciplined movement.”

He encourages other men to join senior ballet classes if they have the opportunity, assuring them that: “There’s no points, no lifts and no tutus!”

“Just stuff a sock down your tights and come along,” he jokes

Maybe trying to execute a perfect pirouette isn’t for you but dancing of some kind is inherent in our culture, as in all others, and those of us who once rocked around the clock, twisted the night away or boogied to Saturday Night Fever still like to get up there on the floor and, in the words of the old Cliff Richard song, move it.

Evidence is in the proliferation of dance studios, groups and festivals that can be found from Noosa to Coolangatta in a variety of styles and ethnic traditions.

Television revived an interest in ballroom dancing a few years back and though that craze has died, it is still very popular, especially among older citizens wanting to brush up their foxtrot and waltz skills.

Many retirement villages and other senior living complexes encourage this type of dancing.  Widower Doug Tate, 70, met his second wife Cissy at a dance studio on the Sunshine Coast a couple of years ago and they’ve been tripping the light fantastic together every week since then.

“It keeps us close and if I totter she holds me up,” Doug says.

Salsa is the liveliest form of ballroom dancing and on any weekend you can hear the irresistible pulse of Afro-Latin rhythms coming from our parks and public gardens.

Originally Cuban, Salsa has become a generic term for the many dance styles that developed in South and Central America where the drumbeat and thrust of old Africa met the more fluid Latino body movements.  There are many different styles of salsa and along with mambo, cha-cha-cha, bossa nova, rumba and samba they all make up the Afro-Latin dance scene that we know and love today.

One great thing about this style of dancing is that it can be done by any age group from kids to great-grandparents – just as it is back in Cuba and Colombia where you’ll find many an aged pensioner who can tell you it’s the music and the dancing that keeps them young.

Southeast Queensland has a surprisingly large number of communities from Brazil, Argentina (where tango is still king), Central America and even the Caribbean and they gather regularly at riverbank venues such as Southbank Parklands or on ocean foreshores.

Dee Beetson lost her husband two years ago and was recently persuaded by a friend to try first a Zumba dance exercise class and then take up the latest dance craze, Zouk, which originated in Brazil.

“Everyone is so friendly and you soon loose your shyness and inhibitions when the music and the rhythm carry you away and you are concentrating on your steps,” Dee says.  “One of the good things about being old, (she is in her mid-60s) is that you don’t care so much what people think of you anymore.”

Latin dancing is fun but if you find it too hard on the knees and hips  then you can revisit the past in those older forms of dancing that loosely fall under the banner of “folk” or “country” and are delightful to perform without being too strenuous.

What’s more you don’t necessarily need to take along a partner because you are dancing as part of a group.

Both Aussie bush dancing and American square dancing remain popular in Australia but it’s the resurgence of early English country and the more refined and musically complex society (think Jane Austen) dances, as well as colonial-era styles that are drawing both participants and onlookers today.

Sheree Greenhill has taught this type of dancing for many years, as well as the popular American Contra style with its mixed Scots-Irish-English heritage.

Her Dance Kaleidoscope group has been going for about 20 years. There is an invitation-only Friday group which has been dancing together for many years and a larger Sunday group where newcomers are welcome.

Dance Kaleidoscope has performed at social functions, schools, weddings, festivals and public occasions such as the 150th anniversary of the opening of Queensland’s Parliament. They learn, practice and perform dances from 1650 to 1820, wearing the appropriate costumes and taking part in the History Alive historical camp-outs where trying to speak and behave “in period” is all part of the fun.

It is this social interaction which makes English period dancing so relevant to older people, as well as the grace, poise and dignity inherent in such dancing.

The benefits in terms of circulation, co-ordination and helping to prevent the development of osteoporosis are obvious but Sheree adds the fact that endorphins released in the brain during dancing act as natural painkillers.

“Even those with chronic pain issues can still enjoy English dance,” she says, and also points to research that shows dance, along with music, is one of the activities observed to stave off dementia.

And because this is an essentially co-operative activity with several (usually at least eight) dancers taking part, the social bonds become very strong.

“We have become more like a family,” Sheree says of her own group, which for years now has got together for other social activities besides dancing.

Sexes and ages can mix freely – one of Sheree’s pet peeves is how society divides us from infancy into age groups that don’t mix. At Dance Kaleidoscope, ages range from 12 to 84 and she believes that both young and old benefit from mixing with each other.  This is the sort of dancing you can do with your grandkids.

Sheree is happy to help those interested in this kind of dancing start their own group. The important thing here is to teach people how to “call” the dances and she says there are resources available for this as well as learning the steps and patterns.

Sheree’s friend Iain MacPhail has been dancing with the group for years, in partnership with his wife Allison whose skills and sheer love of traditional English and Australian dance forms was celebrated at her memorial service late last year.

Iain, a retired mechanical engineer, is intrigued by the intricate patterns involved in this type of dancing, some of them based on ancient Celtic symbols, and agrees that dancing these patterns helps focus the brain as well as the feet.

“And, of course, there’s the music,” Iain says.  “The heart of the dance.  Music motivates and one dances to the melody with this kind of dancing and not just the beat.”

One of the best places to learn dancing at low cost is the University of the Third Age or a lifestyle organisation such as Lively 50s Plus.

Line dancing is the most popular style here, especially with women who love to scoot those western-style boots but, like Gretel Butler’s ballet for seniors, other dance lessons are on offer.

Ask any older person today why they have taken up dancing and they’ll give you much the same answer – it’s a lot more fun than other forms of exercise!

Some, like Dee Beatson, feel they are re-connecting with their youth when dancing was the main form of entertainment and, as she puts it, “the best way to meet a bloke!”.

Others are trying styles that they had never tried – or even heard of – before. And loving it!

So, if you are the kind of person who makes New Year resolutions, why not make it your resolution this year to dance your way into the 2020s. 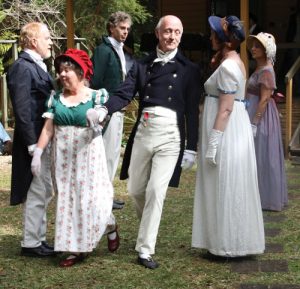 GIVE it a go

SOUTHEAST Queensland abounds with opportunities to learn and participate in almost every type of dancing, including the many ethnic community groups that make up today’s rich social mix.

Here are some contacts, but new groups are always being formed so it’s worth doing your own website search.