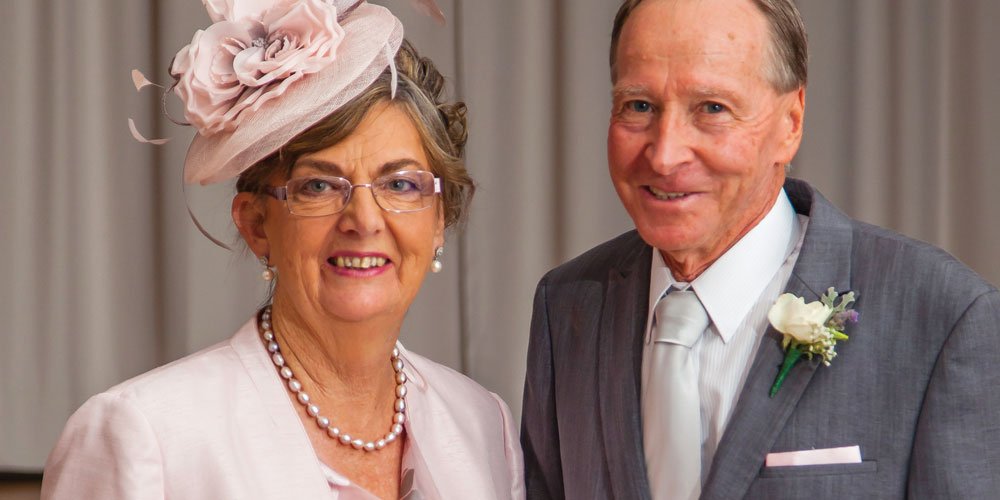 Barb and Roy Inwood on their wedding day four years ago.

Barb chuckles when she thinks back on her “very, very happy” wedding day almost four years ago to Roy Inwood in a little church on the Sunshine Coast.

They bucked the growing trend in Australia of a civil marriage ceremony as Barb is a churchgoer, but unlike her first wedding, also in a church, the differences didn’t end there.

This time around, Barb chose a simple but elegant outfit and her son to give her away; her granddaughter was a bridesmaid and one of Roy’s sons was best man.

The entire congregation turned up and joined with family and friends to wish them well.

“It was so funny because nearly everyone was grey-haired, with walking sticks or walkers,” Barb says. “We had more than a hundred. Everyone wanted to come.”

The frail arrived in wheelchairs. Those who had the good fortune to be under 50 Barb nicknamed “the young ones”.

Now in her early 70s, and Roy on the wrong side of 80, they enjoy a rich relationship that didn’t seem possible for two people expecting to spend their last years on their own.

Unbeknown to one another and around similar time frames, illness had claimed both their spouses – Roy after 50 years of marriage and Barb after almost 40.

A time of grieving followed until their children stepped in and suggested they start reconnecting with life through dating app RSVP.

Barb thought her children’s wisdom very “modern” and hoped she would meet someone local. It wasn’t long before Barb and Roy found each other online and met in person over coffee.

They immediately hit it off. The rest, as they say, is history.

“It’s been a very happy time and we’re so grateful that it’s come,” Barb says.

“We both wanted some company in our old age. I wanted to nurture someone and Roy likes to be nurtured.

“We go out to dinner once a week. We’re together almost 24/7. When a song comes on (the radio) – we were both dancers when we were younger – we dance around the lounge room.”

Special Counsel Peter Porcellini of CRH Law, a firm that specialises in elder law, doesn’t always see the success stories of late-life relationships in his line of work but has a good understanding of what drives people into them.

“People are living much longer and living part of that in a state where some loss of capacity has crept in … and they’re more likely to be living longer without a spouse,” Mr Porcellini says.

“You don’t need people to hate each other and be divorced at that stage of life in order for remarriage to be an issue.”

Incompatibility can dawn on couples in older age if they were married young and children came along quickly.

Once saving for retirement and minding grandchildren no longer consumes their lives they might suddenly realise they were never meant to be.

WHETHER it’s the fallout from the rising scourge of dementia or loving relationships that develop into one of care only that’s fuelling the search for companionship, the big-ticket items for any couple entering a new relationship or a marriage are the same – how will a current will or enduring power of attorney be affected.

At considerable cost, Barb and Roy had a lawyer draw up a Binding Financial Agreement when they started living together and then on further legal advice, had a new agreement done when they were married.

The agreement, which can be between de facto, soon to be married or already married couples, states how assets, financial resources and liabilities will be dealt with during the course of the relationship and how they will be divided if the relationship breaks down.

They also made new wills to assuage any inheritance concerns of their children.

Even if children are not concerned by inheritance issues in the event of a parent remarrying, Mr Porcellini says any new relationship is going to affect a couple’s financial circumstances, including for example, a self-managed superannuation fund, a family trust or family company.

“It’s my job to tell a client what they can do, what risks they face and give them all the information they need to make their own decision,” he says. “We are obliged also to give advice about what opportunities there might be to restructure their estate so as to make claims (after death) less attractive.”

A civil marriage celebrant performed four out of five marriages in Australia in 2018.

BRISBANE celebrant Eileen Riley has been in practice for more than 25 years. Just over 10 per cent of the marriage ceremonies she has performed have been for couples with one or both aged over 55.

“At this time they’ve had the big wedding when they were younger, now they’ve met somebody in later life they want something very simple and they want to be married,” Ms Riley says.

“Where there are children against the marriage they’re generally very quiet, simple affairs, particularly if it’s an older gentleman who is taking up with a younger woman about the same age as his children.”

She says older couples often have no attendants and a private venue is chosen, such as a friend or relative’s home or a local park. Unlike younger couples who prefer to write their own vows, older couples are happy with traditional vows.

The need for financial security can lead couples to marriage, particularly if one member is extremely old or unwell.

“I’ve had some weddings where people are terminally ill and they just want to make sure everything is safeguarded for their partner because there are children waiting in the background ready to take the house,” Ms Riley says.

“Everyone I see has their own road to travel to the point in the relationship where they have decided to get married.”

Regardless of their age, she asks every couple if they have a will because many couples are not aware that the minute they get married their current will becomes null and void.

HOLLYWOOD celebrities have been known to marry, divorce and remarry their exes; sometimes being separated for decades before reconnecting.

It’s generally the road less travelled in later life but not exclusively reserved for the rich and famous. So why rekindle the romance with an ex-spouse?

Sonja and Brian Bester have asked themselves this question more than once since they remarried each other four months ago after being divorced for 14 years.

To find the answer Sonja goes back to 1996 when they were in their 30s and emigrated from South Africa to New Zealand with their two young daughters.

They had plans for a new life, but the move left them broke and Sonja pining for her family and friends.

With no internet or mobile phones to keep them connected with family back home, Sonja became despondent and focused her disappointment on Brian.

“Although I had always loved him, I didn’t like him at the time,” Sonja says. “He didn’t live up to what he promised to do. We were going to be a close family and that never happened.”

In 2005 they divorced. A few years later Brian moved to Australia. Sonja stayed in New Zealand and moved on with her life, improving her job prospects and financial independence.

Meanwhile, Brian formed a series of relationships, some serious, while Sonja had no desire to date other men.

Once the pain of their divorce subsided they remained close and would spend Christmas and holidays together, often to the displeasure of Brian’s girlfriends.

In the years they were apart, Sonja would raise with Brian how she wanted her family back together.

“About two years ago when we came back from a holiday in the Cook Islands I came to the conclusion that it was never going to happen,” she says.  “I think I finally made peace with it.”

Sonja moved to the Mackay region last year to be closer to their children and grandchildren, moving in temporarily with Brian until she got on her feet.

On the third night of her arrival, she says, Brian – out of the blue – suggested they get married again.

“He had come full circle and realised that maybe it was better for the family and for me at this stage of our lives,” she says.

“Having someone when you’re older is important. I feel blessed that I can spend the rest of my life with the love of my life. We talk about the future and not so much about the past. It’s a bit of an adjustment for us but because I know him so well we’ve slotted back into our old routine.” 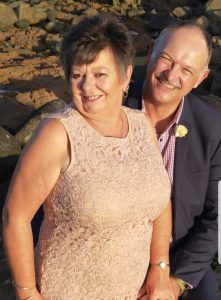