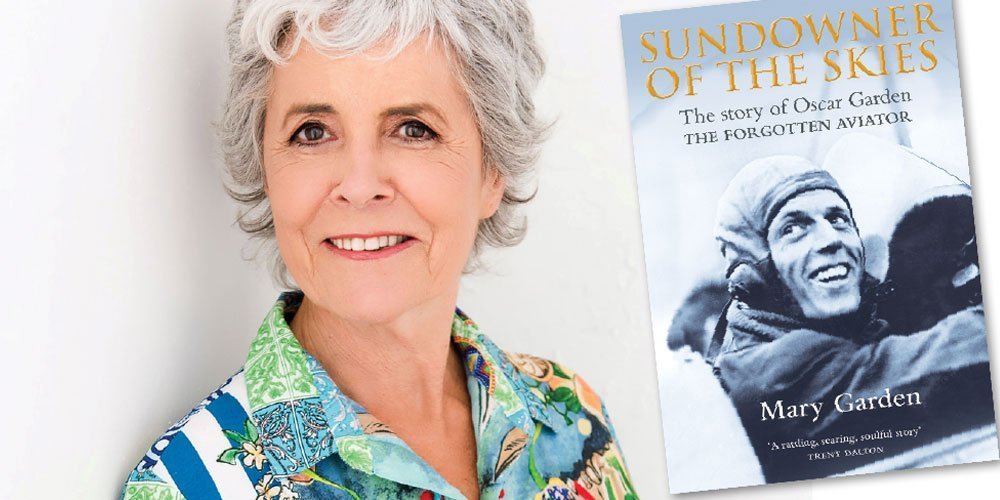 In 1930, Mary Garden’s father Oscar flew from London to Australia with just 39 flying hours under his belt.

Until then, his longest flight had been six hours. This one would take 18 days.

In Sundowner of the Skies The Story of Oscar Garden – The Forgotten Aviator Mary tells his story and explains why he made such a risky endeavour.

“There was definitely a pioneering spirit in the Scottish family,” she says. “Also, he didn’t want to pay for a commercial licence. He thought he would use the little money he had to buy a secondhand plane.

Once he was in Australia, he would have enough hours to apply for a licence.”

For Mary, this decision is in keeping with the father she knew. He could be reckless, foolhardy – and a miser.

Oscar was 27 when he walked into the aviation department at Selfridges department store in Knightsbridge and bought a secondhand gipsy moth.

There was only one person to see him off at Croydon. He didn’t want any fuss or fanfare and he didn’t want to be talked out of doing the flight.

The young aviator had to cross Europe, the Middle East, northern India and fly south down the Singapore peninsula. The final leg was  crossing the shark-infested Timor Sea.

His flight was a phenomenal achievement, especially for a novice pilot. At that time, only Bert Hinkler, Charles Kingsford-Smith and Amy Johnson had succeeded in making the crossing from England to Australia.

While other pilots such as Hinkler had financial support, publicity and big crowds to wave them off and welcome them in Darwin, Oscar chose to fly under the radar.

He landed in Wyndham southwest of Darwin, just over the Western Australian border as this was a shorter flight.

News travelled and soon the press was on to the story. They nicknamed him “Sundowner of the Skies” likening the aviator to a swagman who arrives unexpectedly at dusk and disappears at daybreak.

Oscar Garden went on to have a 20-year career in aviation. He flew the second flying boat from England to New Zealand for TEAL (Tasman Empire Airways Limited) the precursor of Air New Zealand. And that’s where he settled.

After World War II, he trained ex-air force pilots to become commercial pilots with TEAL and then, in 1947, he quit aviation with 10,000 flying hours under his belt and became a tomato farmer.

Mary remembers that he did not speak much about his flying career.

“My father had a complicated relationship with fame. He said he hated it and yet, he’d ask my mother, ‘anything about me in the paper today?’,” she recalls.

Beginning the project was daunting for her. There were no letters and no personal diaries but old newspapers from Scotland and New Zealand and aviation magazines made a fine start.  Over time, people came forward with photos and stories, family letters turned up and Mary became thoroughly immersed in the research.

Along the way, she has shown the same determined spirit as her father. The biography was rejected again and again.

Publishers told her that biographies of parents are common in the market but don’t compete well against celebrity biographies. Oscar Garden was unknown.

For Mary, this was the whole point. Her father is forgotten in the wider community, yet she found he is still known in the aviation world.

After 12 months, her story finally  found its place with New Holland Publishers and it was released in Australia, England and New Zealand in May.

Sundowner of the Skies The Story of Oscar Garden – The Forgotten Aviator  is now available in book shops and online. This month, she will head to New Zealand where it will be launched at the Classic Flyers Aviation Museum.